New users can claim their First Bet on Caesars up to $1250 with the use of promo code HANDLEFULL. 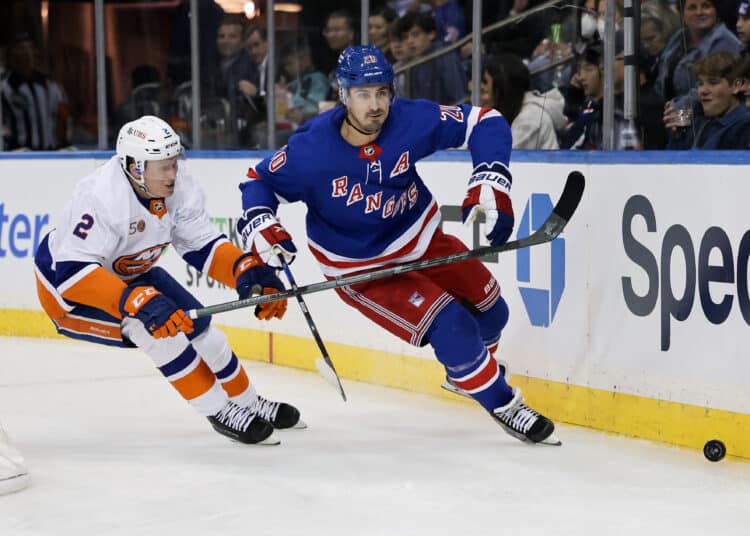 After suffering a hard-fought loss to the defending champion Colorado Avalanche via shootout on Tuesday night, the New York Rangers will be hungry to bounce back as they head into UBS Arena to take on the rival New York Islanders.

As New York‘s two NHL teams battle it out on the ice tonight, all new players at Caesars Sportsbook can claim their First Bet on Caesars up to $1250! What does this mean? Place your first bet with the site and if it falls short, The Emperor will have your back with a full refund in free bets! Use the Caesars promo code HANDLEFULL during registration and get started with one of the industry’s best sports betting sites today!

Caesars Sportsbook is offering all new patrons the welcome bonus offer of a lifetime. To claim your bonus, start off by signing up for a brand new Caesars account using the promo code HANDLEFULL.

Once inside your verified account, make a deposit of at least $10 or more. Your first bet with the site must be greater than $10 in order to qualify for the promotion.

Within the first 30 days of account creation, place a wager of $10 or more on any sporting event listed on Caesars Sportsbook up to the promotional cap of $1250. You can wager more than $1250 on your initial bet with the site; however, the promotion will be capped at $1250.

If your bet is settled as a loss, Caesars will reimburse your lost stake with a 100% refund in the form of free bet credits. All free bets will arrive within 48 hours and must be used within 14 days of receipt or they will expire.

Caesars hands out one rock-solid free bet equal to the entirety of your lost stake, meaning it must be used in one shot – the free bet cannot be broken up. Lastly, the free bet’s stake will not be returned to the player win or lose. If your free bet wins, you will only take home any winnings acquired.

But wait…there’s more! As an added bonus, Caesars is also hooking up all new users with 1,000 Rewards Credits AND 1,000 Tier Credits regardless of the outcome of their first bet. As long as you register using the Caesars Sportsbook promo code HANDLEFULL, you will receive this generous bonus package. Allow up to 7 days after account creation to receive your credits, and begin reaping the benefits of Caesars Rewards!

The New York Rangers (3-2-2) are in desperate need of a win after running into a bit of a cold streak over their previous three contests. After falling to the San Jose Sharks in overtime at Madison Square Garden last Thursday, New York was clobbered at home by the Columbus Blue Jackets as a big-time favorite on Sunday, losing 5-1.

Following last night’s 3-2 loss to the Colorado Avalanche in a shootout, the Broadway Blueshirts will look to get right tonight as they take on a familiar opponent in the Islanders at UBS Arena. Things are certainly not going to be easy for the Rangers, as they are playing tonight’s game on the second half of a back-to-back, whereas the Islanders have been off and resting since Sunday evening.

This matchup has also not been very favorable to the Rangers over the last two seasons or so, with the Islanders winning 7 of the last 10 meetings between the two teams. During the 2021-22 regular season, the season series ended in a 2-2 split; however, it was the road team coming out on top in all four games.

As a result of facing the Rangers on the latter portion of back-to-back games, the New York Islanders (2-4-0) are now listed as a respectable -140 favorite on the moneyline at Caesars Sportsbook. This may come as a surprise to some, as the Islanders have experienced a bit of a slow start right out of the gate.

Similar to their competition in tonight’s game, the Islanders will enter this matchup currently on a three-game losing streak. After jumping out to a solid 2-1 start to begin the new campaign, New York has failed to pick up another win and could be in major trouble following tonight’s game as they have an away game at Carolina, a home tilt against the Avalanche, and a three-game roadtrip to Chicago, St. Louis, and Detroit on the horizon. With all of that being said, this one is starting to feel like a must-win game for HC Lane Lambert’s bunch.

Perhaps the biggest storyline surrounding tonight’s game is who will be in net for the Rangers, as many expect superstar goaltender Igor Shesterkin to sit this one out after last night’s hard-fought battle with Colorado. If Shesterkin does remain on the sidelines, the Rangers will turn it over to former-Islanders keeper and current backup Jaroslav Halak. On top of two poor performances to begin his 2022-23 season, Halak has struggled mightily when facing his former team – in four starts against the Islanders since leaving them, Halak is winless with a record of 0-2-2.

Claim your First Bet on Caesars on any sport or event

If you can’t seem to pick a side in Rangers vs Islanders, have no worries. New users can claim their First Bet on Caesars on any sport or event listed on the mobile app or website. As long as you register using the Caesars Sportsbook promo code HANDLEFULL, your first bet will be covered by The Emperor! Here is what’s going down tonight: