Your first bet is on Caesars up to $1250 for Wednesday MAC football with use of Caesars Promo Code HANDLEFULL. 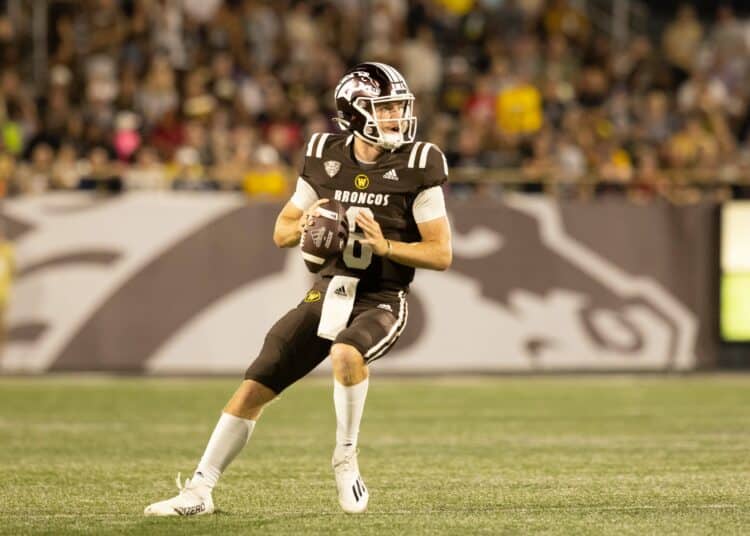 Another week in November means another beautiful slate of mid-week MACtion headlined by three games, all with a spread of less than a field goal!

With a bonus this generous, there are some details you’ll need to know to guarantee you receive your offer.

Joining one of the best sports betting sites in Caesars Sportsbook is an easy decision for any avid sports bettor. Just follow these steps:

If you qualify, your free bet will land in your account within 48 hours of your initial bet settlement. You have 14 days to use your free bet before it expires.

We get the pleasure of following up an enticing Tuesday slate of MAC college football with a potentially even better slate on Wednesday.

Each of the three games scheduled for tonight has a spread under a field goal, with our first game listed as a pick ‘em! There are plenty of MAC championship implications and teams vying for bowl eligibility on deck. Let’s jump into it.

We have a battle of MAC West bottom dwellers in Kalamazoo as the Huskies of Northern Illinois will visit the Western Michigan Broncos, hoping to climb out of last place in their division. Each offense has been a bit of an eyesore in conference play. Although this may be a bit of a lackluster matchup, you never know when it comes to a MACtion game, and it could present a solid opportunity to wager on the under.

Despite a MAC title last season and lofty expectations for this season, the Huskies have lost four of their previous five, with their lone win coming against an Eastern Michigan squad that almost suffered a 4th quarter collapse against 1-9 Akron last night.

The Broncos have had similar frustrations, winning two of their five in-conference games. The Broncos are currently fielding one of the worst offenses in all of college football, having been held under 20 points in three straight games.

Even if this game may be between two inferior teams, those games can often present the best betting opportunities.

The Bulls will head to Mount Pleasant in hopes of rebounding after their first conference loss in last week’s MACtion edition against Ohio.

It’ll be a tall task as the Chippewas are coming off their most impressive win of the season, defeating Northern Illinois handily by two touchdowns as an underdog.

If there’s one constant that’s true about the Chippewas: they want to build their identity around the run game. With their front seven, they are one of the best units against the run, while their offense is built around the prowess of star running back Lew Nichols III and establishing the run. Despite committing four turnovers in last week’s victory, the offensive line paved the way for 245 rushing yards against the Huskies.

On the other side, the Bulls moved into a 3-way tie for the MAC East lead after they fell to Ohio. Tonight is a must-win if they have any hopes of winning their first MAC title since 2008. The Bulls’ defense has been one of the best in the country in terms of creating turnovers, with 20 on the season. This could prove advantageous in tonight’s matchup, as Central Michigan will rotate through three different quarterbacks.

In Bowling Green, Ohio, the Golden Flashes of Kent State will try to pick up their first road win all year.

These are two teams heading in opposite directions, as Kent State had high hopes heading into this season. They were among the favorites to come out on top of the MAC East and win the title. Instead, they run into this bout at 3-6 and need to win out if they want to go bowling in December.

And despite all this, they are still a short road favorite over Bowling Green, who stands at 4-1 in the MAC and can tie Buffalo for the MAC East lead with a win tonight!

Bowling Green is the story of the MAC this season. Under head coach Scott Loeffler, the Falcons won three, zero, and four games in his previous three seasons. Although this is an experienced group, they were not considered a serious contender in the MAC. Heading into November, they’ve won three straight and four out of five.

The Falcons have not played in a bowl game since 2015 – with a win tonight, that can all change.

This will be a fun clash of the styles as the Golden Flashes rush for 211 yards per game, which is 18th in all of FBS. On the other side, Bowling Green’s defensive line has been relatively stout, allowing 157 rushing yards per game. Each passing defense has struggled immensely. If you are betting on this one, be sure to monitor the health of star Golden Flashes’ wide receiver Dante Cephas who is listed as day-to-day.

Although only one of these games resides in Ohio tonight, there will be plenty of viewers from the Buckeye State. While you’re sitting back, relaxing, and enjoying some Wednesday night football, Ohioans can take advantage of an awesome offer from one of the industry’s best.

Although Ohio is not yet open for business, it’ll be here before you know it! Legal retail and online sports betting begin on January 1, 2023, but you can pre-register with Caesars OH now to secure an easy $100 free bet and a chance to win some free Cleveland Cavalier tickets! Just use our promo code HANDLETIX upon registration.