New players at BetMGM Sportsbook can wager on Bengals vs Browns risk-free up to $1K using the bonus code HANDLETOP. 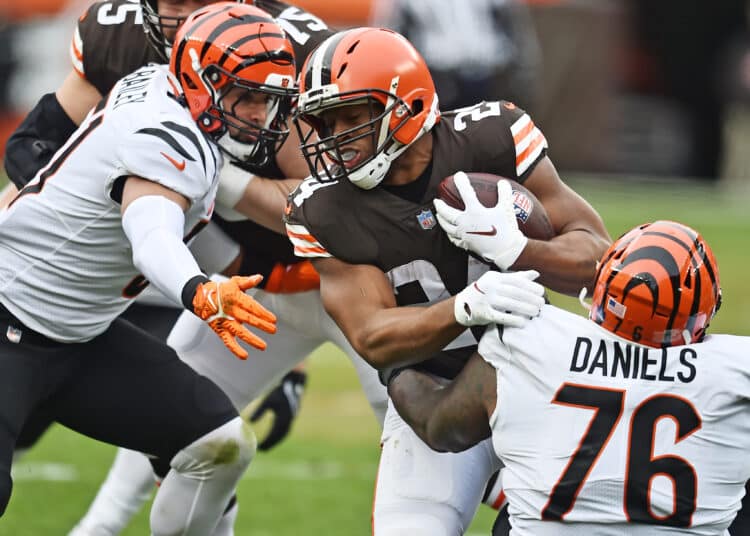 Happy Halloween! Week 8 of the NFL season will round out tonight with an extra spooky AFC North matchup between two teams draped in the color orange – the Cincinnati Bengals and the Cleveland Browns!

As the Cleveland faithful look to avoid a scare during tonight’s Monday Night Football festivities, first-time players at BetMGM Sportsbook can get in on the action with little to no risk! Using the BetMGM promo code HANDLETOP, all new sign-ups with the brand can place their first bet on Bengals vs Browns risk-free up to $1,000! And no – this is not a trick.

As is with nearly every other promotional deal in the business, there are a few terms and conditions behind this offer. For starters, you’ll need to be 21+ years of age and located in an active BetMGM Sportsbook state at the time of wagering. Eligible states include Arizona, Colorado, Iowa, Indiana, Illinois, Kansas, Louisiana, Michigan, Mississippi, New Jersey, New York, Pennsylvania, Tennessee, Virginia, West Virginia, & Wyoming.

If that $1K wager is marked as a loss, BetMGM will refund your stake in the form of free bet credits that will hit your account within 24 hours of bet settlement. If you happen to lose $50 or more, the free bets will show up in five separate increments, each worth 20% of the initial stake you lost. Once issued, all free bets come with an expiration date of 7 days – use them before they are gone. Lastly, the value of the free bet will not be included with any wagers cashed – you will only get to keep the winnings.

It appears as though QB Joe Burrow and his Cincinnati Bengals (4-3, 5-2 ATS) have officially gotten their swagger back, as the team now sits at 4-3 overall following a poor 2-3 start. Cincinnati looked especially dangerous in last week’s 35-17 dismantling of the Atlanta Falcons at home, marking their second consecutive victory heading into tonight’s divisional clash with the scuffling Cleveland Browns.

The bad news for Cincinnati? They haven’t defeated the Browns in a football game since Week 17 of the 2019 regular season, back when Burrow was still quarterbacking for the LSU Tigers. Burrow alone is 0-3 against the Browns in his brief but stellar NFL career, most recently losing at home in a Week 9 blowout during the 2021 regular season, 41-16. Cleveland swept the Bengals by once again taking them down during Week 18 of last year, however Burrow did not play out of caution for the playoffs.

Fast forward to tonight’s game, and things aren’t going to get any easier for Burrow and company without his leading receiving and top playmaker in Ja’Marr Chase. Since making his NFL debut last season, Chase hasn’t missed a single game for the Bengals but will now be sidelined for 4-6 weeks due to a recent hip injury. The pressure will surely be on Burrow tonight under the lights, as the gunslinger holds a record of just 2-7-1 in 10 NFL starts prior to Chase’s debut.

Tonight’s Monday Night Football matchup is looking like a must-win for HC Kevin Stefanski and his Cleveland Browns (2-5, 3-4 ATS), who limp into this game currently on a four-game losing streak. Cleveland has lost four games this season by three points or less, meaning the team’s 2-5 record doesn’t really tell the whole story of their capability. They have the run game, they have the defense, and now it’s time to translate both of those into some wins.

The Browns will once again be without top CB Denzel Ward tonight, who has missed each of the last two games with a concussion. In Ward’s absense, Cleveland did a phenomenal job of limiting Lamar Jackson (9 completions for 120 passing yards) in last week’s 23-20 loss to the Baltimore Ravens, and should get a major boost following the news of Ja’Marr Chase’s hip injury for Cincinnati. G Wyatt Teller will miss his second consecutive game for the Browns after suffering a calf injury during the team’s Week 6 blowout loss to the New England Patriots, while TE David Njoku will miss his first game of the year with an ankle injury.

Despite a few missing pieces on offense and Ward out on defense, expect a herculean effort from the Browns tonight as they look to keep their season alive and advance to 3-5 overall. Cleveland will finally have a fully healthy Myles Garrett and Jadeveon Clowney combo on the defensive line, as neither player appeared on the team’s injury report for the first time since mid-September. Getting those two back into the mix against a Bengals offensive line that has surrendered the 2nd-most sacks in the NFL (25) is a recipe for success, and should play a major factor as they look to win their fifth-straight game over the division rival Bengals.

Claim a $1K risk-free bet on any market at BetMGM

There are plenty of events on tap this Halloween, and new users at BetMGM can choose between any of them to take advantage of that $1,000 risk-free first bet. Just make sure you click this link and register using the BetMGM bonus code HANDLETOP. From there, place your first bet up to $1K on the event of your choice, including World Series Game 3, NBA, or NHL action!