Despite being ranked fourth in the country, undefeated Horned Frogs are underdogs in Austin 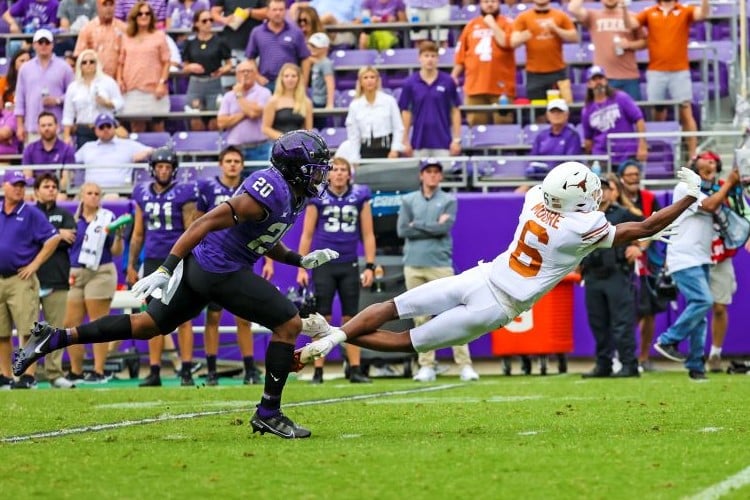 Following second-half comebacks in three of their last four wins, the undefeated Texas Christian University Horned Frogs moved to 9-0 for the first time since 2010. A victory against Texas Tech on November 5th propelled TCU three spots in this week’s CFP rankings to No. 4 in the nation. With three more wins and a victory in next month’s Big 12 Championship, TCU could secure a trip to the CFP national semifinals for the first time in school history.

On Saturday, however, TCU will arguably confront its toughest test of the season: a prime-time showdown in Austin against No. 18 Texas. For the clash between the two Big 12 programs, college football bettors can capitalize on a new-user welcome bonus at BetMGM Sportsbook.

For the moment, all new players who register with BetMGM Sportsbook using the bonus code HANDLETOP can place their first bet up to $1,000 risk-free. If you happen to lose your first wager, BetMGM has an offering to help take the sting away. We’ll provide all of the necessary details down below.

Bijan Robinson and Texas remain steady 7-point favorites at BetMGM as of Friday morning. Robinson, the Horns’ punishing running back, leads the Big 12 in rushing with 1,129 yards. TCU counters with Kendre Miller, who ranks second with 1,009. The two are the only backs in the conference to top the 1,000-yard mark.

To qualify for this extra special welcome bonus, you’ll need to be over the age of 21 and presently located in one of the many BetMGM Sportsbook states at the time of wagering. Those states include AZ, CO, IA, IN, IL, KS, LA, MI, MS, NJ, NY, PA, TN, VA, WV, and WY.

If you meet the requirements listed above, you’ll want to click this link and begin the account creation process. Be sure to enter the BetMGM bonus code HANDLETOP when prompted.

Bijan Robinson- the best running back in college football. pic.twitter.com/pQP8RNPRaL

Place your first bet with BetMGM

Once your account is up and running, you’ll want to deposit some funds to use on that initial risk-free bet. Upload at least $10 or more and head over to the sportsbook menu once complete.

From here, place a bet on any prop, market, event, or bet type offered at BetMGM. You can wager on any Top 25 matchup on this week’s college slate, or opt to spend your cash on something different — the decision is entirely up to you. This promotion will work with any event on the site.

If the bet wins, congratulations! You can do with your winnings as you please. But let’s say, hypothetically, that your first bet doesn’t go as planned. What happens next?

When losing a risk-free wager, all eligible players will receive a refund in the form of free bet credits within a period of 24 hours. Players can earn up to $1,000 in free bets, meaning any amount lost over $1K won’t be covered by the site.

If your initial wager was worth more than $50, you can expect to take home five separate free bets. Each of the five free bets will be equal to 20% of the stake you lost.

All BetMGM free bets expire after a period of one week. There are no exceptions. Act swiftly to make use of the promo. All winnings from a free bet are yours to keep. You can withdraw them instantly if you would like.

Despite a spectacular season, TCU quarterback Max Duggan is still a longshot to win the Heisman Trophy. Duggan leads the Big 12 with 24 passing touchdowns, with another four on the ground.

The nimble quarterback enters the week with sports betting odds of 40/1 at BetMGM to capture the Heisman. There are eight players with lower odds, led by Ohio State quarterback C.J. Stroud (+175). Relatively unknown on the national stage before this season, Duggan opened the summer off the board in the futures market.

Duggan’s rise underscores the ascent of the upstart Horned Frogs. Former TCU coach Gary Patterson resigned on Halloween of last year following a 3-5 start. Patterson, who spent 20 years at the helm, led TCU to a 13-0 mark in 2010, when the Horned Frogs ended the season ranked second in the nation. Now an assistant coach at Texas, Patterson has helped devise a a game plan for containing Duggan.

What Patterson means to the Texas program in his special assistant role, via @josephcook89 (FREE) #HookEm

On the other side of the ball, TCU will need to slow Robinson, a contender for the Doak Walker Award, given each year to the nation’s top running back. The Longhorns could use a steady dose of Robinson on Saturday night to keep the ball away from Duggan. Oddsmakers, though, expect a shootout, with the total of 66 points among the highest of the weekend.

If Texas prevails on Saturday, there is a chance the teams could meet again in the Big 12 championship game. At 4-2, Texas is in a three-way tie with Kansas State and Baylor for second in the conference. TCU has odds of +140 at BetMGM to win the conference, just ahead of Texas, which has odds of +175. Baylor is next at +450, followed by Kansas State and Oklahoma State at +850 and +6000, respectively.

Texas has a 64-27-1 record against TCU in series history, with the Longhorns winning 24 straight meetings from 1968 through 1991. But since losing Texas in 2013, TCU has captured six of the last eight games.