Belmont Preview: War Of Will Looks To Build On Preakness Triumph

War Of Will, Tacitus represent class of the field in final leg of Triple Crown 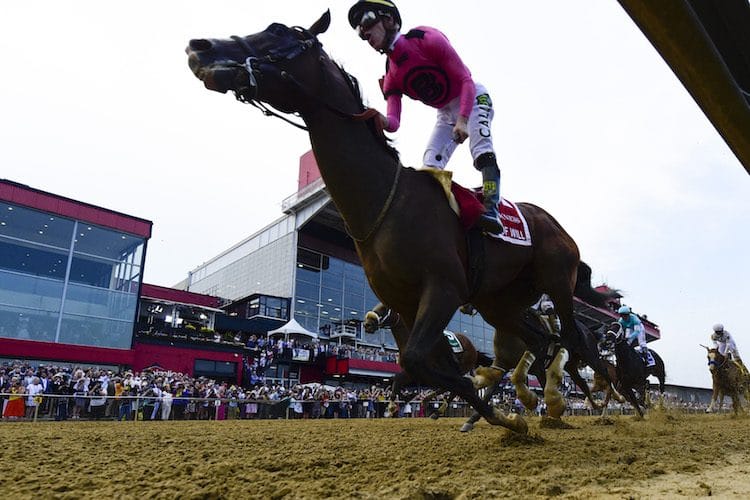 With a victory in the Grade I Belmont Stakes, Casse will join a select group of trainers that have recorded multiple Triple Crown race wins in the same calendar year. Over the last three decades, 14 horses have won two legs of the Triple Crown without capturing all three. Only four, however, have won the Preakness and the Belmont after failing to enter the winner’s circle at Churchill Downs in the Kentucky Derby.

The designation goes to Tacitus, the third-place finisher at the Kentucky Derby after stewards moved Maximum Security from first to 17th, disqualified for an infraction. Tacitus, the 9/5 favorite, could become the fourth son of Tapit to win the Belmont in the last sixth years. Two others entered in the field of 10, Bourbon War and Intrepid Heart, are also Tapit sires.

On a sloppy track at Churchill, Tacitus jockey Jose Ortiz fought through heavy traffic down the stretch to close with a respectable finish. Tacitus, the winner of the Wood Memorial and Tampa Bay Derby, could also benefit from the additional quarter mile in the 1 1/2 mile Belmont Stakes.

“He kind of ran evenly, he was way far back then he closed,” said Johnny Avello, director of sportsbook operations for DraftKings Sportsbook. “It was a terrible racing surface that day so it was hard to make up a lot of ground. He deserves favoritism, but I don’t know about 9/5.”

On the morning line, only three horses in the race opened with single-digit odds. Japanese-bred Master Fencer, closed like a freight train in the Derby, finishing the final quarter in 24.60 seconds — a closing time that clocked half a second faster than any other horse in the field. Ridden by Julien Leparoux, Master Fencer is 8/1 on the morning line.

Still, oddsmakers largely believe it will be a two-horse race between War of Will and Tacitus. The two have combined for seven career victories and more than $2.4 million in lifetime earnings. Among the rest of the field, only Preakness runner-up Everfast boast career earnings above $400,000.

War of Will, the 2/1 second-choice, enjoyed a clear trip along the rail in the rail in the Preakness when jockey Tyler Gaffalione guided him past a tiring Warrior’s Charge at the top of the stretch. Casse also credited Gaffalione’s ability to get his horse to rate or relax over the first half of the race when Warrior’s Charge led the field through fast, early fractions. On the long backstretch at Belmont Park, it will be imperative for War of Will to rate again behind the leaders.

“He did rate very well in the Preakness but it was an extremely fast pace,” Casse said. “So, I think a lot of it is going to depend on just how much Tyler can get him to relax.”

Impeded by Maximum Security in the Derby during a contentious stretch run, War of Will finished seventh by 4 1/2 lengths.

“Would he be going for the Triple Crown if he wasn’t bumped during the Derby? I don’t think so,” Avello said.

Tacitus, meanwhile, is one of four horses from the Derby that skipped the Preakness but will return for the Belmont. Master Fencer (6th in the Derby), Tax (14th) and Spinoff (18th) also took part in the Run For The Roses. War of Will is the only three-year old in this year’s crop to enter in all three legs of the Triple Crown.

“Sometimes when you’re running, you’re in better shape than when you’re off for a long layoff,” Avello said. “We’ll have to wait and see. I don’t know if there’s an advantage there.”

During the extended layoff, Tacitus has remained fresh with several workouts at Belmont Park. Trainer Bill Mott liked the rhythm of Tacitus’ workout on May 26 when he breezed five furlongs in 1:00.16. Mott, the trainer of Kentucky Derby winner Country House, is also seeking his second Triple Crown victory of the season.

With Country House still recovering from a mild illness, Mott has turned his attention to Tacitus.

“Bill is a great trainer and you know, we’re going to his house to play now,” Casse said. “He’s got a homefield advantage.  The horse shows up every time, runs hard, and I’m sure Bill will have him ready.”

Hall of Fame trainer D. Wayne Lukas is the last trainer to win multiple Triple Crown races with different horses in the same year. Lukas accomplished the feat in 1995 with Thunder Gulch and Timber Country.

During the first two legs of the Triple Crown, several longshots have hit the board producing extravagant payouts in both the trifecta and superfecta pools.

If you are bold enough to leave Tacitus or War of Will out of your exotic picks, another large payday could await. The Belmont has seen its fair share of upsets over the prior two decades. When Sarava triumphed in 2002 at odds of 70/1, the $2 trifecta paid more than $25,000. Two years later, Birdstone spoiled Smarty Jones’ Triple Crown bid with a late rally. A $1 Superfecta paid $11,579. Bettors also cashed in on exotics in the 2008 Belmont when Da’Tara captured the race at odds of 38-1.

Big Brown, the heavy 1-4 favorite, was eased by jockey Kent Desormeaux and faded to last. Others such as War Emblem, Funny Cide and California Chrome have not fired on Belmont Day at a short price.

As you complete your handicapping, some longshots may be worth a second look. Sir Winston (12/1) is also trained by Casse and has experience on the track after finishing a fast-closing second in last month’s Grade 3 Peter Pan. Both Everfast and Intrepid Heart employ a late-running style and can close out your trifecta with a third-place finish.

Also keep an eye on Tax, the runner-up to Tacitus in the Wood. With a lack of early speed, Tax (15/1) could be forwardly placed by jockey Irad Ortiz Jr. A year-long handicapping contest at America’s Best Racing, dubbed the Big Race Showdown, pits some of the nation’s top racing analysts. Four of the eight handicappers entered in the Showdown predict that Tax will finish in the Top 3 on Saturday.

On the undercard, the $1.2 million Runhappy Metropolitan Handicap has the potential to be the Race of the Year. Six horses in the field, including 5/2 favorite McKinzie, own Grade I victories amounting to more than $25 million in winnings.

In total, there are eight Grade I races at Belmont Park on Saturday’s 13-race card.