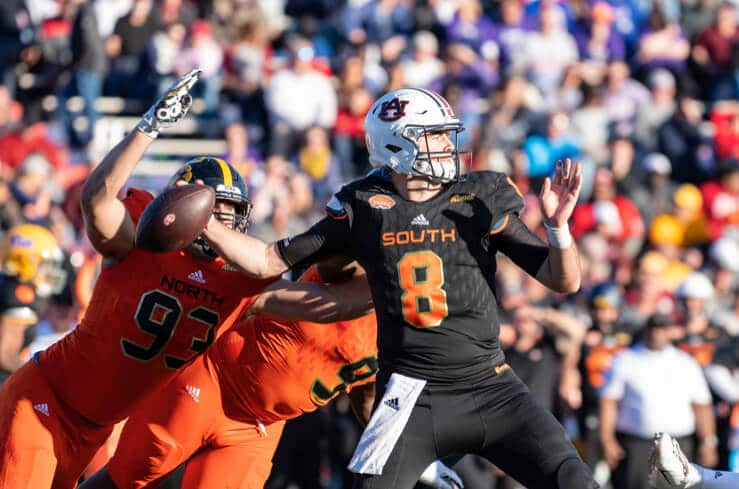 Unlike last spring when the temptation of snagging a franchise quarterback enticed a host of offense-starved teams at the NFL Draft, Thursday’s opening round in Nashville is expected to take on an entirely different complexion.

A historic run on defensive ends in the first round of the league’s annual draft could affect numerous prop bets, namely one that traditionally favors the offensive side of the ball. As many as 14 defensive linemen may be selected over the draft’s first 32 picks, a mark that would set a record for the most first-round players taken at the position ever.

If the talented rushers fall off the board early, sports betting enthusiasts who spotted the trend in their prop wagering selections could breathe a little easier.

At BetAmerica Sportsbook in New Jersey, there is strong consensus that Bosa will be taken in the first two picks. A prop on Bosa’s draft position of Under 2.5 hovered around -315 as the draft approached, while the over stayed around +200. If Williams is taken one spot later, bettors will hit the Under of 3.5 (-115).

Bosa could be joined in the first round by edge rushers Brian Burns (Florida State), Montez Sweat (Mississippi State), Rashan Gary (Michigan), and Clelin Ferrell (Clemson) — each of whom are projected in the top 20 in various mock drafts. Two other defensive linemen, Clemson DT Christian Wilkins and Mississippi State DT Jeffery Simmons, are projected to be mid-to-late first round selections.

Oliver, the 2017 Outland Trophy winner, appears to be rapidly shooting up draft boards. William Hill US has received considerable one-way action on Oliver draft position props, prompting Director of Trading Nick Bogdanovich to lower the total by one to 7.5.

“A year ago he was a one or two (overall), then he fell way, way down,” Bogdanovich told Sports Handle. “Now, he’s making a miraculous comeback.”

Before setting the props, Bogdanovich said he read through about 10 mock drafts and several draft magazines during his research. He anticipates that defense will rule the evening. The record for most defensive players taken in the first round occurred in 2006 when 19 were selected. If the total hits 18 on Thursday, bettors will cash in on a head-to-head prop that pits defensive players drafted on Day 1 versus players on the offensive side (+2.5).

Movement near the bottom of the round figures to affect a multitude of props on Thursday evening. A handful of other defensive linemen — Clemson DL Dexter Lawrence, Ohio State DT Dre’Mont Jones, and Notre Dame DT Jerry Tillery — could sneak into the first round. Jeremiah projected Lawrence to the Patriots at No. 32 in his Mock Draft 3.0, but Lawrence slipped out of Round 1 in his latest incarnation.

Bogdanovich set the total for combined Big 10 and ACC players selected in the first round at 10.5. While he expects at least six Big 10 players be taken on Thursday, he is less certain about the ACC. Enough bettors at William Hill think that the combined total will hit at least 11 that Bogdanovich added juice to the over.

Chuck Esposito, sportsbook director at Sunset Station in Henderson, Nev., is intrigued by a scenario that could materialize before the draft even begins. If the Cardinals opt to take former Oklahoma QB Kyler Murray with the top overall pick, the bidding war for Arizona’s current QB Josh Rosen could begin Thursday afternoon. As of Wednesday night, Murray was an overwhelming 1/8 favorite at Station Casinos to be taken at No. 1. Bosa and Williams were next at 4/1 and 10/1, respectively.

Station, which operates more than a dozen sportsbooks and sportsbook outlets throughout Las Vegas, has set the total for quarterbacks selected in the first round at 3.5. A bevy of teams, including the Giants, Redskins, Raiders, Bengals, Dolphins, Broncos, Patriots, and possibly even the Titans, could be in pursuit of a quarterback on Thursday night. If one of those teams lands Rosen via trade, there will be one less suitor for a prospect such as Daniel Jones and Will Grier. Stay tuned.

On the eve of the #NFLDraft 1st Round, hear what @BaldyNFL has to say on how many QBs will end up going on Day 1!

Either way, Ohio State QB Dwayne Haskins appears to be a surefire first-round pick. With the Giants holding the No. 6 spot, Bogdanovich set the total on a Haskins draft position prop at 6.5. William Hill received a good amount of one-way action on the over during the week before a rumor surfaced Wednesday that the Redskins could move up to No. 5 if Haskins is still available.

Make no mistake of it, the Washington Redskins are in the market for a QB. Sources have indicated Dwayne Haskins is their target despite multiple holes at several positions on this roster. I’m also told the Redskins Draft board is set.

This year marks the third consecutive spring that Las Vegas sportsbooks are offering NFL Draft props after the Nevada Gaming Control Board approved a request in April 2017. The request allowed operators to take action on prop wagering for the first time. Station Casinos established a limit of $2,000 per prop, while William Hill limits all prop bets to $500 each.

William Hill offered more than 30 props for the 2018 Draft but cut the total by roughly two-thirds this year due in part to its continued nationwide expansion. A busy period with the NCAA tournament and The Masters, coupled with meetings on the East Coast, left Bogdanovich with a full plate.

Bogdanovich is already looking forward to 2020 when the draft will be held in his hometown of Las Vegas.

“I will guarantee next year, if I’m alive, I will have at least 50,” Bogdanovich joked.