Improbable, War Of Will top wide open field in Baltimore 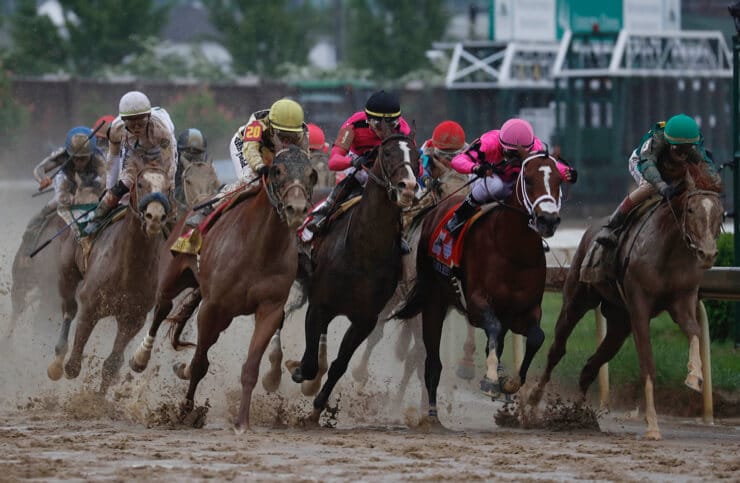 But with both horses out of Saturday’s Preakness Stakes, the 144th renewal of the Preakness at Pimlico Race Course has lost a considerable amount of luster. For the first time since 1996, when Grindstone missed the Preakness with a knee injury, the race will be without the reigning Derby winner. A field of 13, the largest at the Preakness in eight years, is highlighted by Improbable and War Of Will, two of the top horses in this year’s crop of 3-year-olds.

From a bettor’s perspective, the race will be replete with opportunities for large payouts. Of the 13 horses entered, only four — Improbable, War Of Will, Bodexpress, and Win Win Win — took part in the Derby. Among the remaining nine, only Anothertwistafate (6/1) and Alwaysmining (8/1) have morning line odds below 10/1. Improbable, a close runner-up to Omaha Beach at last month’s Arkansas Derby, has been installed as the 5/2 favorite.

Bettors in search of a massive payday should read the fine print at their local book. An ophthalmologist in Reno hit exacta and trifecta wagers on Derby Day, two bets that could have paid out a combined $600,000. The wagers came with a caveat: William Hill caps exacta bets at 150/1 and Trifectas at 500/1. As a result, the doctor received a payout of approximately $35,000.

As with the Derby, the Preakness is expected to be devoid of front-end speed. With few horses eager to sprint to the front of the pack, Warrior’s Charge could enjoy an uncontested lead. Trained by Brad Cox, the son of Munnings is coming off a six-length win April 13 at Oaklawn Park. Warrior’s Charge will need to stretch out for the 1 3/16-mile Preakness, slighter farther than the distance ran in each of his last two starts.

The two top choices, Improbable and War of Will, both may stalk the pace from the No. 1 and No. 4 positions, respectively. War of Will had his path impeded by Maximum Security in the Derby on the far turn and eventually faded to seventh. Breaking from the No. 1 gate, jockey Tyler Gaffalione could enjoy a ground-saving trip along the rail.

A host of closers will hope that the favorites press Warrior’s Charge on the Pimlico backstretch. Four Triple Crown newcomers, Bourbon War, Signalman, Laughing Fox, and Everfast, prefer to hang back and close into a quick pace. Bourbon War finished fourth behind Maximum Security in the Florida Derby, his last start. Win Win Win, who placed ninth in the Kentucky Derby, is another closer to watch.

Maryland-bred Alwaysmining will likely have the crowd on his side in Baltimore. In his last start, Alwaysmining cruised to an 11½-length victory in the Federico Tesio at Laurel Park. Piloted by jockey Daniel Centeno, Alwaysmining has won in seven of 12 career starts, including his last five stakes races at Laurel.

Alwaysmining could produce a historic afternoon for his connections. With a win by the Dark Bay son of Stay Thirsty on Saturday, Kelly Rubley will become the first female trainer to win a race in Triple Crown history. More than 30 years have passed since a Maryland-bred horse won the Preakness, the last coming in 1983 when Deputed Testamony captured the race.

If Alwaysmining wins the Preakness, Kelly Rubley would be the first female trainer to win a Triple Crown race.https://t.co/wQKcHMeiUC

Favorites have done exceedingly well at the Preakness over the last decade. Two horses in the last four years, Justify and American Pharoah, have triumphed in the race on their way to the Triple Crown. Other favorites such as California Chrome, Rachel Alexandra, Big Brown, and Curlin have also left Pimlico with a victory.

Neither Maximum Security nor Country House is running in the Preakness Stakes, which means there's a new betting favorite https://t.co/qezBRAdS66

Consider safe choices in Improbable and War Of Will up top in any trifecta or superfecta bets. You can also sprinkle in a number of longshots underneath in Signalman (30/1), Bodexpress (20/1), and Laughing Fox (20/1). While it will be hard to top the trifecta payout from the Derby, a surprise showing from one of the three could lead to a nice payday on Saturday.