On Eve Of ‘21 NFL Kickoff, The 21 Biggest US Sports Betting Developments Of Past Year

A barrage of developments in legalization, regulation, business, and beyond 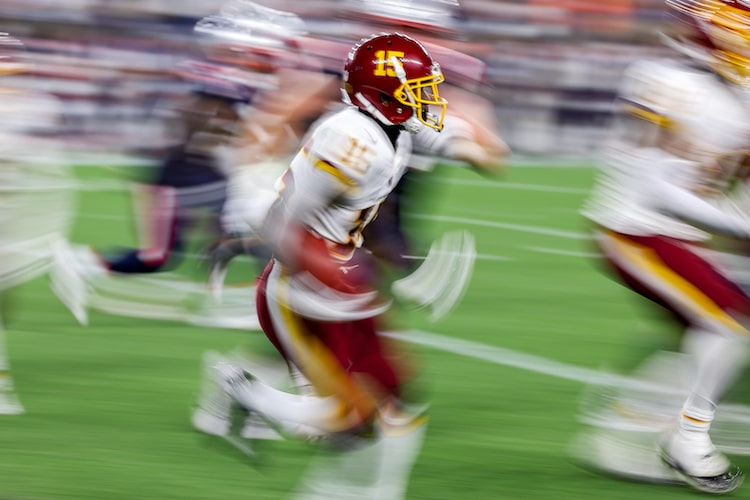 The biggest U.S. sports betting story of 2020 up until the relatively smooth-running 2020 NFL season (with apologies to Denver Broncos quarterbacks and Pittsburgh Steelers nation) was how the industry would withstand the challenge of operating sportsbooks in a climate with … no sports. Or only a smattering of table tennis contests, a celebrity golf challenge, UFC events on an island in United Arab Emirates, and mass heaps of uncertainty and creative crisis management.

Because my life operates based on a calendar that begins each year with the NFL kickoff, it’s now time to reflect on the 100th NFL season, from September 2020 to September 2021. In no particular order, here are the 21 most significant, impactful sports betting industry developments over that span while awaiting the Dallas Cowboys’ Sept. 9 visit to the Tampa Bay Bucs (-7.5) to open the regular season.

1. Caesars ditches William Hill name (August 2021) — Caesars Entertainment, formerly known as Eldorado Resorts, revealed in May that within the U.S. it would retire the name of the U.K.-based William Hill, which it agreed to purchase in September 2020 for $3.7 billion. Three months later, poof! The Emperor has arrived for a full-throated national rebrand with Caesars Sportsbook and a focus on its rewards program. The confusing jumble of “Caesars Sportsbook by William Hill” is no more, and shuffling continued this week as longtime William Hill bookmaker Nick Bogdanovich was relieved of his duties as Caesars wanted to go “in a different direction.”

2. Fanatics enters the chat (July 2021) — Fanatics Betting and Gaming, helmed by former FanDuel CEO Matt King, has arrived in name but … we’ll see about the actual product and how well an overflowing database of jersey and Fathead purchasers converts for sports betting. The group is looking to start big after teaming up on a bid with Kambi and Penn Sports Interactive to operate in New York, plus it’s joined the coalition of commercial groups that this week announced a ballot initiative to bring some kind of online sportsbook market to California.

3. Arizona legalizes and systems are go (April 2021) — Authorization was thought to be possible rather than probable, but the legislature indeed found enough support from various key officials and stakeholders including Gov. Doug Ducey, the tribes, and professional sports teams to get it done. They’re off and running before an official Sept. 9 shotgun launch, but not without lawsuits, finger-pointing, and controversy. And there is emergency hearing Monday that could potentially sideline the whole thing.

4. In Florida, a special session helps deliver Seminoles an online betting monopoly (May 2021) — Similar but different tribal-state and IGRA issues were at play in the nation’s third-most populous (and possibly weirdest state), after Gov. Ron DeSantis helped broker a new 30-year compact with the powerful Seminole Tribe that would allow online, statewide sports betting controlled by the tribe. While the Department of the Interior approved the compact (through inaction), multiple lawsuits are underway to block things from proceeding as the Seminoles prepare to launch retail sportsbooks in October. DraftKings and FanDuel, meanwhile, are bankrolling a ballot referendum for 2022 to usher in commercial operations.

5. California’s got referendum action, too (September 2021) — As of this week, there are now three proposed ballot initiatives underway that would deliver online sports betting and/or physical sportsbook betting to the Golden State. The latest comes from a coalition of seven sportsbooks, including BetMGM, DraftKings, and FanDuel, with a $100 million war chest to support a 2022 ballot measure that actually, in the interest of consensus building, would require tethering with Native American casinos.

6. Online sports betting is en route to New York via budget process (April 2021) — I’m not sure anyone believed New York would actually “happen” until it did, which it did as former and disgraced Gov. Andrew Cuomo got his wish for the institution of a narrow market with a high revenue-sharing percentage for the state. The closely watched RFP and bid process is well underway, and we should find out in the coming weeks which sportsbooks will gain entry — at a steep cost of at least 50% revenue-sharing with the state.

7. NFL makes its gambling embrace officially official (April and September 2021) — The Shield designated Caesars, DraftKings, and FanDuel official sports betting partners with the league in deals worth a reported $1 billion over five years. And you probably saw that just this week, the NFL made it a full touchdown and extra point by adding BetMGM, FOX Bet, PointsBet, and WynnBET to the “official” sportsbook roster. Meanwhile, Hall of Fame Coach Tony Dungy is struggling to wrap his mind around the NFL’s longstanding marriage of convenience and money-making with sports gambling.

I really don’t like seeing this Adam. When I came into the league the NFL had a stance against gambling. Now it seems like we’ve accepted it. I realize it’s legal now but we’ve all seen the damage gambling can do to lives. I don’t think we should be promoting it. https://t.co/8wUY1M8Ff5

8. ESPN looks to strike while the feeding frenzy continues (August 2021) — Last season’s NFL kickoff saw the Worldwide Leader bring on sportsbook partners in Caesars and DraftKings for odds and link integrations. Now the Disney-owned sports juggernaut is looking to plunge deeper by licensing its letters for a sportsbook for … $3 billion, the Wall Street Journal reported last week. Whether it gets it in cash or equity or even a third of that amount in any form remains to be seen.

The Worldwide Leader In Sports Betting? If @espn can license a sportsbook brand it may prove that the U.S. sports betting mkt has reached mainstream acceptance accd to @roundhill's Will Hershey. With comments from @LloydDanzig and tweets from @AdamSchefter https://t.co/YiWwnEaH66

9. Genius Sports wins exclusive, official data deal with NFL (April 2021)– Genius outbid the incumbent Sportradar — or framed another way, Sportradar walked away from the NFL’s outsized demands. The U.K.-based Genius Sports now must dramatically increase the value of those rights and sign up as many sportsbooks as possible, a process that is underway.

10. DraftKings becomes subject of investigation in proxy betting scandal (November 2020) — In a story broken by our Matt Rybaltowski, a bettor based in Florida says he placed a highly publicized $3 million parlay wager via online proxy in New Jersey, then allegedly found his account frozen. It is possible the matter has settled privately, but the New Jersey Division of Gaming Enforcement’s scrutiny of the alleged messenger betting activities is apparently still ongoing.

11. Tennessee sportsbook’s license is suspended due to alleged widespread financial crimes on its platform (March 2021) — The floundering sportsbook TN Action 24/7, whose president is also CEO for the “flex” loan outfit Advance Financial that charges exorbitant rates to mostly distressed borrowers, became the first sportsbook post-PASPA to have its licensed suspended … only to win a legal injunction and reinstatement because the since-deposed regulatory authority (the Tennessee Education Lottery Corporation) violated its own rules in issuing the violation during a hastily called meeting. Total but semi-predictable train wreck.

12. Michigan and Virginia legal sportsbooks debut on same day (January 2021) — On Friday, Jan. 21, just in time for the NFL’s Divisional Round games, Michigan saw the shotgun launch of 10 online sportsbooks, while FanDuel went off in Virginia with a short head start on a few others. Virginia needed only five months for its licensees to register in excess of $1 billion in total wagers, fastest yet in the post-PASPA era.

14. New Jersey passes Nevada in post-PASPA handle (May 2021) — The inevitable became official in late May when Nevada was overtaken by New Jersey for the No. 1 spot in total sports betting handle in the post-PASPA era. With April ‘21 numbers in the books, the Garden State had cleared $15 billion handle while Nevada was about $80 million shy; now, New Jersey’s “lead” will only continue to grow.

15. Bally’s pandemic spending spree nets Sinclair stations — Bally’s media deal with Sinclair Broadcast Group for a reported $85 million over 10 years resulted in the rebranding of 21 FOX Sports regional sports networks as Bally’s Sports — basically a platform to advertise Bally Bet, which launched in the U.S. in May 2021 in Colorado.

16. Ink-stained wretches join the party (May and July 2021) — Gannett, owner of USA Today, hooked up in July with the Malta-based Tipico Sportsbook to supply odds across its vast network of digital publications and print newspapers landing on a hotel doorstep near you; meanwhile, the Associated Press in May partnered with FanDuel for the same across the AP game previews, scores, and stories where sports betting odds are referenced.

"At worst, I don't think this was more than 15 points off. That's as bad as I think it could be. I didn't think it would be the worst number ever."https://t.co/WGx8ByvjEH

18. Canada legalizes single-game sports wagering (June 2021) — It’s not quite the U.S. but qualifies as North America, and enthusiasm for sports betting triumphed over cynicism as lawmakers finally got the deal done. The provinces wasted no time launching sportsbook platforms via existing lottery infrastructures in late August. Regulations are expected to follow that will usher in some commercial sportsbook licensure.

19. NHL’s Evander Kane gets in gambling hot water (August 2021)—  The investigation is still young into his estranged wife’s allegations (made on social media) that he gambled on his own games, but some of the initial details are troubling. The 13-year NHL veteran declared bankruptcy earlier this year and noted in a filing that he lost over $1.5 million, in part, “via bookie.” Kane has completely denied his wife’s allegations, writing in part that he has “NEVER gambled/bet on Hockey, NEVER gambled/bet on a Sharks game, NEVER gambled/bet on any of my games and NEVER thrown a hockey game.”

20. First in-stadium sportsbook opens at Capital One Arena in Washington D.C. (May 2021) — A long time in the making and a year after the sportsbook ticket windows opened while the pandemic was in its earlier stages, the full-fledged sportsbook is now open for business in the venue the Washington Wizards and Washington Capitals call home. More such locations will join the ranks across the country, including a Caesars Sportsbook at the Diamondbacks’ Chase Field,a DraftKings Sportsbook at Wrigley Field (!!!), a FanDuel Sportsbook at the Suns arena, and a BetMGM Sportsbook at the State Farm Stadium.

The full sportsbook opens at Capital One arena today. The press is getting a look inside now, but a few quick snaps of the new @WilliamHillDC space. https://t.co/sDIqxXfxzu pic.twitter.com/cC160iqSsp

21. DraftKings spends big on media properties (March and April 2021) — Sports gambling’s feast on traditional sports media continued as DraftKings shelled out a semi-shocking $50 million on former ESPN talent Dan Le Batard’s podcast. Earlier in the year it spent an undisclosed sum for the Brent Musburger-led Vegas Sports and Information Network (VSiN). At least this much is true: It’s a good time to own a sports media property with some semi-provable metrics about an audience that likes to gamble.