New York mobile! Tri-exclusive deals! A mid-year analysis, from the biggest news to the top controversies and more

by Eric Raskin
in Analysis 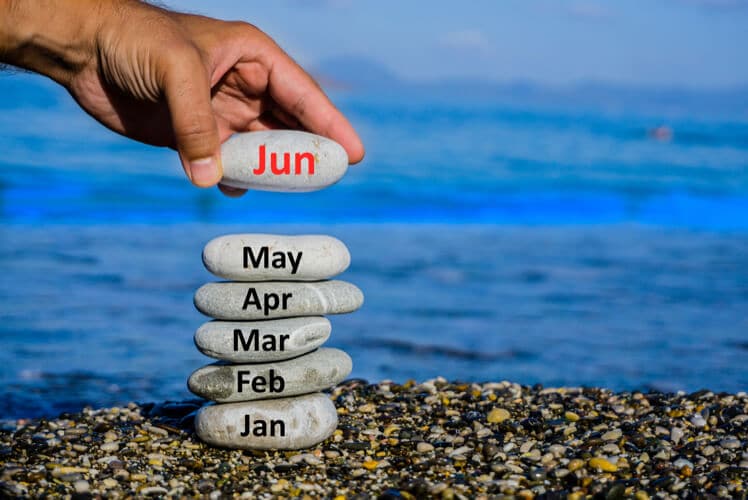 As the calendar turns from June to July, and as America largely turns the page on a pandemic that temporarily shut down sports and closed casinos — to say nothing of its more devastating impacts — Sports Handle celebrates six months of a gradual return to normalcy with some mid-year awards for the sports gambling world.

This is a look back at the best, the worst, and the weirdest of what has thus far been a record-smashing sports betting year.

But those records won’t last long, so let’s skip right past Ricky Gervais’ roast of the celebrities in attendance and get straight to the awards …

Biggest State Legislative News of the Half Year

There’s no suspense as we open our first envelope. New York state legalizing mobile sports betting, with expectations that the first bets on phones and computers will be taken by the 2022 Super Bowl, is certain to recalibrate the regulated betting world. The Empire State is the first of the “Big Four” (California, Texas, and Florida being the other three) to legalize mobile betting, and with its population in excess of 20 million people, it will surely pass New Jersey quickly to become America’s top sports betting state, at least in terms of betting handle. (And it will directly siphon major betting dollars away from the Jerz when New Yorkers no longer have to bridge or tunnel their way across state lines to get a bet down.)

Optimism is not especially high that New York is shaping its market correctly and maximizing the size of the market or the customer experience, but even a sub-optimal arrangement with a limited number of mobile books is a game changer. Considering where New York stood on online betting at the end of 2020 — seemingly on a hamster wheel to nowhere — Gov. Andrew Cuomo’s about-face ushered in the biggest U.S. sports betting news cycle of the year so far.

Bronze medal: Connecticut and its tribes reach a deal for mobile gambling.

New York wasn’t the only “Big Four” state advancing sports betting legislation in the first half of the year. Florida, an even more populous state, got in on the fun too! Except it sets up to be a near-monopoly for the Seminole tribe. And most legal experts expect the mobile aspect to be undone. Meaning all that Floridians will have is retail sportsbooks at Seminole properties, while DraftKings and FanDuel push for a ballot measure for a more competitive mobile market.

Sports betting is coming to Florida, but how and when are questions that were by no means resolved during the first half of 2021.

Out With a Whimper Award

This is only tangentially a sports betting issue — it’s more of an all-around online gambling concern — but the threat posed by changing interpretations of the Wire Act of 1961 has been erased, at least for now.

Widely believed to be at the behest of casino mogul and Republican mega-donor Sheldon Adelson, the Trump Department of Justice tried in 2018 to reverse the Obama-era opinion that opened the door for regulated online poker and casino games. But the New Hampshire Lottery fought back in 2019 and won, and two major January events — a change of presidential power and the death of Adelson — signaled the end of the fight. The Biden DOJ let the NH Lottery ruling go quietly, without a challenge, and like that, the Wire Act issue was kaput.

Runner-up: The 2½-year legal battle between New Jersey horsemen and the major sports leagues over $150 million theoretical sports betting dollars owed was suddenly “amicably resolved.” Really? Just like that? This was like if Reservoir Dogs ended with no guns drawn and everyone shaking hands and going their separate ways.

This honor goes to the NFL’s simultaneously announced deals with Caesars, DraftKings, and FanDuel as official partners of the league. This served as an exclamation point to the NFL’s full-throated reversal of its longstanding position that gambling was a scourge that would destroy the sport. It also served to introduce the word “tri-exclusive” into the vernacular — only to be immediately scrubbed from our collective vocabulary because it is very much not a word.

Sportsbook Controversy of the Half Year

A regulated environment means that there are rules, and there are consequences if those rules are breached. It took until March of 2021, but for the first time in the post-PASPA era, a sportsbook had its license suspended — albeit temporarily — when local Tennessee operator TN Action 24/7 got shut down for alleged financial crimes on the platform.

Terms such as “credit card fraud” and “money laundering” were bandied about, although the suspension lasted only about a week — ironically, one “24/7” period. The online sportsbook was ultimately deemed by the Tennessee Education Lottery to be in “good standing.” However, a possible federal investigation looms concerning the underlying, potentially criminal activity occurring on the platform.

March 2021 goes into the history books as generating more handle than any other month ever, a record that should last … until the next football season begins.

Still, with more than $4.6 billion wagered nationally — it doesn’t seem so long ago that the industry was waiting for its first $2 billion month — March established a fairly jaw-dropping score to beat. Both Michigan and Virginia launched mobile sports betting in late January, opening up subsequent months to a larger bucket of potential sports gamblers than ever before, and the peak came in the month famous for hosting the NCAA men’s basketball tournament.

You want to bet on Illinois-based college teams while in the state of Illinois? According to a newly proposed law, that option is coming. But only at retail sportsbooks, not online. And only on Tuesdays, when the temperature is below 72 degrees, and it’s a crescent moon.

OK, those last few stipulations aren’t real. But being prohibited from betting on certain college games online and forced to drive to a brick-and-mortar sportsbook to make those wagers? That is a real idea that someone had, and it appears it will be implemented.

Sports Betting Media Deal of the Half Year, Controversial Division

The Associated Press — yes, the venerable, respected, 175-year-old Associated Press — has found itself a sportsbook partner. In a deal announced in May, the AP welcomed FanDuel Sportsbook as its official odds provider. Which means whenever betting lines appear in an AP story, they will come from one sportsbook, even if the consensus line happens to be something different. It’s great exposure for FanDuel. It’s a little bit icky for a purportedly unbiased news outlet.

Runner-up: DraftKings bought VSiN in March, which our own Jeff Edelstein referred to as “a ‘wolf investing in hen houses’ type of move.”

Sports Betting Media Deal of the Half Year, Non-Controversial Division

This one goes to Sports Handle’s parent company, Denmark-based Better Collective, acquiring The Action Network on May 3 for 240 million U.S. dollars. Unlike with the FD-AP partnership or the DK-VSiN deal, there’s no potential conflict of interest here. (Except when we hand out mid-year awards celebrating the deal, of course.)

Shortest Lived Partnership of the Half Year

The suits running the Vegas Golden Knights didn’t think this one through, apparently. On a Wednesday in February, the NHL team announced a partnership with UpickTrade.com, a tout service offering picks on games. By that Saturday, besieged with backlash, the Knights ended the agreement.

This one didn’t even last a single Scaramucci.

UPickTrade bags a second award! In April, the Guadalajara, Mexico-based tout service announced that it was joining forces with Pete Rose, who would share his daily sports picks with subscribers. Once a cornerstone of “The Big Red Machine,” now Pete is part of the The Big Green Machine that accompanies the post-PASPA sports betting industry. This news was alarming to some … but also pretty much inevitable.

Whoopsie-Daisy of the Half Year

At least five online sportsbooks experienced outages either prior to the kickoff of the Super Bowl or during the game. One of them, DraftKings, paid good money to advertise during the big game (an industry first). This was inopportune timing, to say the least. The biggest sports betting day of the year produces volume that will test your technology — and in several cases this year, that technology, and the regulated U.S. sports gambling industry, failed. 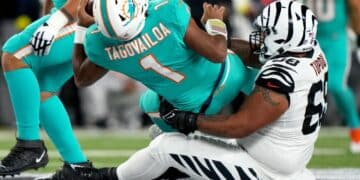 NFL Week 5, But First: All The Tua Hand-Wringing Is A Little Disingenuous