As many as seven receivers could go in Round 1, even with none in the Top 10 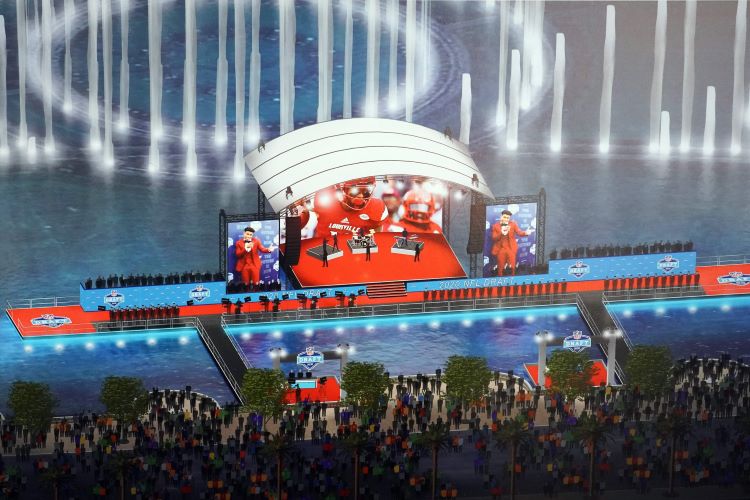 Las Vegas will host the NFL Draft Thursday night for the first time. It will be a litmus test of sorts on how the city can handle a major league event before the Super Bowl comes to Sin City in 2024.

Two years ago, Las Vegas prepared to host the 2020 NFL Draft before the league canceled the in-person event due to the COVID-19 pandemic. For this weekend’s three-day event, an average of 200,000 people daily are expected to attend, the Las Vegas Metropolitan Police Department estimates.

With thousands of fans traveling to Las Vegas, top sports betting operators in the area are hopeful of an uptick in wagering on the event. SuperBook Sports, whose roots trace to the Westgate Las Vegas & Casino Resort, has dozens of props available for the draft. One that bears watching is on N.C. State offensive lineman Ikem Ekwonu (-150) to remain on the board as of the fifth overall pick. The Giants, who struggled to protect Daniel Jones last season, could be a landing spot for Ekwonu at No. 5.

Despite the allure of traveling to Vegas for the draft, members of our editorial staff will largely be watching from their respective living rooms. Nevertheless, we will be monitoring closely how our prop bets recommended below do. Our picks, as always, may be best used for recreational purposes.

Back in 2012, the Seattle Seahawks drafted a short, speedy, strong-armed quarterback in the third round who would soon lead the team to its only Super Bowl title in franchise history. That quarterback was Russell Wilson, who, of course, was dealt to the Denver Broncos this offseason for fellow QB Drew Lock, tight end Noah Fast, defensive end Shelby Harris, and a slew of 2022 and 2023 draft picks.

One of those draft selections is this year’s ninth pick. Given the plethora of picks they’ve stockpiled in subsequent rounds, the Seahawks could use it to select Malik Willis, a high-risk, high-reward signal caller in the mold of Wilson. Willis, who starred at Liberty after transferring from Auburn, has a cannon for an arm and phenomenal foot speed, whereas Wilson had clearly lost a step by the time Seattle shipped him to Denver.

Would you rather have the Seahawks trade for Baker Mayfield, draft Malik Willis? Or just stay with Lock? pic.twitter.com/WOIIoBTeCS

The Seahawks are likely to slog through a down year regardless of who’s behind center, so why not take the opportunity to season a rookie with considerable upside — and who won’t eat up so much of the team’s salary cap (for the time being)?

While several sportsbook apps put the Seahawks’ odds of selecting Willis at +350, BetRivers and MaximBet consider it a 5/1 proposition, which is as good as any on the board.

Betting on the NFL Draft is fun.

Betting longshots in the NFL Draft is more fun.

Betting longshots in the NFL Draft and then watching the odds shorten up? Now that’s serious fun.
And that’s where I am right now with a bet I placed early Wednesday morning on DraftKings at +5000. It’s listed under “top four exact order,” and at the time of this writing — mid-morning on Wednesday — it’s already down to +2500, although I think there’s still room for this to shorten more.

As for Stingley? He’s the favorite to go third to the Texans at +200, but the steam — as all the cool kids call it — has been building for days. As for Johnson? He’s the one relative longshot at +350 to be the Jets’ pick at No. 4, but again — that sound you hear is steam.

The price for a top-shelf, franchise receiver in the offseason has skyrocketed. While Tyreek Hill, Davante Adams, and Amari Cooper have found new homes, the price tag has not been cheap. Hill, a six-time Pro Bowl receiver, signed a four-year, $120 million extension with the Dolphins to become the highest-paid wideout in the NFL.

For teams that are capped out, a more fiscally prudent option exists. They can select a top receiver in the opening round, then years later deal the receiver for picks before the player’s rookie contract expires. Though the Chiefs and Packers would have liked to keep Hill and Adams, it has become difficult to assemble a roster while paying a star wideout upward of $25 million a year.

At least five wide receivers appear to be locks for the first round — Alabama’s Jameson Williams, Drake London of USC, Treylon Burks of Arkansas, and the Ohio State duo of Garrett Wilson and Chris Olave. That leaves two more to get over 6.5. Near the bottom of the round, the Packers, Chiefs, and Lions all need help at wideout. Penn State WR Jahan Dotson and North Dakota State WR Christian Watson are both reasonable options for those teams.

If you are less confident that seven wideouts will be taken in the first round, Caesars placed the total in Round 1 at 5.5 receivers. It applied added juice at -400, but you are far less likely to experience a sweat over the final picks of the round.

I’m going with the same prop. My premise is that this simmering rebellion by the veteran WR crop over their salary levels may entice a couple of extra teams to go WR late in the first round — whether as leverage against an already disgruntled WR on their team, or to try to set themselves up by having an underpriced potential No. 1 for several years. Wilson, Williams, London, Olave, Dotson, and Burks seem like safe bets, so I just need one more. This could be a “sweat” right down to the final pick of the night by the Lions (from the Rams).

The Big Ten is recognized annually as one of college football’s top conferences. Yet, the conference is rarely in the conversation when it comes to contending for a national championship. The Big Ten has claimed only two national titles since 2000, with Ohio State (2002, 2014) responsible for both.

Don’t let a lack of national titles fool you, as there’s plenty of next-level talent spread throughout the Big Ten. It’s a big source of NFL players and that will occur again during this year’s NFL Draft. But there are unlikely to be as many players from the Big Ten selected during Round 1 as are envisioned by this prop bet.

FanDuel has the over/under on Big Ten players chosen Thursday at 6.5. It’s clear to me to take the under (+104) instead of the over (-138). At the most, I’m counting four players from the Big Ten to be selected: Hutchinson, Ohio State wideouts Wilson and Olave, and Purdue defensive end George Karlaftis. That’s it. That’s all.

I wish I had played this when the legal sportsbooks were offering it at 5.5, but there’s still some value here, particularly if you’re not buying the narrative that Thibodeaux will slide. The Jets, who pick fourth, are said to be locked in on edge rushers after getting to opposing quarterbacks for just 33 sacks last season.

Thibodeaux’s season at Oregon may have been derailed by injury, but he is still the type of athletic marvel that NFL teams tend not to pass on. He’s 6-foot-5, 258 pounds, and he ran a 4.58 time in the NFL Combine 40-yard dash, then followed that up with an impressive pro day back in Eugene. Even in a draft deep in edge rushers, he’s too good — and too many teams are looking to disrupt passing games — for him to fall to fifth or later.

The player draft position prop for Kayvon Thibodeaux (4.5) has generated a lot of attention 👀

The over on Thibodeaux has attracted the most tickets, yet that under has wound up with the second-most dollars 🤔

Check out the most popular and lopsided draft position prop sides ⬇️

I’ll be upfront: This pick doesn’t have tremendous value, and it’s far from a lock to occur. Sounds like a great bet, right?

While there’s better value on the board — my colleagues have offered numerous bets with impressive value within this piece — I like this bet for a few reasons. First, the NFL Draft often puts me to sleep. The draft is essentially my Super Bowl as a Detroit Lions fan, but it can be exhausting to wait multiple hours to hear 32 names called.

Betting this prop likely keeps me engaged for the entirety of Thursday night, and it might even have me paying close attention all the way to the Lions’ second selection at No. 32. Otherwise, I’m going to need a power nap when the draft hits pick No. 20.

Most importantly, though, I think at least five ACC players get drafted in the first round.

Is Ikem Ekwonu OL1 in this year’s draft? pic.twitter.com/7ujSBbxMUH

Ekwonu is a lock out of N.C. State, and the offensive lineman could be a Top 5 pick. NFL scouts love Johnson, the defensive end from Florida State, and he’s likely going in the Top 20. Four more players are deemed in the mix to go in the first round, three of whom need to be picked for the prop to cash.

Quarterbacks Kenny Pickett (Pitt) and Sam Howell (UNC) are in contention, as are Boston College offensive lineman Zion Johnson and Clemson cornerback Andrew Booth Jr. I like the bet because I think Pickett, Johnson, and Booth Jr. are all deserving of first-round selections, and you can never count out NFL teams to reach for quarterbacks. I could see Howell being taken late in the round, maybe even at No. 32 by the Lions or a team trading up to nab the UNC signal caller.

Again, there’s better value on the board, but why not spend three hours sweating this prop bet with me?