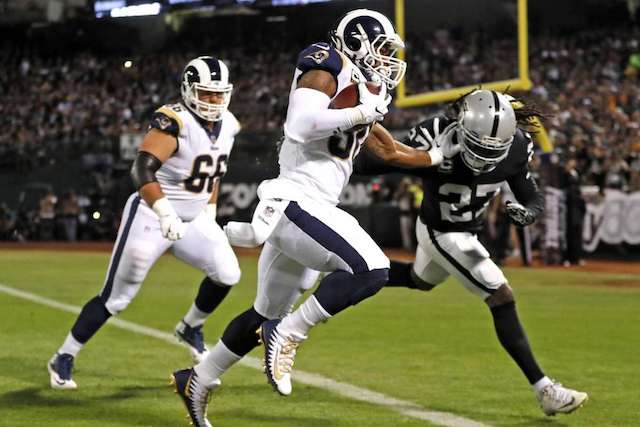 While you may have been sleeping on the East Coast, the Los Angeles Rams let the Oakland Raiders hang around a while before racking up 23 second half points in a 33-13 beatdown. Favored by 4 based on the static SuperContest lines (the line closed around 6), the Rams easily covered after falling behind 13-10 at halftime.

The Rams win gave roughly one-third of the pool a W, according to stats compiled by FantasySuperContest, in a Week 1 in which 22 of the record field of 3,123 Westgate Las Vegas SuperContest entries finished a perfect 5-0 and players picked up a average 2.43 points.

Here’s the against-the-spread record (and other records) for the NFL’s Week 1 (referencing non-static lines as in the SuperContest). Then we’ll get to the SuperContest selections and look closer at the results:

Speaking of survival, how’s your survivor pool looking after the (9.5-point favorite) New Orleans Saints got shredded by Ryan Fitzpatrick and the Tampa Bay Buccaneers? Oh, you picked the Ravens? Good.

Here’s the consensus (or most popular) SuperContest picks:

I picked the Bengals in the TPS Report and am a little surprised they had so much backing elsewhere. The Bengals turned the game around in the fourth quarter following an Adam Vinatieri field goal miss. Not a sentence written often but it was a 55-yard attempt.  Cincy then maximized on a short field and scored 17 unanswered points, including a late 83-yard defensive scoop-and-score.

As for the Ravens and Bills… wow. The Ravens alone covered the total of about 40 in a 47-3 thrashing that might cause holders of Bills over 5.5 wins to just shred their tickets now. Head coach Sean McDermott has yet to decide whether he’s going with Nathan Peterman or the No. 7 overall pick Josh Allen against the Chargers at home in Week 2. The Chargers have gone from about a 1.5-point lookahead favorite to now a full touchdown favorite. With such a swing you’d want to back Buffalo but holy heck, I’m not sure I’ll have the fortitude to support them anywhere but a pool requiring a full slate of picks.

Up in Minnesota, the Vikings brought steady pressure on 49ers QB Jimmy Garoppolo in a 15-of-33, three interception performance that included a pick-6. “As the game goes on, you have to bring the pressure on him,” Vikes defensive end Danielle Hunter said. “You see that he’s starting to get scared.”  Ouch.

Lastly, in New England, the Patriots held off the Texans to cover the 6.5 thanks in large part to the uncoverable Rob Gronkowski, who reeled in 7 catches on 8 targets for 123 yards and a score. In 2017 despite being a “public” team, the Patriots went 11-5 against the spread in the regular season.

Onwards as the Week 2 lines get released on Wednesday!