A lenient state licensing process for the offshore book could have damaging effects, analysts warn

Although Wednesday’s historic settlement between the U.S. Department of Justice and offshore sportsbook 5Dimes potentially clears the way for the sportsbook’s entry into the U.S. legal market, the embattled offshore internet sports betting operator may face an uphill battle in gaining licensure on the state level.

As part of a $46.8 million settlement that absolves owner Laura Varela of criminal wrongdoing, 5Dimes agreed to discontinue a practice of accepting wagers from U.S. customers out of its Costa Rica-based office, and reorganize under a new corporate structure. Beginning in at least 2011, 5Dimes facilitated millions in illegal wagers from U.S. customers, according to a non-prosecutorial agreement reached with the Justice Department, while attempting to conceal the location and the nature of the funds. The company has agreed to forfeit more than $30 million in assets, including a 1948 George Mikan rookie basketball card, and pay a fine of $15 million.

While attorneys for Varela believe the settlement provides a clear path for the company’s transformation into a regulated U.S. sportsbook, critics of the offshore market argue that it will be unwise for regulators to rubber-stamp a license for 5Dimes, which has already incorporated as 5D Americas LLC in Delaware. Such a move, they contend, could open the floodgates for other offshore operators accused of unscrupulous business practices to orchestrate a move into the U.S. market.

“What kind of a message do you think it will send to all of the operators who played by the rules, who subjected themselves to licensing requirements, and who have overcome financial and licensure hurdles if they just start letting offshore books come in?” a regulatory expert told Sports Handle.

Among the assets seized by U.S. authorities were a 1948 George Mikan rookie basketball card and precious metals.

And according to a #5Dimes press release, the company has already incorporated as 5D Americas LLC in Delaware.https://t.co/WZsHvE6GKG

Varela is the widow of Sean “Tony” Creighton, the company’s founder. Creighton’s remains reportedly were found in a Costa Rican cemetery last September, months after he vanished during a brazen kidnapping. The discovery occurred nearly one year after he was abducted at a traffic stop in the republic’s neighborhood of Granadilla de Curridabat, according to the Costa Rica Public Ministry, which confirmed the events leading to Creighton’s apparent kidnapping.

“On the day of the events, the accused followed him during the night to Granadilla de Curridabat, where, with the presumed collaboration of the two Transit officials, they allegedly boarded the businessman when he was traveling in his car and, subsequently, he was taken to the site of captivity.”

Creighton was allegedly murdered despite a ransom payment of nearly $1 million in bitcoin made by his family to a slew of kidnappers, the UK’s Daily Mail reported.

“My husband’s death was tragic, but he loved 5Dimes and all of its loyal customers,” Varela said in a press release. “Now his spirit will be able to live on as the 5Dimes brand begins this new chapter. Along with a team of trusted advisors, I am exploring how we might relaunch 5Dimes as a legal sportsbook and casino in the legal, regulated U.S. market to continue serving our many loyal customers.”

The Justice Department will not prosecute Varela, whom they say had no hand in the day-to-day operations of 5Dimes before or after her husband’s disappearance and murder.

The charges against 5Dimes stem from the company’s reliance on third-party payment processors (TPPPs) to process credit card transactions from U.S. based customers. Once the TPPPs received the betting funds from the customers’ credit cards, the funds were transferred to bank accounts in the names of shell companies controlled and operated by Creighton until his disappearance and death, the Justice Department alleged in the settlement. Over an eight-year period through 2018, Creighton exercised “full and exclusive control over 5Dimes,” even as he used an alias to hide his identity and operated the business through several shell companies, according to DOJ.

Prior to his purported abduction, Creighton and the other operators of 5Dimes were under investigation by the Department of Homeland Security in connection with a possible $2 million money laundering scheme through the use of Amazon gift cards.  As part of the scheme, 5Dimes instructed bettors to purchase the Amazon cards, then email a photo of the cards to the company, along with a receipt of the purchase. In addition, 5Dimes offered to award customers with a 10% bonus for those who opted to receive payouts that were loaded onto an Amazon gift card, Recode reported.

In 2016, the Department of Homeland Security filed a seizure warrant application in the U.S. District Court in Philadelphia seeking to claw back $159,000 among more than a dozen Amazon accounts allegedly connected with 5Dimes, according to Recode.

“Through our 5Dimes investigation, Homeland Security Investigations illuminated a massive global network of criminals whose profession was to launder proceeds for drug cartels, kleptocratic regimes, illegal mining operations, and fraudsters,” said Brian A. Michael, special agent in charge of HSI’s Philadelphia office, in a statement issued by the Justice Department.

While the DOJ may claim victory in securing one of the largest offshore gaming settlements on record, the financial remunerations pale in comparison with two notable cases. In 2017, Western Union agreed to forfeit $586 million in an agreement with the Justice Department and the Federal Trade Commission, while admitting to failing to maintain an effective anti-money laundering (AML) program, as well as aiding and abetting wire fraud. Western Union had been warned by authorities dating back to 1997 that its money transfer systems had been utilized to send payments from Florida to offshore sportsbooks. Not only did Western Union possess knowledge that the gambling transactions posed a heightened risk for money laundering, according to DOJ, the money service provider maintained insufficient internal controls that failed to curtail illicit transactions originating from the U.S.

Five years earlier, Pokerstars agreed to forfeit $547 million to the U.S. federal government while Full Tilt Poker agreed to make a $184 million repayment to foreign customers in order to resolve money laundering charges with DOJ. Pokerstars is a division of The Stars Group (TSG), a Toronto-based company that was acquired by Flutter Entertainment in October 2019. When Fox Sports entered into a partnership with TSG months earlier, it became the first major U.S. broadcast network to unveil a co-branded sports betting platform.

The settlement between 5Dimes and the Justice Department represents a 10-fold decrease from the two other agreements struck by DOJ.

“When you’re looking at a settlement and discipline, $46.8 million compared to the probable billions of dollars that 5Dimes made over its lifetime of operation seems really small to me,” an industry expert said. “I don’t know that this sends a message to the illegal offshore books that we’re tough, that we’re coming for you.”

Ahead of the settlement, 5Dimes suspended service to U.S.-based patrons on Sept. 21, with an eye on rebranding as a legal, regulated U.S. sportsbook. Jeff Ifrah, an attorney for Varela, told the Wall Street Journal Wednesday that 5Dimes’ next move will be the pursuit of a sports betting license in New Jersey. Ifrah is also a founding member of the interactive gaming trade group iDEA Growth.

As 5Dimes attempts to expand into the U.S. market, New Jersey will likely emerge as a logical starting ground, two sources told Sports Handle. But New Jersey Division of Gaming Enforcement Director David Rebuck has been clear that he has no appetite for black-market sportsbooks, so getting licensed there could be a very hard sell.

“A word of caution,” Rebuck told the All American Sports Betting Summit audience at the Jersey Shore racetrack Monmouth Park in July 2019. “We made a decision in New Jersey a long time ago: If you engage in taking offshore bets, or if you engage with or support companies that take bets outside of the U.S. [from American customers] with an offshore site…. You’ll never get licensed in New Jersey. So don’t waste your time. You’ve made your bed in the past, and you’ll have to live with it for a very long time.”

Regulators may also demand the removal of any individuals who were involved with day-to-day operations of 5Dimes when the company conducted illegal operations, as a condition of licensure. As part of a 2016 settlement with the Nevada Gaming Control Board, former CG Technology CEO Lee Amaitis resigned from his position, while the company paid a fine of $22.5 million to settle illegal sports gambling and money laundering charges.

Offshore sportsbook 5Dimes has reached a settlement with federal prosecutors to end a criminal probe. It's forfeiting $46M, winding down US operations and looking to potentially reopen as a legal US operator in the near future. w/@katherinesayre https://t.co/tLwmFE6ZSo

Over the past three years, the American Gaming Association’s (AGA) primary mission as it relates to sports betting has been to unlock the safeguards of legal, regulated gaming for U.S. consumers, while creating a viable alternative to the illegal market, said Casey Clark, senior vice president, strategic communications at the AGA.

“Ultimately, licensure of a company and its officers is at the discretion of experienced gaming regulators who are very good at their jobs,” Clark told Sports Handle via email. “I wouldn’t anticipate leniency for anyone trying to enter this market, and it could be particularly challenging for a company that had admittedly been illegally taking U.S. bets until just a few days ago.” 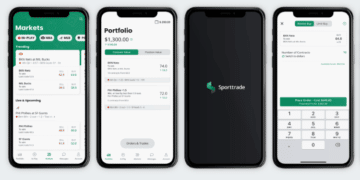