Sports betting fared better than casino gaming, but was down 46% 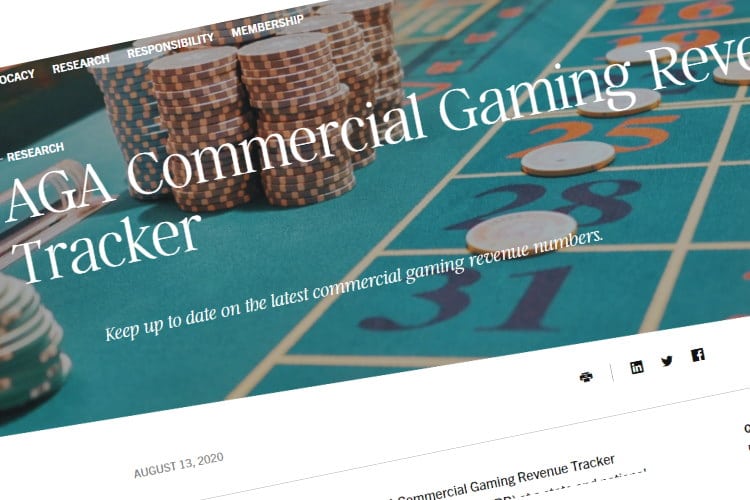 The American Gaming Association on Thursday morning shared news that the sports betting and gaming industry should have been expecting — commercial gaming revenue was down 79% for the second quarter of 2020 as compared to the same period in 2019. While the news was sobering, it was also available for the first time from a national perspective, as the AGA unveiled its new Commercial Gaming Revenue Tracker, which allows the organization to compile and compare commercial gaming revenue across the country and package it together, rather than the fragmented state-by-state data that has existed in the past.

The tracker includes reporting from commercial casinos only. Tribal casinos are not currently part of the program.

Across the country, sportsbooks reported gross gaming revenues (GGR) of $324.9 million year-to-date, according to the AGA, up 10.4% over the previous year.

Sportsbooks were creative during shutdown

“The almost entire lack of sports did create a vacuum and a void for those who did want to wager on sporting events,” said AGA President and CEO Bill Miller during a conference call on Thursday. “Now that we have NBA, NHL, golf, as well as racing, there are outlets for people that want to bet on sports. The NBA and NHL have done really well in terms of their bubble concept, and the NFL is today, moving forward with a regular season that looks like the previous regular season.”

Sportsbooks may have weathered stay-at-home orders across the U.S. better than retail casinos due in large part to their digital platforms. Nearly a dozen states have legal online/mobile sports betting with remote registration, including Indiana, Nevada, New Hampshire, New Jersey, Pennsylvania, and West Virginia. During the height of the restrictions, Colorado became the first state to allow operators to go live online during the pandemic, and the Washington, D.C. Lottery followed suit with its GamBetDC app in late May.

In June, according to the AGA, sports betting handle was down about 15% across the country, and many states saw a more significant rebound in July. The NBA and NHL re-started their seasons in “bubbles” in July, while Major League Baseball’s Opening Day was on July 23. The PGA Tour restarted its schedule without fans in June, and just last weekend held the first Major of the season, the PGA Championship, which was postponed from May.

During the call Thursday, Miller emphasized that gaming establishments in the U.S. have developed “rigorous and innovative” safety protocols, including the installation of plexiglass barriers, filtration systems, hand sanitizer stations, smoking bans and more.

“With businesses returning to casino floors and sportsbooks seeing increased action, the gaming industry is steadily charting a responsible path to recovery that prioritizes health and safety, supports the communities where we operate and offers first-class entertainment,” Miller said.