If you thought line shopping was just for sharps, think again, as these crazy parlay payouts differ wildly among the books 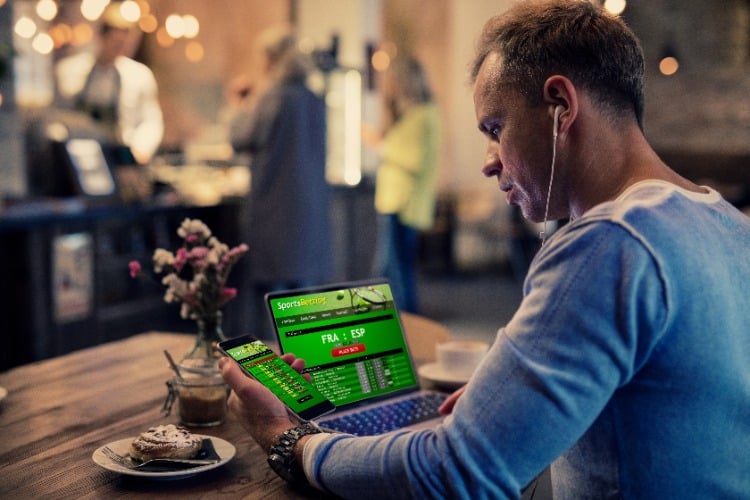 If anyone ever sat down and punched out an Elmore Leonard-like “10 Rules For Sports Betting” list (or a Supreme Being-like “Ten Commandments”), I bet the following two rules — in one form or another — would make the list.

And as for parlays … well, come on: It’s hard enough to get one pick right, never mind two. Or three. Or four. Five? Six, seven, eight? There’s the well-known UNLV Center for Gaming Research study that showed sportsbooks make over 30% on parlay bets, compared to 5% or so on straight bets. And add in the fact that there’s no hard-and-fast rule to parlay pricing, thereby leaving us poor gamblers at the mercy of the big bad books.

Well, except I’m not a professional gambler, and if I feel like taking the Cowboys and giving the points, am I always going to make sure I’m getting -2.5 instead of -3? Am I always going to try and find the -105 instead of the -110? Sometimes, sure. But most of the time, I’m not. Nor, I imagine, are most recreational bettors.

And as for parlays? I mean, they are freaking fun. And popular. And sure, I’m going to lose most of the time, but the thrill of sweating a potential massive payout for a few bucks? Sign me up.

So we’ve already determined I’m a fish who doesn’t always line shop and who bets longshot parlays. Recreational gambler, I am he.

But I will tell you this: There is one situation where I will always line shop, and that’s when I’m … betting parlays. So while I may be a fish, I’m at least sprouting the very beginnings of lungs.

Let’s take, for example, the Thursday night matchup between the Miami Dolphins and the Cincinnati Bengals, and let’s look at five sportsbooks and how they’re pricing a same-game parlay “anytime touchdown” wager.

You’re feeling like this game may shootout, and you want to bet that each of Joe Mixon, Ja’Marr Chase, Tee Higgins, Tyreek Hill, and Jaylen Waddle hit paydirt. (This is an objectively bad bet, but that’s not what we’re here to discuss, m’kay?)

Looking at the individual odds, you’ll see some noticeable differences. Mixon, for example, is at -130 at DraftKings and Caesars, but all the way at -190 at Barstool. Waddle is +135 at Caesars, but Barstool has him at +138. And so on.

You would assume that when you mash all five of the touchdown scorers together, you’d get a reasonably similar price across the five books. You’d be very, very wrong:

All of a sudden, line shopping matters. This isn’t about grinding edges like a pro, trying to eke out pennies on the dollar; this is about finding the best price so when you get lucky, you really cash in.

For example, look at this stupid bet I placed during Week 2 of the NFL season: It was a four-leg parlay that demanded Nick Chubb, Jonathan Taylor, Trey Lance, and Taysom Hill each score two touchdowns. (For the record, Chubb did, Taylor didn’t, Lance broke his ankle, and Hill … well, I’m not entirely sure I had full control of my faculties when I threw him in there. Anyway … )

While I didn’t price this out across all the books, know this: Caesars was offering this parlay at +410629, while FanDuel’s odds were nearly double that, at +802520. 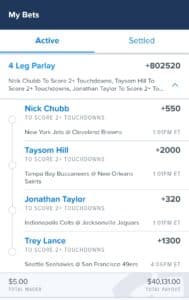 Quite the difference, yeah?

Another way to look at this: If you made ridiculous bets like these all the live-long day, you’d have 410 chances at Caesars to break even, and more than 800 shots at FanDuel.

Even my sports betting rabbi, Capt. Jack Andrews, the sharpest of the sharp, agrees. (Kinda.)

“Yes, shop for the best price if you’re going to bet them,” Andrews told me. “It still won’t be a profitable approach, but at least you lose less in the long run.”

You want more? I’ll give you more.

From this past Sunday, a six-leg anytime-touchdown parlay featuring Travis Kelce, Amon-Ra St. Brown, Miles Sanders, Kyle Pitts, Waddle, and David Montgomery was paying out +7332 at BetMGM, +10706 at Caesars, and +15113 at DraftKings.

Obviously, these are longshot bets, and you might go a lifetime without hitting one of them. But if you’re going to play these objectively terrible parlays, at least do yourself a favor and take the time to price them out. The differences are stark, and there’s seemingly little rhyme or reason to them. I guess that’s what happens when you start mushing and mashing big numbers together. I dunno. I ain’t a math guy. 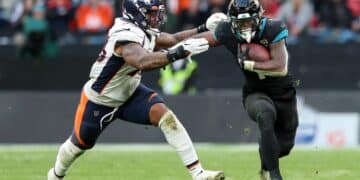 NFL Week 9: Time To Listen To My Gut, For I Am The Parlay King