Andrew Brandt on the NFL and Sports Betting: Fantasy Helps ‘Bridge the Gap’ 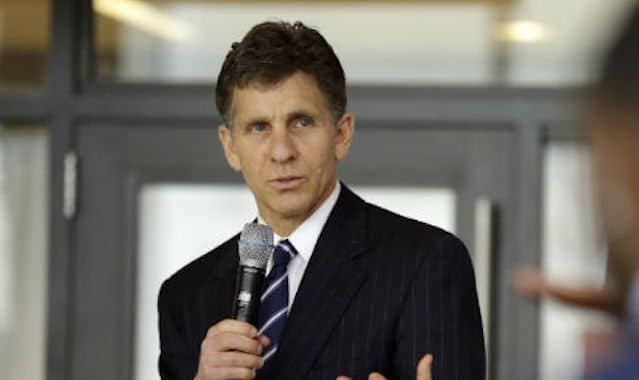 Andrew Brandt sees the NFL through many lenses: He’s an attorney who served as a player agent early in his career, he spent nine years (1999-2008) in the Green Bay Packers front office as vice president, and now he’s a frequent speaker on sports business who pens a weekly column for TheMMQB.com. (Brandt is also the host of the podcast “The Business of Sports” and Director of the Moorad Center for Sports Law at Villanova Law School.)

As New Jersey’s sports betting case now has a date for oral arguments in the Supreme Court of the United States, all parties have to contemplate what winning and losing the case looks like. With the expansion of sports betting a realistic outcome, will the NFL and others sport leagues come to embrace it? And what might that look like?

Given Brandt’s varied experiences and expertise, SportsHandle caught up with him on Tuesday to discuss NFL ratings, how sports betting might impact ratings, and a landscape in which sportsbooks are a potential revenue source for the leagues, rather than an adversary.

SportsHandle (SH): In a recent article you wrote for The Athletic, dispelling narratives about NFL ratings and a nosedive some have predicted, you pointed to the league’s Twitter and Amazon deals as examples of experimentation. Do you think the issue for the NFL and media partners is simply figuring out where to reach the audience?

Andrew Brandt (AB): Well, I think the NFL has to respond to sort of changing patterns of viewing, changing patterns of consumers, and that’s true for every entertainment option right now whether it’s movies, television, all sports are thinking about this in the board rooms of NFL, NBA, NHL, Major League Baseball. How do we attract young viewers?

And clearly the digital media companies are going to be a big part of that. And the fact that the NFL has already established these relationships, and as I say, kind of giving out morsels every year. Last year Twitter. This year Amazon. I’m sure there will be a different one next year. So, when they get to the plate at 2020 or 2021 they’ll have all these options. So, it’s two-fold for the league. It gives them incredible revenue options but also a way to attract the younger viewers.

SH: Come 2020, do you foresee the pie of games simply getting chopped up more ways?

AB: Well, I don’t know about chopped up. I mean, I think you will have your stream-only games like you have now still with Yahoo. You may have a few of those. They won’t be marquee teams. And then you’ll have the dual method that we’re seeing on Thursday nights — over the air and over the top together.

AB: I do and I think they’ve seen it with fantasy. Fantasy has given them an incredible engagement tool for fans, and I think it’s something that is going to bridge the gap between no gambling and gambling. Because we all can have our own viewpoint on whether fantasy sports is gambling or not. But, the NFL has embraced it, as have all these leagues, and the next step would be to embrace it even further with gambling.

And I guess the best evidence that they’re open to it is putting a franchise in Vegas and they’re going to figure out the regulations going forward. But, clearly they see it as another major engagement tool for fans that could boost viewership, revenues, all of the above, and then another revenue option that’s going to be huge.

SH:  Speaking of the revenue options, what do you think is the likeliest ways or way that the NFL and other pro sports leagues will derive revenue from an expansion of sports betting?

AB: That’s the ultimate question. Clearly, if the NFL has a piece of the betting action, and I’m not sure exactly how that would be through an individual company, through some sponsor deal, through some league or team partnership with one or more casinos. That’s what has to be worked out, and … But I do say this, it just seems like we’re only limited by creativity and imagination as to ways that could happen.

SH: Looking at the United Kingdom teams and leagues, it seems that the most lucrative avenue right now is sponsorship. I mean, it seems crazy to think right now that the NFL and sportsbooks might be partnered directly in some way, but do you see that as a path that the NFL may go down at some point?

AB: Yeah, and again, I think that the key is framing. I don’t see sportsbooks having a prominent place on jerseys like in overseas. But how prominent, how is it framed, can the NFL maintain its stance of integrity while having these sports books being part of sponsorship deals? Those are all the things they have to figure out, but I just sense that it’s coming.

SH: In conversations with perhaps any former colleagues or people you know in the league, what is their thinking as far as the most realistic scenario at least in the early going for monetization?

AB: I haven’t really had that conversation, but, you know, I think everyone’s watching and waiting with the Supreme Court case and then is there going be a legislative solution?

SH: Yeah. Well, given the financial opportunity do you think the NFL really does want to win the case?

AB: As opposed to what?

SH: Right, that’s my thinking. I mean, 25 years now after former commissioner Tagliabue sat before the a congressional committee on PASPA, Roger Goodell is just carrying the torch, and maybe they’re ready to lose but they’ve already been fighting this case so long that they’re just continuing.

AB: I mean, they have to fight it I guess for this again in the name of the integrity. You have Adam Silver writing an op-ed about the bringing gambling into legalization and he’s fighting it. It does send mixed messages.

SH: So, let’s say that the NFL and the NCAA does win. You mentioned possibly there being a congressional solution. And Georgia Representative Doug Collins told ESPN’s David Purdum that Congress feels like they’re basically abdicating their responsibility to govern to the courts. My question is, do you think that if they win that the leagues would then go to Congress and attempt to work out a solution that is not PASPA?

AB: You’re saying if they win or lose?

AB: Yea, I do. Dave and I have talked about that where it seems like it’s kind of everyone’s open to a legislative solution and the NFL has so much power as we see the President tweeting about them all the time. Has so much power to get something lobbying wise, legislative framework that could work for everyone. And as we’re talking here it does seem like a no lose situation for the NFL.

SH: I read in MMQB earlier this year from your colleague Albert Breer that the NFLPA was in talks about implications of (expanded) legalized sports betting. What type of revenue split do you think that they might attempt to command, and how might a changed landscape look for the players?

AB: I don’t know. I mean, I think if you ask the league they would say well if we bring in X revenues the players get 46%, 47%, 48% based on the CBA. I don’t know if there’s another split that they had in mind, but keep in mind the NFLPA has its own deal with, I don’t know if it’s DraftKings or FanDuel, as do all these teams have their own deals, sponsor deals. So, you wonder if they could do their own model the same way the NFL is doing its model in addition to the shared revenue. Now again, the CBA talks about all revenues being split. I would think that would include gambling revenues.

SH:  That brings up another question. Right now, correct me if I’m wrong, but the league still prohibits players from sponsoring or endorsing any alcohol products. So they would seemingly have to modify the CBA regarding sports betting and endorsements for that to happen.

AB:  And you talk about MMQB, my article two years ago where I discuss the hypocrisy of shutting down Tony Romo’s fantasy football convention simply because, it was not even in a casino, it was annexed to a casino. I did hear from the NFL very high up saying that we’ve seen your article, we’ve discussed it, and just so you know we’re trying to be evolved about this subject. So, they understand the mixed message and of course the most head scratching one of all is that when the Vegas thing happened Commissioner Goodell praised the regulations in Nevada, which are the exact regulations he’s opposing in New Jersey.

SH:  Yeah, and I’ve seen that argument made with respect to New Jersey’s sports betting opt-in period under PASPA.

SH: Last question: NFL and all pro players obviously earn exponentially more money than their predecessors  in the 60’s and 70’s, so theoretically the incentive to throw a game or attempt to fix a game would be less now, especially with so many cameras and digital trails. In light of that, do you think expanded sports betting today would pose the same theoretical risk to the game’s integrity?

AB:  I mean, again you’re talking about the NFL, which I think is probably the least susceptible of any of the major sports simply because they have the most players, because you’re dealing with 11 interdependent parts on every play.

You know, I’m going to come back to fantasy because the feeling why the NFL other leagues have no problem with fantasy and Roger Goodell has said this because it’s a mashup of all these players on individual outcomes and nothing to do with team outcomes. You could make the argument that players are more susceptible to nefarious influences in fantasy than in other gambling because what if a guy said to a running back, ‘I need you to get under 100 yards here.’ Versus some running back having a real impact on team outcome. It seems to me there’s more worry on the fantasy side. So, that’s sort of the interesting dynamic about influence.