One Arizona Tribe Has Big Plans For Sports Betting, Other Gaming Expansion 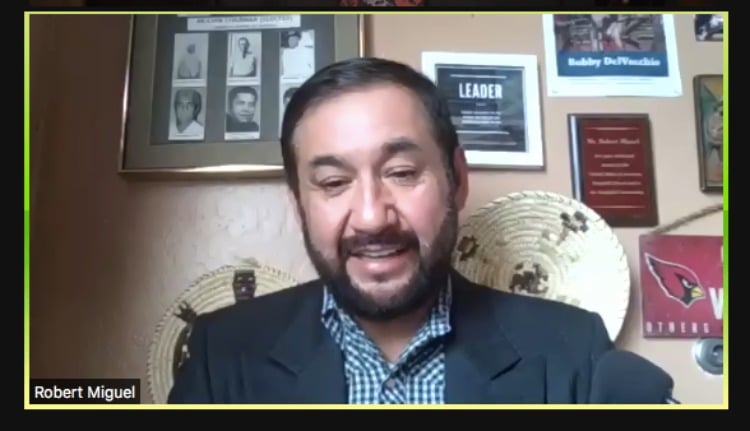 When the state of Arizona and its tribes came to an agreement on the latest gaming pact earlier this month, it was, for the tribes, more than just a business agreement.

Rocha, a member of California’s Penchanga Band of Luiseño Indians, was a bit more passionate: “Before gaming, we weren’t allowed to dream. A lot of times we’ve had this conversation about how gaming has changed the Native American experience. … We’ve been allowed to take back our place in American culture.”

The Ak-Chin have big plans to do just that. The 1,100-member tribe, located on the outskirts of the Phoenix Metro area, has long been partnered with Harrah’s Entertainment, which is now part of the Caesars Entertainment portfolio following an acquisition (and renaming) by Eldorado Resorts. And now that the Harrah’s Ak-Chin Casino can add sports betting to its repertoire, Harrah’s will operate a retail sportsbook with hopes of also securing one of the 10 mobile licenses that are earmarked for tribes in the state’s new gaming law. That law also allows for tribes to add dice games, like craps, and roulette to their offerings.

Ak-Chin want to use pact to the ‘max’

The Ak-Chin will be, well, all in … and then some. With the new compact under review by the U.S. Department of the Interior, Miguel says his tribe is already looking forward. The tribe was initially granted more than 47,000 acres in 1912 by the Taft Administration, but that number was cut back to 22,000 acres a year later, Miguel said. The plan going forward is to buy back the land and someday put a second casino — which the Ak-Chin negotiated for in the new compact — on that land.

“Even though the compact is in place and we’re trying to figure how to use that to its max, we also are starting to sit down and figure out what comes next, to have a dream and vision about what gaming looks like going forward,” he said. “Right now, looking at development, we want to make it more of a family destination. There are a lot of great options, and one I can elaborate on, when Ak-Chin went into compact negotiations with the state, about 25 years ago, Ak-Chin was able to have a second casino, but leaders at the time thought there was no need for that, so we took it out of the negotiations. But I want to revisit that. There’s a need to be able to grow land-based-wise.”

Miguel envisions a massive entertainment complex beyond the casino and resort his tribe already owns and operates. Besides a casino and hotel, the Harrah’s Ak-Chin Resort has a spa, shopping, live entertainment, and multiple dining options. While Miguel’s focus is on land-based expansion, he also said that Arizonans should expect online gaming in the future.

“It’s a process that’s going to be entertained or spoken of,” he said. “We have to sit down and really, truly educate ourselves. I could see it going that way. We’re able to give them that overall experience on how they would like to utilize their gaming options in a respectful way. It’s something that will be coming our way eventually.”

iGaming appears to be the next step in many states. Illinois lawmakers are considering an expansion, and at least one Indiana lawmaker was hoping to add online casino to his state’s offerings this session. Casino operators in Michigan, New Jersey, and Pennsylvania are among those that currently offer online casino play  with virtual slots, table games with live dealers, and digital versions of other traditional casino offerings.

The current pact is for five years with a two-year renewal. Under new law, 10 mobile wagering licenses will be available to tribes and 10 professional sports venues. FanDuel (Phoenix Suns) and DraftKings (PGA) have already laid their claim, and it’s probable that BetMGM will partner with the Gila River tribe. Both Penn National/Barstool Sports and WynnBET have partnerships with NASCAR, which could get one of them market access in Arizona.

Listen to “2. ‘Get a Grip’: The NFL got Sportbooks, Arizona adds betting & lightning round w/ Dave” on Spreaker.

Though Miguel wouldn’t divulge what company would run sports betting for his tribe’s casino, it’s likely to be William Hill, through its partnership with Caesars. It would seem likely, then, that William Hill and the Ak-Chin would be in the running for a mobile license. When asked about how the approximately 20 tribes in the state will divvy up the 10 mobile licenses, Miguel stayed mum.

“It’s hard for me to comment on that,” he said. “I would feel and think and know it will be a fair process overall. We want to make sure everyone is getting a fair opportunity with these licenses. Of course, the Ak-Chin are in hopes of getting a license. There are 10 licenses earmarked, and we’re going to find a solution for the other half. Despite the dilemma for the the amount of licenses, I think we’ll all move forward in a good way.”