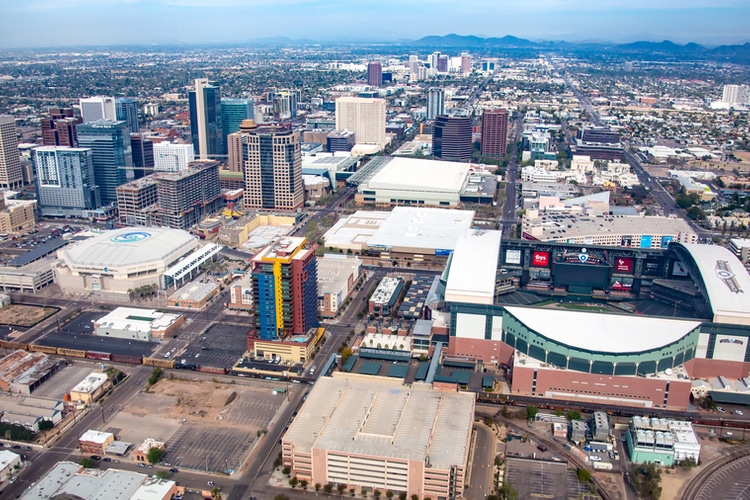 Arizona became the fastest state to reach $1 billion in sports betting handle in the post-PASPA era, clearing the milestone in less than three months of wagering after the state’s Department of Gaming reported $466.7 million in wagers for the month of November on Tuesday.

The Copper State needed just 82 days of legal wagering to clear $1 billion, bettering the previous record of four months and 11 days established by Virginia with its May revenue report. Arizona is the 13th state to surpass $1 billion in handle in the post-PASPA era, which began in May 2018.

The monthly handle was 4% lower than October’s record of nearly $479.3 million, but that month also included two extra weekend days of wagering. With only two commercial retail sportsbooks in operation, mobile betting has accounted for 98.6% of the more than $1.2 billion wagered through the first three months.

Despite the nearly $19.4 million dip in handle, operators statewide reported an increase of more than $13.9 million in gross revenue from October to close to $50.3 million, thanks to a 10.8% hold. That made Arizona the sixth state to have a month with at least $50 million in gross revenue, along with New Jersey, Nevada, Illinois, Pennsylvania, and Michigan.

There was also significantly less promotional revenue in November, with operators reporting close to $18.4 million as the adjusted amount finished just shy of $31.9 million. There has been $75.6 million of promotional revenue since launch, but the 63.5% of revenue eligible to be taxed in November was more than double the 28.5% from October.

The state collected nearly $3.2 million in tax receipts, more than triple October’s total, which barely cleared $1 million. Online revenue, which is taxed at 10% compared to 8% on the retail side, totaled more than $3.1 million for November.

With three months of revenue reports available, Arizona bettors have established DraftKings, FanDuel, and BetMGM as their top options. Both DraftKings and FanDuel saw slight declines in handle, yet still cleared $100 million, while BetMGM had a small uptick to $93.1 million as the trio accounted for more than three-quarters of the $459.3 million wagered online.

Of the six operators to post eight-figure handles, only DraftKings failed to post a double-digit win rate on gross revenue. Its $12.5 million, though, trailed only FanDuel, as its eternal rival claimed $15.4 million thanks to a state-high 13.6% win hold. BetMGM reported nearly $9.5 million in revenue while recording a 10.2% win rate.

Caesars was essentially on an island in fourth place for both handle and gross revenue, with $63.5 million and $7.4 million, respectively. The battle for fifth was far tighter than October, as Barstool Sportsbook fended off WynnBET by less than $100,000 in handle after a 32.2% month-over-month drop to $17.8 million compared to Wynn’s 14.4% decline.

BetRivers is still looking for a foothold after generating just $2.7 million handle in its first full month of operation, and all of its $245,964 in gross revenue was declared promotional. TwinSpires has yet to pay tax on any of its revenue, while Unibet made its first payment of $3,251 after totaling $32,511 in adjusted revenue.

Closing the book on a bloody November

With 24 states and Washington, D.C., accepting wagers, operators posted their highest monthly totals for gross and adjusted revenue in the post-PASPA era in staggering fashion. The November handle of $7.4 billion was $146.3 million less than October’s record of nearly $7.6 billion, but operator gross revenue from month to month surged 61.9% higher to $723.3 million, as the win rate jumped nearly four full percentage points to close to 9.8%.

It was the highest monthly hold since operators posted a 10.1% mark in October 2019, and the fourth-highest in the 42 months post-PASPA. Adjusted revenue also climbed substantially higher, increasing 83.8% to nearly $614.4 million. The 8.3% hold on adjusted revenue is the fifth-highest of the post-PASPA era, but the second-highest of 2021 behind the 8.5% from July.

Though there are more states conducting sports betting, it also again shows the drawing power of wagering on pro football. In another point of comparison, both June and July saw national holds above 9%, but the combined tax receipts totaled $85.5 million, as nearly $6.5 billion was wagered in the two months.