Law isn't clear on number of skins, and regulator still sorting out licensing fees and how tribal licenses will be allocated 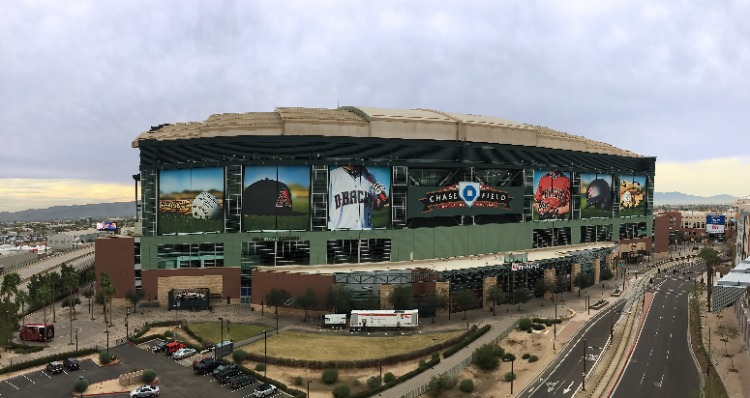 With one exception, Arizona stakeholders on Monday reiterated their position that they believe the state’s new sports betting law calls for a single skin, or mobile platform, per licensed “event wagering operator,” and they requested that the Arizona Department of Gaming make that clear in its regulations.

The comments came when the ADG held the second of two meetings to review draft sports betting regulations.

Besides that discussion, ADG Director Ted Vogt reiterated that the plan remains a Sept. 9 sports betting launch. To that end, Vogt told stakeholders that the immediate goal is to have a revised set of rules available for review by the end of this week, with the idea of approving final rules in the first half of July. There will also be a second, short public-comment period before the final rules are put in place.

Though proposed rules are often opened for a 30-day (or longer) public-comment period, Arizona lawmakers legalized sports betting with an emergency clause, meaning the ADG has more flexibility to move the process along quickly.

What didn’t get addressed during the meeting is nearly as interesting as what did. The proposed rules do not include licensing fees for major licenses, including event wagering operators or management services providers, and there is no explanation for how the ADG will divvy up the 10 event wagering licenses earmarked for tribal casinos. There are more than 20 federally recognized gaming tribes in the state, so not all will be licensed, and the law does not lay out how that decision process will work.

Law is ambiguous on number of platforms

With regard to the number of mobile platforms that will be allowed in the state, the law allows for 10 event wagering licenses for professional sports franchises and 10 for tribal casinos. Most stakeholders support one skin per operator, but some interested in operating in Arizona have recently questioned if there could be more than one per licensee.

The law is not quite clear, because the word “platform” is not defined in the statute, but is used in the following section of the law, Section 5-1303:

Operators and sports franchises have argued that “platform” refers to retail vs. mobile, meaning that, for example, event wagering operator XYZ could contract with William Hill to run its retail sportsbook and PointsBet to run its digital sportsbook. Each would require its own “platform” to take wagers.

How this plays out will be left to the ADG to sort out, and as yet, nothing in the proposed regulations indicates what a platform is or how many any one event wagering operator is entitled to.

“We understood one skin per license,” said David Miller, representing TPC Scottsdale. “I don’t know if a single-skin model is better or worse for the Arizona market, but that’s what we understand it to be.”

Said Amy Lynn Pierce of the Arizona Diamondbacks: “As someone involved in the legislation, I can say it was ALWAYS our belief there would be one skin. … It’s extremely important to us that that be clarified.”

The only dissenting voice either day was from Matt Olin, the CEO of Apache Gaming Enterprises.

“Our position is that the legislation is very clear in that it provides for more than one platform per license.”

It’s not yet public knowledge who the San Carlos Apache Tribe, which owns and operates the Apache Gold Casino in suburban Phoenix, will partner with for sports betting. DraftKings will operate a retail casino and digital platform in partnership with TPC Scottsdale through a deal with the PGA Tour. Both Penn National Gaming and WynnBet have deals with NASCAR, but market access via Phoenix Raceway hasn’t been announced yet.

Vogt invited comments on any and all rules, and the number of skins was the most popular issue. During Friday’s session, multiple potential licensees were clear that they, too, understood that one skin was the plan. 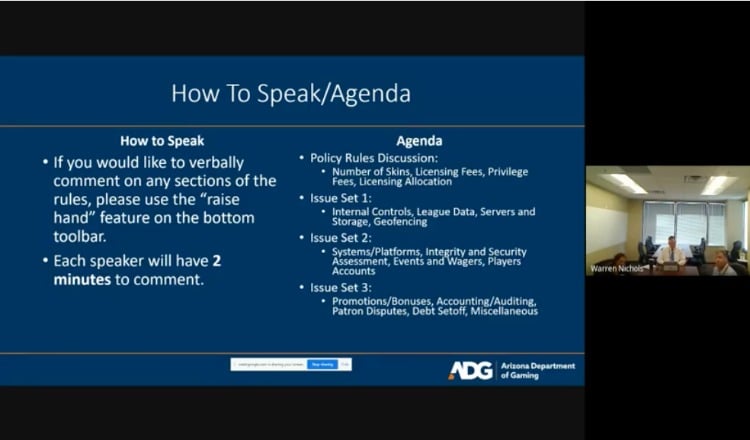 Several other topics came up during the 25-minute meeting: