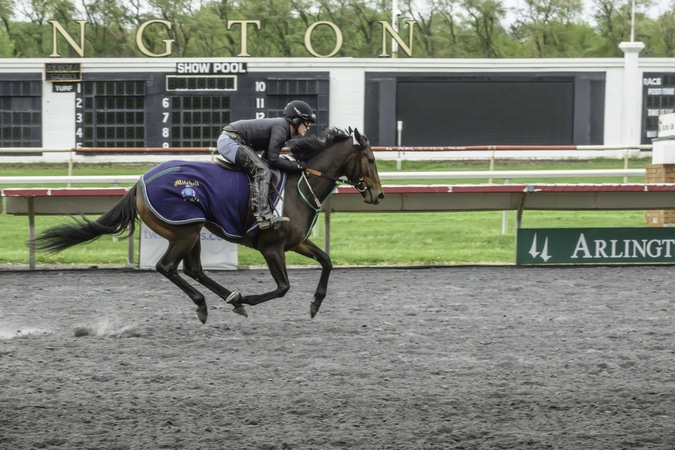 A late breakdown relating to a force majeure clause prevented Arlington Park International and the Illinois Thoroughbred Horsemen’s Association from reaching agreement on a contract for live thoroughbred racing Friday, forcing a second recess that will carry over to Monday morning.

A “force majeure” clause in a contract frees both sides from liability or obligation if an extraordinary event — such as an epidemic — stops either side from fulfilling their obligation. The current COVID-19 crisis could be such an event.

The two sides were originally expected to have a signed deal in place to award the dates on Thursday — a requirement from last year’s bill signed into law by Gov. J.B. Pritzker that legalized sports betting in Illinois — but there were issues raised in the contract language in the hours before Thursday’s meeting, leading to a recess until Friday.

That meeting, however, broke down in stunning fashion minutes after it began. ITHA Executive Director David McCaffrey said he received a draft of the new deal via email at 1:08 p.m. CT, eight minutes after the meeting was scheduled to begin.

After a recess of nearly three hours, Kerry Lavelle, an attorney for the ITHA, asked for the weekend to review the contract, saying the group needed to review the documents “line by line.” The recess was granted by Illinois Racing Board chairman Daniel Beiser.

Its a real shame what churchill/Arlington Park is doing to the fans here in illinois. What they have done in last few weeks is a slap to the face to any horseman that puts their livelihoods in illinois racing. Clear what they are doing and the people at Hawthorne deserve better.

If the projections were far apart, the contract would go to an independent third party. McCauley stated both sides would likely agree to have Mike Belmonte, the IRB’s Director of Mutuels, serve as arbiter in such instances to choose one projection.

McCauley stressed that the second issue was technically still open but there “was an agreement in form signed by Arlington a few minutes ago and sent to the ITHA” that covered reconciliation in the event of a force majeure.

After a warning from Beiser to the two sides to keep the negotiations out of the public forum, Arlington Park President Tony Petrillo said “we hoped we have finalized an agreement, we sent a final agreement, signed agreement to the ITHA that addressed the reconciliation payment, which we feel is a final offer and should close this issue.”

McCaffrey sounded blindsided by Petrillo’s statement, responding, “I address all of you by saying I don’t know what that was all about. I was not under the impression the arbitration clause had been solved.”

He broke off his train of thought to point out, “I just received a contract sent to my email at 1:08. At 1:08. It’s 1:14. I don’t know what to say … but I will say this. We sent in a contract, a red-line contract to the racing board this morning and I said, so that there was no ambiguity here, so that no one could say that we were running away from a deal that we made or whatever the accusations may be, consider this offer signable by us.

“And that was sent around at 9 o’clock this morning. Does anyone see the unfairness in sending us a contract at 1:08? On a call that was supposed to start at 1 p.m. and have me say yes or no? So I don’t know what to say other than at 1 o’clock when I called into this meeting despite all the feverish attempts that have been made over the last two or three weeks … we had a deal that we would agree to sign that was submitted this morning to the racing board and we will stand behind that.”

McCauley explained to McCaffrey there were negotiations among lawyers for both sides after the ITHA contract was submitted and “were amenable to suggestions” of purse projections being settled via arbitration. McCauley suggested to the board to take a “final recess” to allow McCaffrey and the ITHA to review the language of the deal “see if there could be an absolute, final resolution to the agreement,” to which Beiser agreed.

In any case, there is bad blood, as you know better than I. ITHA continues to feel aggrieved by CHDN…so they are making as strong a statement as they can. CHDN appears bent on trying to coldly get as good a deal as they can.

When all parties reconvened, Lavelle attempted to detail where the breakdown took place, noting the deal Petrillo sent over had taken them by surprise. “We didn’t see that coming, we didn’t hear it was coming, we got it and looked at it as a step in the right direction,” he said.

“So what he did was send over a document that was similar to, but not exactly like a document that I had sent over yesterday, that for purposes of this chronological exchange of documents we’ll call ‘Version 2.’ We took the break we did and started looking at it, and because we couldn’t necessarily see all the changes that were made, we just requested a redline of Version 2, we’ll call that ‘Version 3’ because that’s the one Tony signed.”

Lavelle said he asked Arlington Park Vice President and Senior Counsel John Matter to send a “redline that is just the changes you guys made.” The ITHA counsel said he received the redline and the “claim that Tony purportedly signed, and those two did not match up.” Lavelle added the new document had a “whole other new force majeure clause in there, and we’re like, ‘Holy cow, here we go again.'”

Lavelle asked for the weekend review the latest version and potentially offer changes.

Petrillo originally wanted to reserve his commentary until after the board took action on the agenda items but stated: “In order to to help the ITHA move forward in a more expeditious manner, the agreement that I signed is the agreement that they should be working off of. We notified them of that at the time that was sent and that is the document, for matters of clarification, and no other document.”

Beiser then called for a recess until 9 a.m. CT Monday, offering a near verbatim of his recess statement Thursday “in which we will revisit this agenda item and, one way or the other, come to a conclusion on this item.”