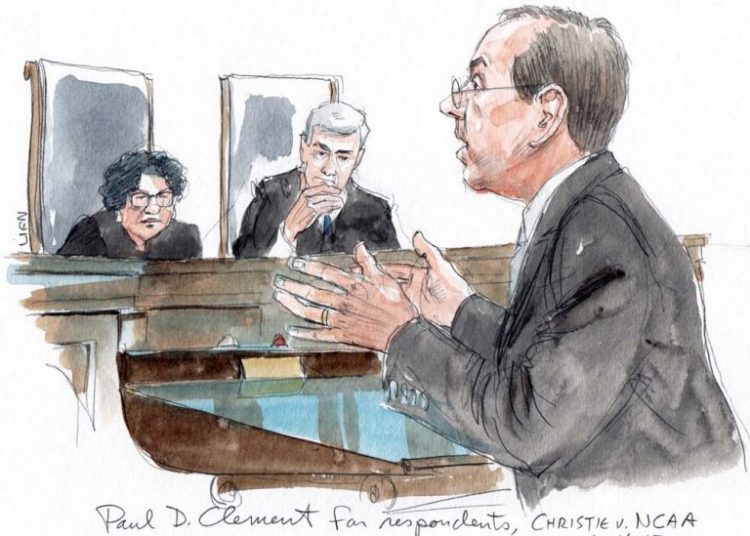 Inside the Supreme Court during Christie v NCAA oral argument

The Supreme Court of the United States heard oral argument on December 4 in Christie v NCAA, the case that will shape the future of legal sports betting in the U.S. On Friday, the high court released audio from argument, which you can to below or listen at Oyez, which provides a moving transcript identifiying the speaker.

Previously SportsHandle offered an analysis immediately after argument and another in plainer English. You can also learn more about the attorneys on both sides here, plus get predictions on the outcome . In the audio, you’ll hear Ted Olson arguing first on behalf New Jersey and co-petitioner for 25 minutes, then Paul Clement for the sports leagues for the ensuing 20 minutes. Jeffrey Wall of the Solicitor General’s office then goes for 10 minutes before Olson caps it off with a rebuttal.

It was an eventful argument with heavy-hitting attorneys and a number of punctuations. Here’s a few key parts worth nothing:

At 7:30 Justice Breyer says in part on a federal law:

But what it can’t do is say that our determination is that the states roughly can do it as they want, but they can’t do it that way; for to do that is to tell the state how to legislate, in which case it is the state and not the person who becomes the subject of a federal law.

To which Olson responds, “I wish I’d said that myself, Justice Breyer.”

At 23:55 we hear from Justice Gorsuch who questions Olson on statutory interpretation and then asks, “But you — you’d take a win on statutory grounds, wouldn’t you?”

Beginning at 27:35, Chief Justice Roberts discusses the boundaries of  federal and state law, prompting Clement to say, “I thought your — and maybe I should amend my remarks to say I don’t think that there would be a commandeering problem with that statute. Now, there might be some other federalism problem.” Clement later asks to make an amendment at 41:45, before Justice Alito asks Clement about PASPA’s peculiar operation.

Finally, go to roughly 53:20 (or a bit earlier for more context) where Justice Roberts puts Wall in a box that has no great escape route:

Roberts: Well, is that serious? You have no problem if there’s no prohibition at all and anybody can engage in any kind of gambling they want, a 12-year-old can come into the casino and — you’re not serious about that.

Wall: I — I’m very serious about it, Mr. Chief Justice. The problem that Congress was confronting was state-sponsored and sanctioned sports gambling schemes. It didn’t care if I bet with my buddy on the Redskins game or we had an office pool. It wasn’t going after all sports gambling.

Olson wraps it up around 1:20 in his voice made for narrating children’s books.

A decision in the case is forthcoming in the Spring of 2018.