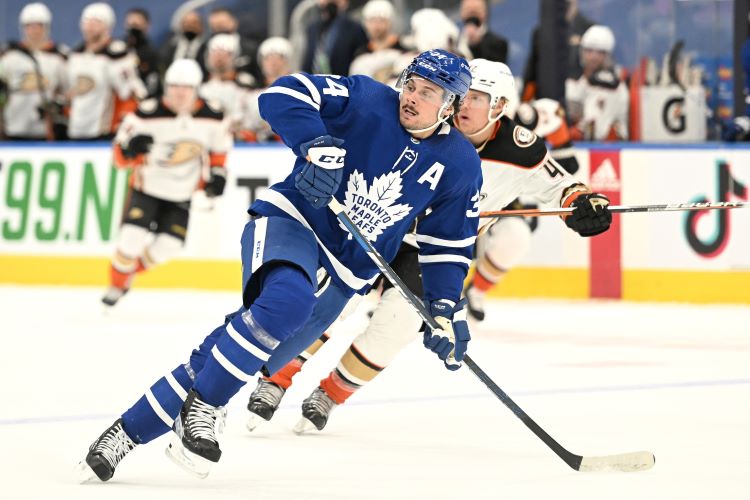 Auston Matthews is going where no active NHL player has gone before after confirming he’s signed an endorsement deal with Bet99.

The deal is believed to be for three years and is worth seven figures, according to Rogers Sportsnet hockey analyst Elliotte Friedman. Bet99, which is a gray sportsbook in Canada, is not currently licensed to take wagers in the province of Ontario. Matthews is only promoting Bet99’s free-to-play Bet99.net site.

Bet99’s pay-to-play site is licensed by the Kahnawake Gaming Commission, a tribal regulating authority based in the province of Quebec, and also gaming authorities in Malta and the Netherlands. Tribal rights sit above the criminal code in Canada, and the tribe operates on the basis it has an inherent right to run gambling operations in the country.

Ontario’s regulated iGaming market is set to launch April 4, and it’s unknown if Bet99 has applied for a license with the Alcohol and Gaming Commission of Ontario and iGaming Ontario in the province. Bet99 has not responded to a request for this information.

Matthews is one of hockey’s brightest stars playing in one of its biggest markets. The 24-year-old has netted at least 34 goals in each of his first five seasons with the Toronto Maple Leafs and is on pace to surpass 50 goals this season for the first time in his career. Matthews is also known for his extensive charity work with Sick Kids Hospital in Toronto, further adding to his status as one of the most popular athletes in the city and across Canada.

I’m proud to announce my partnership with https://t.co/Yxm2hzAd3b and am excited to explore and develop opportunities in this space alongside their team. Stay tuned for more! 👀 pic.twitter.com/IRQeWvx3GV

Ontario is preparing for a barrage of additional sports betting advertisements in the coming weeks and months that will coincide with the launch of the regulated sports betting market. Canadian media analyst Adam Seaborn reported over 28 gambling advertisers, mostly offshore and non-regulated, ran ads on TV in Canada last year, spending over $100 million (CAD). Those numbers are expected to be surpassed in 2022 as roughly 30 regulated operators flood the marketplace.

Strict sports betting advertising restrictions are now in place throughout Ontario. Private operators can advertise on company landing pages and websites and must use direct marketing tactics to attract customers. There can’t be any incentive-based marketing, so TV commercials advertising a deposit match or free bet will be prohibited. There needs to be a level of consent before an operator is allowed to market real-money offers to potential users.

For example, Canadian UFC great Georges St-Pierre is another Bet99 ambassador. In his TV ads, he simply holds up a phone with the company logo and recites a few scripted lines. St-Pierre’s marketing is to the company’s pay site, unlike that of Matthews, who’s currently only promoting the free-play arm of the company. Bet99 is also partnered with the CFL’s Montreal Alouettes and Canadian soccer club CF Montreal.

PointsBet Canada is using the cast of the hit Canadian TV comedy series Trailer Park Boys to promote its product in Ontario and across the country. The sportsbook is also partnered with the NHL Alumni Association, among others. PointsBet will be an approved operator in Ontario as of April 4.

Canadian hockey icon Wayne Gretzky is already a brand ambassador for BetMGM, which is expected to be licensed in Ontario shortly. The deal, which was finalized last summer, is worth roughly $10 million.

On Oct. 22, the National Hockey League Players’ Association struck a deal with the NHL so players could pursue advertising and promotional opportunities relating to sportsbooks. However, single-event betting needs to be legal where the betting entity operates and the endorsement legal in that particular jurisdiction. Players can’t promote betting on NHL games or engage in any betting activity in the promotion or advertisement.

Last December, the Ottawa Senators became the first NHL team to feature a gambling sponsor on their helmets for home games. The team and Bet99 struck a seven-figure deal, opening the door for more pacts, like the Matthews arrangement.

The NHL and many of its teams in the United States already have numerous sports betting partnerships in place. PointsBet, FanDuel, BetMGM, DraftKings, and William Hill are just some of the sportsbooks to enter the hockey space. In-venue sportsbooks are opening all across the league, including at the United Center in Chicago, the home of the Blackhawks. Even the Arizona Coyotes have launched a digital wagering platform.

The NHL regular season wraps up on April 29, a few weeks after Ontario’s planned sports betting launch. Sportsbook industry leaders have identified hockey as a key way to connect with, and acquire, local Ontario sports bettors. With three Canadian NHL teams currently holding playoff spots in the standings — the Maple Leafs, Edmonton Oilers, and Calgary Flames — the playoff push will certainly pique the interest of hockey fans and bettors at an opportune time for sportsbooks launching in the province.