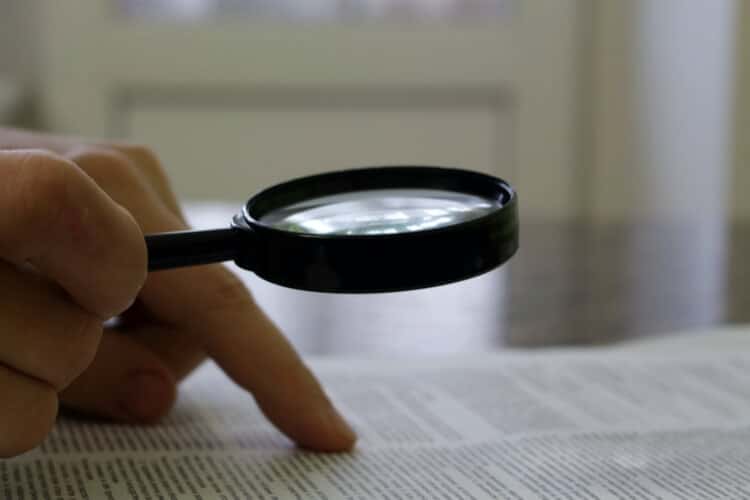 In six weeks, California voters will head to the polls and decide the fate of legal sports betting in the nation’s most populous state. Unfortunately, most of the people heading to the polls don’t care about wagering, legal or otherwise.

The ballot, though thin on initiatives by California standards (there are seven), is filled with mightier issues, including reproductive freedom, the sale of flavored tobacco products, a marijuana business tax, and new guidelines for dialysis centers.

Suffice to say, the legality of sports betting doesn’t have the same broad reach as whether or not a woman can have an abortion or if certain kinds of tobacco are hooking more kids. And most people can expect a situation at some point in their lives where the availability of medical marijuana or dialysis touches someone close to them.

Sports betting does not carry that level of urgency or impact for most. According to a Morning Consult survey written about in Forbes in 2021, 12% of adult Americans regularly gamble on sports. So far, those both for and against legal wagering in California have spent about $400 million trying to convince the other 88% of the electorate that wagering is a critical issue.

Two betting initiatives will be on the ballot. Proposition 27 is backed by a group of seven sports companies that propose legalizing statewide digital wagering with platforms tied to tribal casinos and the bulk of proceeds being directed to homelessness issues. Proposition 26 is a tribal-backed proposal that would allow for in-person wagering at tribal casinos and four horse racetracks. Proposition 26 would expand the offerings available at casinos, adding some ball and dice games as well, and would make it legal for private citizens to file lawsuits against the state’s card rooms.

Check out the ballot

State agencies recently released voter guides — which have not yet physically reached voters, but are available online — and ballots will go out in the mail Oct. 8. Those perusing voter guides will have to make it to Page 57 in order to view sample ballots outlining the initiatives. Here’s what that page looks like: 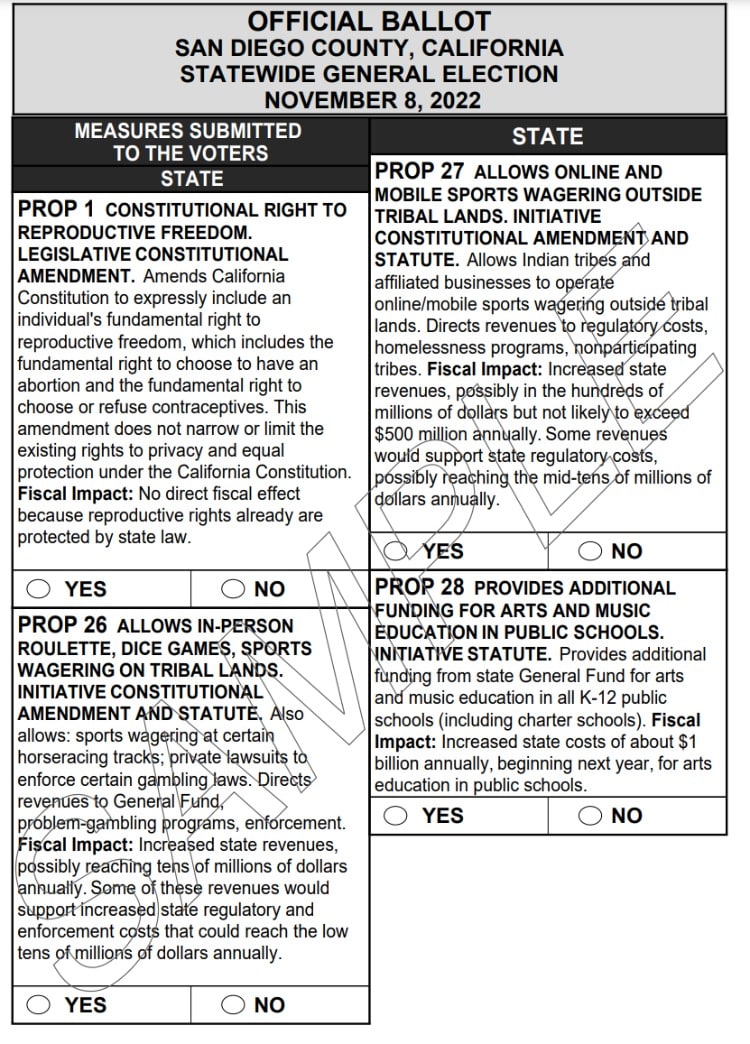 After months of being bombarded with advertisements during sitcoms and football games and on Facebook and Twitter, the question of whether or not to legalize will be decided by a tick of a pen in a two-inch square. The tiny type does little to indicate the passion and dollars spent in the hopes of legalizing in the nation’s largest state.

While pro-Proposition 27 advertisements have focused on helping to “solve” the state’s homelessness problems, advocates for the homeless have not backed the initiative en masse. And while homelessness is a key issue for voters in the California, the connection to sports betting has raised some red flags, with opponents and advocates for the homeless pointing to the idea that legal wagering is just another potential ill that could lead to homelessness. The word “homelessness” is not in the title of the proposition on the ballot and doesn’t appear until the ninth line of the initiative entry.

Interesting update on California sports betting. $400M already sunk into this issue by operators & tribes. Shows you just how big the stakes are. https://t.co/qPKFlNEwna

How the vote will go is largely unknown, with research firm Eilers and Krejcik putting the odds at 50-50 in late August, and a recent Public Policy Institute of California poll projecting that 34% of respondents would vote yes, while 54% would vote no. Proposition 27 proponents last week announced they’d be pulling back on television advertising to focus on reaching voters more directly. Some in the media have pointed to the decision as “ominous,” but two major players in the industry, FanDuel CEO Amy Howe and BetMGM CEO Adam Greenblatt, last week said the campaign isn’t giving up, just that it’s “pivoting.”

“The feedback we’ve had is that there has just been too much TV around Prop 27, and the counter-messaging from Prop 26 [is] just overwhelming voters,” Greenblatt told Sports Handle on the sidelines of the MarketWatch Best New Ideas In Money Festival in Manhattan. “We are pivoting to a much more direct-to-consumer approach to maximize our chances.”

The plan will be to reach voters via social media and direct mail as the campaign heats up in the final weeks. Pollster Adam Probolsky said on the Sactown Talks podcast this month that such a move usually indicates a campaign is “underwater.” And he believes that unless something changes in the current landscape, both Propositions 26 and 27 will fail.

“If you don’t see big ‘yes’ money, they are both going down,” Probolsky said. “I think they’re both failing unless you see the $100 million spend.”

Prediction market: Neither prop will pass

As the election nears, it’s not just polls that are showing Proposition 27 lacks support. The prediction platform Polymarket shows that its customers aren’t bullish on either Proposition 27 or Proposition 26. On Tuesday, the platform showed that Proposition 26 futures on the “no” were going for 77 cents and Proposition 27 “no” futures were at 84 cents, indicating consumers believe both will fail.

Some thoughts on the sports betting ballot initiatives in California:

* If both initiatives fail, the status quo prevails and the tribes win.

There has been little advertising around Proposition 26, either for or against, as tribes have said for months that they would be happy with the status quo, and that the main goal is to defeat Proposition 27 and keep control of gaming in tribal hands.

While it appears the tribes will continue to funnel money into defeating Proposition 27 rather than supporting their own initiative, one card-room owner told Sports Handle to expect more ads opposed to Proposition 26 in the coming weeks.

The card rooms, through their “Taxpayers Against Special Interest Monopolies” political committee, have raised less money than the tribes or the commercial operators, but they still have some $40 million to spend in the weeks headed up to the election.

The group points to the legal provision in Proposition 26 as potentially damaging. It would make it legal for private citizens — including tribal members — to sue the card rooms. The tribes have long contended that California’s card rooms have been operating illegally, but no court has agreed, and in many instances they have declined to hear cases on the issue.