Bars, Restaurants, And Sports Betting: A Triple Play Of Profit

When bars and restaurants add sports betting to the menu, positive results occur 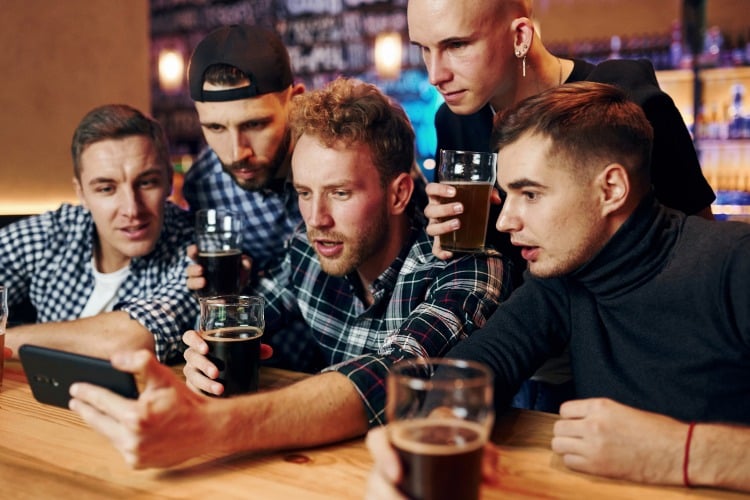 A round of shots on … the guy who just hit a five-leg same-game parlay!

That scenario was one of the main takeaways from a study last summer from CGA Strategies, a food and drink consultancy operation. Using Illinois as a test subject, it looked into the effect mobile sports betting has — and will have — on the restaurant and bar world. Its conclusion is not surprising: Sports betting can be a boon to bars and restaurants.

For example: Over 20% of bar and restaurant patrons say they’ve engaged with mobile betting apps while at their chosen establishment.

And once CGA drilled down into that cohort, the numbers jumped off the page. Seven out of 10 sports bettors said they’d be likely to stick around to order another drink or two if they had action on a game. Furthermore, nearly 80% of bettors said they’d stay after the game was over for more fun and frivolity if they won their bet.

Overall, 71% of people who have bet on sports while at a bar/restaurant said they’d extend their stay if they were watching a game they had bet on. And 12% of those people said they are typically liquor drinkers — adding to the potential for that round of shots mentioned above.

Is it any wonder, then, that Buffalo Wild Wings has teamed up with BetMGM? That Hooters inked a deal with DraftKings? That Philadelphia is going to be home to two  sports betting-themed restaurants — one via famed restaurateur Stephen Starr, the other by Barstool Sports? That Dave and Buster’s is trying to get into the game? That numerous bars and restaurants around the country are making sure their televisions are tuned into whatever game sports fans are looking for?

“Sports betting companies want to acquire new users, and they’ve all become experts on digital strategies that work just fine,” said Seth Schorr, the CEO of Fifth Street Gaming and chairman of Downtown Grand Hotel and Casino in Las Vegas. “But having an omnichannel approach and engaging your customers in person is also super important.”

Schorr has been in the business for over 30 years, with current holdings that run the gamut from casinos to restaurants and seemingly everything else in the combined space. He also counts BettorView as one of his companies. That business provides bars and restaurants with TV screens that show live odds from the mobile sportsbooks legal in that state, along with some analytics thrown in. The company even sends “brand ambassadors” into the bars to help teach people the ins and outs of sports betting.

And Schorr thinks the relationship between mobile sportsbooks and the food and beverage industry has barely scratched the surface.

“A big piece of the puzzle that is very important that we haven’t started to see yet — but mark my words you’ll see it over the next few years — is perks,” Schorr said. “I know the psyche of the gambler pretty well, and while many gamblers gamble to win cold hard cash, they also like earning rewards, getting free meals, getting access to special things that the other guys don’t get access to. That’s what Vegas was built on as much as the allure of winning a jackpot.

“The mobile operator doesn’t have a casino to drive their patrons to,” Schorr continued. “But working with a restaurant operator so their customer can win free steaks, free wings, access to special seating, special parties –those are ways mobile sportsbook operators can engage their customers and build customer loyalty. The name of the game right now is customer acquisition, but it will very quickly evolve to retention and wallet share. Free bets and odds boosts are good tactics, but so are free steaks and invitations to special Super Bowl watch parties.”

The one true unicorn

While chain restaurants and sports betting companies are in the beginning stages of getting awfully cozy with each other, Brian Vasile has a whole ‘nuther thing going on.

He’s the owner of Grand Central in Washington, D.C., and last October, he opened up his own sportsbook inside the restaurant, becoming the only independent sportsbook in D.C.

This sports bar has two kiosks and a betting window. It's cash only. Next year a mobile app will also get up and running. Grand Central is teamed up with @ELYS_Gaming which will handle the technology and hardware/software end of things for a share of the profits. pic.twitter.com/Ab6B8yWMUA

Granted, the sports betting rules in D.C. are … different. Mobile betting is allowed, but citywide only through the much-maligned Gambet. If someone wants to bet with BetMGM, Caesars, or FanDuel, they have to be within a two-block radius (or inside) of Nationals Park, Capital One Arena, or Audi Field.

Sporting two ticket windows and a quartet of kiosks, Vasile — who uses Elys Game Technology for the backend — said he’s thrilled with his decision to open the book, and that it’s been a profitable enterprise thus far.

But it’s also been profitable in other ways.

“Food and beverage is up five to seven percent,” Vasile said. “And as betting becomes more and more mainstream, we’re finding patrons who came here just to eat are putting down $5 parlays or $20 on the game that’s on the TV.”

As a result, Vasile expects food and beverage to go up another few percentage points, providing a real-world example of the CGA study and Schorr’s comments: Introduce the idea of sports betting inside a bar or restaurant, watch how people stay longer and spend more.

In fact, Vasile says he’s been contacted by numerous bar and restaurant owners in Ohio, where sports betting kiosks will be allowed in a certain number of establishments.

And this doesn’t surprise industry vet Schorr one bit.