Get $150 Free for MNF with Barstool Sportsbook Promo Code SHNEWS150

New users at the Barstool Sportsbook can turn $20 into $150 if the Commanders and Eagles combine for 150+ yards. 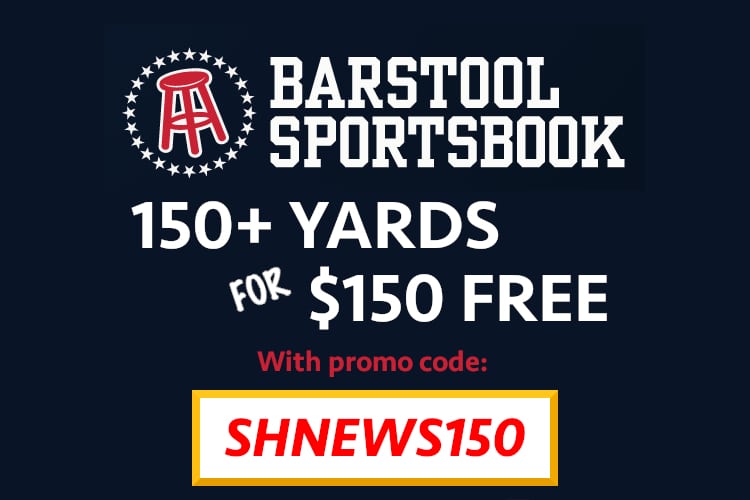 Sunday’s Week 10 NFL slate was not short on excitement, featuring nonstop action and thrilling finishes all throughout the afternoon. Tonight’s Monday Night Football clash between the Washington Commanders and undefeated Philadelphia Eagles will face a tall task in terms of following up Sunday’s card, but should be able to deliver the goods as primetime NFL games typically do.

Speaking of delivering the goods, that is exactly what the Barstool Sportsbook is doing with its latest new-user welcome bonus: all new players can Bet $20 and Get $150 if both teams combine for 150+ yards of total offense on Monday Night Football. Register today using the Barstool Sportsbook promo code SHNEWS150 and you’ll be in line for the goods shortly after your bet is settled and the necessary conditions are met!

Click here to begin the sign-up process, or head over to the Barstool Sportsbook mobile app or desktop site with the promo code SHNEWS150 in mind.

After you’ve created your account, beeline over to the banking department and deposit some funds. Any amount will do as long as it is at least $20, which is the minimum stake required for this promotion.

Lock in a $20+ wager on any market listed on Barstool Sportsbook for Monday Night Football: Commanders vs Eagles. Just keep in mind that parlays will not qualify, along with live bets or any wagers processed early using the site’s cash-out feature.

As long as the Commanders and Eagles combine for 150+ yards of total offense, the result of your initial wager will not matter. Win, lose, or push, if that 150+ mark is met you will receive $150 in sportsbook bonus cash within 72 hours of your bet being graded.

All bonus cash is yours to keep as soon as you’ve wagered the entire sum at least 1X at odds of -200 or longer. In this case, a wager with -250 odds would not qualify towards your rollover.

All players must be 21 years or older and presently located in an active Barstool Sportsbook state at the time of wagering. If you’ve ever signed up for an account with Barstool in the past, you will unfortunately not be eligible to claim this offer.

Washington HC Ron Rivera and his Commanders (4-5, 4-4-1) have seemingly found new life since QB Carson Wentz fractured his ring finger in Week 6 and was forced to hand the starting duties to backup Taylor Heinicke. Since taking over as the Commanders’ starter in Week 7, Heinicke has stepped up to the task, leading Washington to a 2-1 overall record to keep them in the mix in the NFC.

Washington did suffer a crushing loss in last week’s home game against the Minnesota Vikings, falling 20-17 after rallying to take a 17-7 lead early in the fourth quarter. They’ll now look to overcome that defeat tonight against the only other team in the NFL with a better record than Minnesota – the undefeated division rival Philadelphia Eagles. But unlike last week’s barn burner, Washington will need to pull off this potential upset on the road at Lincoln Financial Field.

Aside from the team’s strong play as of late, Washington should come into this game with a little extra confidence considering the defense’s performance during its 24-8 loss to the Eagles at home back in Week 3. Despite the less than desirable result on the final score, Washington’s defense held the explosive Eagles offense to 24 points, which is currently tied for Philadelphia’s second-lowest scoring output of the season.

Philadelphia Eagles -11 with the Barstool Sportsbook

HC Nick Sirianni and his juggernaut Philadelphia Eagles (8-0, 5-3 ATS) will continue to play with house money this week as they look to extend their undefeated campaign into Week 11. They will attempt to do so against the feisty Washington Commanders, who they defeated on the road back in Week 3, 24-8.

Philadelphia has been flat-out dominant no matter where they’ve played this season, however it’s more than clear that the Eagles are a completely different animal at Lincoln Financial Field. Philadelphia has yet to lose a game outright in 2022, but has posted a lowly 1-3 record against the spread on the road this season. This is opposed to the team’s flawless 4-0 record ATS at home, which includes a pair of impressive covers against the 6-3 Dallas Cowboys and 8-1 Minnesota Vikings. It’s never easy laying double-digits in a divisional game, but if there was ever a place for the Eagles to pull off this cover, it is at the Linc tonight.

As far as injuries are concerned, the Eagles will be without a pair of corners against the Commanders as veteran Avonte Maddox and rookie Josh Jobe are both set to miss tonight’s game. Washington’s defense will also be hurting, as starting linebacker Cole Holcomb is set to miss his third straight game with a foot injury, while superstar DE Chase Young was not activated and will also be forced to miss yet another game as he works his way back from an ACL tear.