Use our Barstool promo code SHNEWS150 and turn $20 into $150 when you sign up for tonight’s Thursday Night Football matchup. 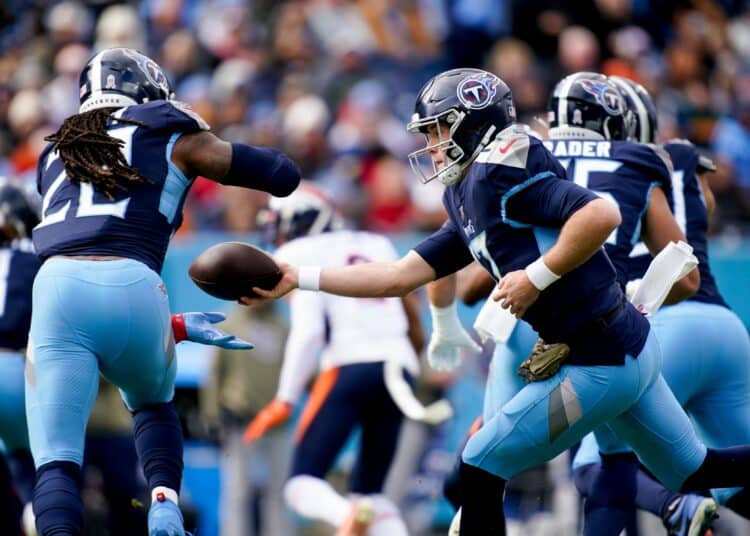 We have a nice matchup to kick off the festivities for Week 11. The AFC South-leading Tennessee Titans will travel to Green Bay to take on the Packers.

For this enticing matchup, new sports bettors who register with the Barstool Sportsbook can jump on a Bet $20 and Get $150 welcome offer! And trust me when I say it’s an easy $150. You are in the money if both teams combine for 150+ yards of total offense. It’s that simple.

Just use our Barstool Sportsbook promo code SHNEWS150 to claim your bonus offer.

Lock Up Your Easy $150 Before Thursday Night Kickoff

Start by clicking here to sign up with the Barstool Sportsbook to guarantee you receive your offer. Upon registration, use our promo code SHNEWS150.

Next, you’ll want to go and explore the banking options and fill up your balance with at least $20. Once you’re good there, place a $20 bet on any market for this Thursday Night Football matchup.

Barstool Sportsbook is one of the best sports betting sites. With its plethora of player and game props and generous odds, bettors will surely find a market to use their initial welcome offer bet on.

Just keep in mind to qualify for this offer, users cannot bet on parlays, make a live bet, or process any early cash-outs on their first wager! If you follow these directions, win, lose, or push, you’ll be in line for your $150 in bonus cash once that 150+ yard mark is met. Your bonus cash should land in your account within 72 hours of your first bet’s settlement.

Once you’ve wagered through your bonus cash 1X through with odds of -200 or longer, you’ll be able to withdraw your winnings at any time. To clarify, a wager with -250 odds would not qualify here.

To be eligible for this offer, users must be 21 years or older to play – in addition, sports bettors must be in an active Barstool Sportsbook state.

We have a fun showdown at Lambeau Field tonight, where it’ll be between 20-30 degrees with a slight overcast and plenty of wind. Also known as football weather. Let’s jump into some of the biggest storylines to watch out for tonight.

Is This a Derrick Henry Game?

Although he’s from Florida and played in the SEC, Titans running back Derrick Henry would not have it any other way. King Henry thrives in the cold weather as he’s that much harder to tackle. On the season, Henry is first in the NFL in carries (202), second in rushing yards (953) and second in rushing touchdowns (9).

The Packers have been abysmal against the run this season, ranking 26th in rushing yards allowed per game at 140 and 30th in run defense DVOA. To make matters worse, the Packers lost Rashan Gary for the season and will be without De’Vondre Campbell in this one.

If you think this is a nice spot for Henry to explode, not only can you bet over on his rushing prop (101.5 yards), but you can bet on several long-shot props:

Health Question Marks on Both Sides

We’re approaching the last third of the season, which means that every team is dealing with a laundry list of injuries that are crucial to monitor if you choose to wager.

For tonight’s matchup, the Packers have a ton of question marks on both sides of the ball. On offense, rookie wide receiver Romeo Doubs will miss another week with an ankle injury. Fellow rookie Christian Watson has experienced a nice breakout in his absence – we’ll see if he can continue that tonight. In addition, offensive linemen David Bakhtiari and Elgton Jenkins are both listed as questionable. The Packers have been moving pieces around their OL all season – tonight will be one of their stiffest tests yet.

Bak and Jenkins questionable with Campbell and Doubs out. Having the OL full strength against this Tennessee defensive front will be a must. pic.twitter.com/j30sJjQhUw

Conversely, the Tennessee Titans have a number of question marks on their D-line. Bud Dupree will miss tonight’s game, while superstar defensive tackle Jeffery Simmons is questionable. Even without these two last week, the Titans committed six sacks and nine tackles for a loss in last week’s victory.

For the first time all season, the Packers scored 30+ points in last week’s victory – ironically, Aaron Rodgers only attempted 20 passes all game, a season-low. The Packers were amidst a five-game losing streak, but they will try to steer their season back to prominence with another victory in tonight’s matchup.

The last time the Packers started 4-6 was in 2016. The Packers went on to win six straight in the regular season and storm on to the NFC Championship. Could we see similar magic going on here? If you like the Pack’s chances of making the postseason, you can wager on them at the Barstool Sportsbook with some enticing +305 odds.

To help in their comeback effort, the Packers will activate Randall Cobb off the IR. It’ll be his first action in 4.5 weeks. The Packers will need to lean on the passing game more in this game than they did against Dallas, as the Titans have the number 1 ranked rush defense in DVOA.

The Titans have covered the spread in seven straight contests since taking a beatdown in Buffalo on Monday Night Football in Week 2.

And head coach Mike Vrabel has thrived in these spots. Since assuming the role of head coach, Vrabel is 20-7 ATS when he is an underdog of three or more points.