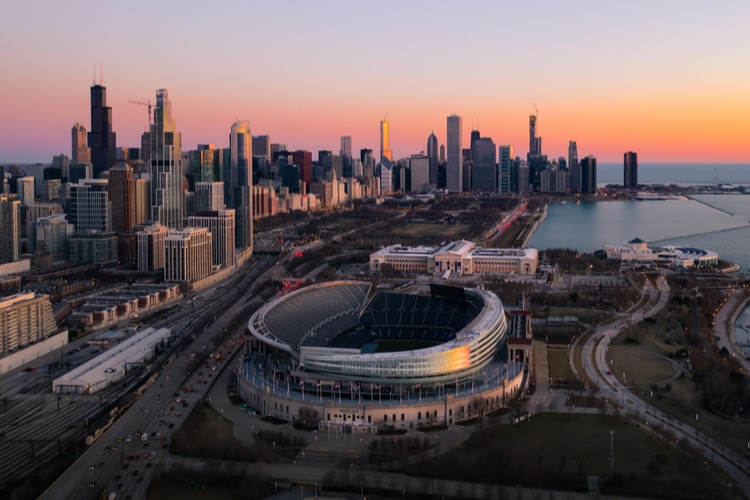 Photo by John Lupu via Shuttersock

(Note: The original version of this article has been updated with quotes from Mayor Lori Lightfoot.)

The Bears might be going all in on Arlington Park.

In a dramatic raising of the stakes with the city of Chicago and its Park District over changes it is seeking at Soldier Field, the storied NFL franchise announced Wednesday it has signed a purchase and sale agreement with Churchill Downs Inc. to acquire Arlington Park.

The 326-acre parcel of land north of the city has been used for horse racing for nearly a century. A CDI filing with the Securities and Exchange Commission Wednesday morning indicated the sale price to the Bears would be $197.2 million.

This past weekend saw the final slate of horse races for the 94th season at Arlington, whose cantilevered roof spanning the backstretch makes it one of the world’s most instantly recognizable venues for the sport of kings. Arlington Park did not submit a race schedule for the 2022 season by the Aug. 1 deadline, and race dates for next year were awarded last Thursday to Hawthorne Race Course and FanDuel Sportsbook and Horse Racing.

The Athletic was the first to report Tuesday night the purchase agreement was in place. At a media availability Wednesday, Chicago Mayor Lori Lightfoot expressed hope the team would resume negotiations with the city, but she said the Bears would have to be upfront about what they want.

“Yesterday was not unexpected. I had a very cordial conversation [Tuesday] night with [Bears chairman] George McCaskey. He called to inform me of their purchase of the property out in Arlington. … As a mayor, as a Bears fan, I’m going to continue to do what I can to keep them here in the city of Chicago, and I don’t think that door has closed by any means, but I also need to make sure that first and foremost I’m doing what’s best for the taxpayers of the city.

“The Bears cut a deal with former Mayor Richard Daley 20-plus years ago. It’s clearly a deal they don’t believe now works for them, but I’ve got to know what their specific issues are, and they have to come to the table.”

“We are excited to have executed a Purchase and Sale Agreement (PSA) for the Arlington Park property,” said Bears President and CEO Ted Phillips. “We are grateful to Churchill Downs Incorporated for their efforts to reach this point. We also appreciate the support of Mayor Tom Hayes and the Village of Arlington Heights. Finalizing the PSA was the critical next step in continuing our exploration of the property and its potential. Much work remains to be completed, including working closely with the Village of Arlington Heights and surrounding communities, before we can close on this transaction. Our goal is to chart a path forward that allows our team to thrive on the field, Chicagoland to prosper from this endeavor, and the Bears organization to be ensured a strong future. We will never stop working toward delivering Bears fans the very best experience. We will continue to provide updates on our progress at the appropriate time.”

“This has been an extraordinarily competitive bid process,” said Churchill Downs Incorporated CEO Bill Carstanjen. “Congratulations to the Chicago Bears for their professionalism and perseverance. It is clear they are committed to an exciting vision for their team and their fans. We wish them the greatest success and are excited for the opportunity this brings to the Village of Arlington Heights and the future economic development of this unique property.”

“I could not be more excited about the news that the Chicago Bears have signed a Purchase and Sale Agreement to buy the Arlington Park property in our community,” said Arlington Heights Mayor Tom Hayes. “My goal for any redevelopment has always been to put this prime piece of real estate to its highest and best use, and I can’t think of a higher and better use than this one. There is a long way to go as we begin this journey, and many issues for the community to discuss, but the Village is committed to working with the Bears organization and all stakeholders to explore this opportunity for Arlington Heights and the northwest suburban region.”

The Bears surprised many in June by bidding on the Arlington Park property, but recent reports have shown the organization at odds with the Chicago Park District — which runs Soldier Field — regarding upkeep and improvements, most notably the creation of a sports betting lounge at the stadium. The Bears made BetRivers their official sportsbook partner in June and Rivers Casino — in which Churchill Downs has a majority stake via a $407 million deal in March 2019 — their official casino partner through a deal with Rush Street Interactive.

Since launching sports betting in March 2020, Illinois has quickly positioned itself as a top-three market nationally for handle, setting a high-water mark of $633.6 million this past March. It also finished second ahead of Nevada and behind only New Jersey in both April and May this year. Illinois is also one of only four states to surpass $5 billion in handle in the post-PASPA era that dates back to May 2018.

The Bears’ lease at Soldier Field runs through 2033, though the Chicago Tribune reported the team could break the contract for an estimated $84 million in 2026.

“If they’re determined to move, that’s one thing,” said Lightfoot, who maintained her stance about holding the Bears to the terms of their current lease. “But I know they have a contract with us that runs through 2033, and as I said to McCaskey, ‘I’m not about breaking that contract,’ and if they want out of that contract, they’re going to have to pay us for it.”

Rush Street Interactive CEO and co-founder Neil Bluhm, a Chicago native, could also be considering applying for the casino license for downtown Chicago. If the Bears actually move to Arlington Heights, the Soldier Field property could become a potential casino venue — though the machinations required to bring gambling there would likely be Herculean in scope, even by Chicago standards.

The city is currently accepting requests for proposal with hopes of opening a downtown casino in 2025. It extended the deadline last month to Oct. 29 due to the lukewarm response from gaming companies given the expectations Lightfoot has set.

In addition to the challenges the first-term mayor faces in wooing potential casino suitors, even after she successfully won reduction of some of the downtown casino tax rates, sportsbooks are angling to establish a retail presence in Chicago.

DraftKings has been moving toward building a venue at iconic Wrigley Field after signing a deal with the Cubs in September 2020, with the team winning a key approval from the city’s Commission on Chicago Landmarks last month. A city alderman’s proposed ordinance to lift the “home rule” ban to allow sportsbooks in the city had been re-routed to the rules committee in July.

Churchill Downs will still be a player in Illinois

When it announced in February it was selling Arlington Park, more than 20 years after acquiring it in June 2000 in a $72 million stock purchase from Richard Duchossois, Churchill made clear it had no interest selling to a party that would continue horse racing. Still, at least one party that wanted to continue racing and included former Arlington Park President Roy Arnold bid for the property, with a second group reportedly doing likewise.

CDI was more interested, however, in protecting its investment in Rivers, which is 12 miles from the track. The state’s flagship casino has generated more than one-third ($288.3 million) of the state’s casino revenue in 2021 and nearly half ($65.5 million) of the state’s $137.4 million in gaming tax receipts through the first eight months of the year.

Its decision to purchase the stake in Rivers came shortly before Illinois Gov. JB Pritzker signed a massive gaming expansion bill into law in June 2019 that also legalized sports betting. It gave Churchill the ability to turn Arlington Park into a racino — something for which it intensely lobbied. The state’s other two tracks (Hawthorne Race Course and FanDuel Sportsbook and Horse Racing) are converting their properties into racinos.

CDI stunned nearly everyone in August 2019, however, when it opted not to seek such a license. Carstanjen explained at the time that it was because the “effective tax rate” was nearly 20% higher than other Chicagoland casinos, due to the contributions it would have to make to the thoroughbred purse account.

CDI and RSI have also partnered in a bid for the casino license in Waukegan — one of six new sites granted a casino license in Pritzker’s bill — near the Illinois-Wisconsin state line and less than an hour from the Des Plaines casino. The CDI-RSI joint bid, one of three finalists, is to be presented before the Illinois Gaming Board Oct. 13 in a specially convened meeting by the state agency.

Won’t someone think of the horses?

Though its logo still features the iconic twin spires of its headquarters, and Louisville-based Churchill Downs is still the site of the Kentucky Derby — horse racing’s first jewel of the Triple Crown — the decision to sell Arlington Park is another clear indication Churchill Downs wants to be considered a gaming company first and horse racing business second.

People in the horse racing industry have noted that has been the case for years, as Arlington Park is the latest horse racing property Churchill Downs acquired and systematically let wither on the vine. It did so previously at Hollywood Park in California and Calder Race Course in Florida while expanding its gaming portfolio to include what are now 16 casinos and historical racing machine sites nationwide.

CDI’s decision not to purse the racino license for Arlington Park was a signal the already struggling horse racing industry in Illinois was in further jeopardy. Churchill incurred the wrath of both the industry and state politicians for its backtracking on the racino, with acrimony on clear display from the Illinois Thoroughbred Horsemen’s Association during sometimes contentious negotiations for live racing at Arlington Park. Though the two sides did eventually sign a two-year deal in June 2020 to cover racing for 2020 and 2021, it also came nearly six months after state law required them to do so.

With each move by CDI that increased the likelihood 2021 would be the last season of racing, both indifference and criticism grew. The Mr. D Stakes, renamed since the signature Arlington Million race did not offer a seven-figure payout this year, drew less than 7,500 people in August — barely more than 20% of the track’s 35,000 capacity.

While the ITHA would be expected to lob criticisms at Churchill given how its horsemen’s livelihoods have been affected, some of the most withering remarks came from recently appointed Racing Board Commissioner Alan Henry. A former journalist who covered horse racing and was appointed to the board in February, Henry made it a point to lambaste what he perceived as CDI’s greed and avarice during practically every IRB meeting starting with his first one in March. 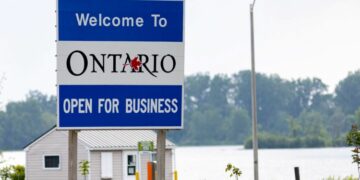 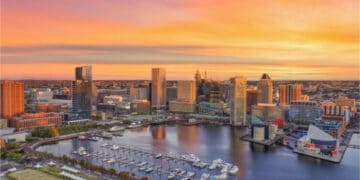