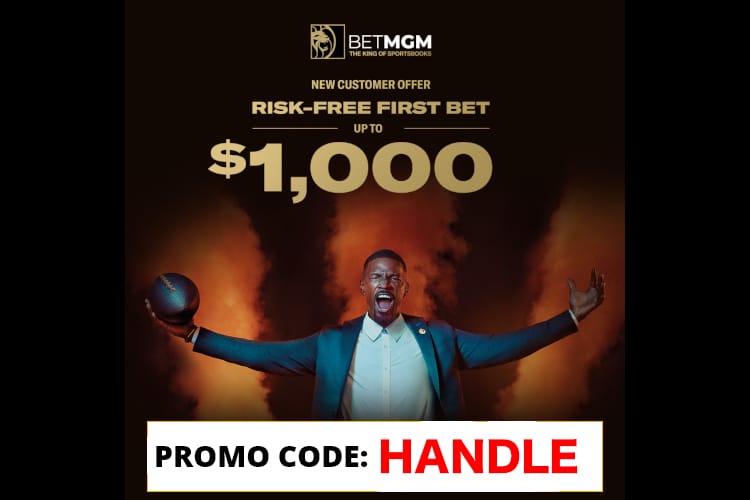 `October is officially upon us, meaning college football season is in full swing. The slate on tap for Week 5 is one of the best we’ve seen to date, featuring five Top-25 matchups across a total of 55 games on Saturday alone. New users at BetMGM Sportsbook can get in on all of the action with a risk-free first bet worth up to $1,000 when they register using BetMGM bonus code HANDLE.

That’s right, all new users who have yet to sign up for an account with BetMGM Sportsbook can claim an exclusive welcome bonus using BetMGM bonus code HANDLE. Place your first bet with the site up to $1,000 and if things don’t go your way – don’t worry! BetMGM will cover your stake with a 100% refund in the form of free bet credits. We’ll break down all of the details below.

Claiming this offer is a simple three-step process:

If your first bet with BetMGM is a winner, congratulations! You’ll get paid out in cash per usual and the promotions ends there. But say that bet is a bust, BetMGM will reimburse 100% of your initial stake, up to $1,000, in the form of free bet credits.

All eligible users will receive their free bet credits within 24 hours and must use them within 7 days or they will expire. Any amount lost over $50 will be paid back in increments of 20%, meaning a player that lost $1,000 would get back five (5) separate free bets worth $200 each.

It is worth noting that free bet credits at BetMGM Sportsbook only pay out the winnings on any bets won, never the stake. For example, if a user placed a $20 free bet on a selection at +100 odds and won, they would only get back $20 in winnings. If the same $20 bet was placed and won using real cash, the player would get back their initial $20 stake plus the $20 in winnings, totaling $40.

This week’s college football board is a worthy one to say the least, featuring a bevy of ranked matchups peppered throughout a loaded card of more than 50 contests. The early portion of Week 5 will begin at noon over on the east coast, with games out west beginning as late as 11:00pm ET later on in the night. With enough action on tap to make the average viewer’s head spin, we broke down our top three matchups of Week 5. Let’s get into it.

The first of Saturday’s five Top-25 clashes will take place at high noon at Vaught Hemingway Stadium in Oxford, Mississippi between the #7 Kentucky Wildcats and #14 Ole Miss Rebels. Both sides couldn’t ask for better starts to begin the new campaign, as they enter this meeting boasting a pair of respective 4-0 records.

The Wildcats and the Rebels last met during the 2020 regular season, nearly two years to the exact date of Saturday’s grudge match. Ole Miss edged out Kentucky in an absolute thriller that night, winning 42-41 on the road in Lexington. Wildcats HC Mark Stoops will now look to exact his revenge over third-year Rebels HC Lane Kiffin and company.

Many might be thrown off seeing #7 Kentucky entering this matchup garnering an entire touchdown on the spread against a team ranking seven spots lower in the Top-25, and for good reason. However it is worth noting that Mark Stoops’ teams strive as the underdog. The Wildcats have won outright in 6 of their previous 13 games as the underdog – four of which occurred as a 6-point dog or higher. Dating back to 2016, Kentucky is a stellar 23-15 against the spread when receiving points, good for a 60.5% hit rate.

The main event on Saturday afternoon will feature none other than the #2 Alabama Crimson Tide (4-0) heading into Fayetteville to take on the #20 Arkansas Razorbacks (3-1). Sam Pittman’s bunch will certainly have their hands full at home as they look to bounce back from last week’s 23-21 loss to Texas A&M, the program’s first of the 2022 season.

As for Alabama HC Nick Saban and company, they’ll look to avoid another landmine on the road and move past the Razorbacks to 5-0. Unfortunately for Alabama fans and bettors, this one isn’t going to be easy – as it never is when the Tide plays away from home. In Alabama’s last five true road games, the Tide has closed as a 14-point favorite or higher each time. Four of those five games were decided by three points or less, with Alabama even suffering an outright loss to Texas A&M in 2021.

Alabama will most likely figure out a way to escape with a win on Saturday, but should struggle in doing so. Expect the Razorbacks to build off their raucous crowd and keep the Tide in check all afternoon. This one has classic written all over it – take the points.

Headlining the latter portion of Saturday’s slate is a marquee matchup between the #10 NC State Wolfpack and the #5 Clemson Tigers. Both teams enter this high-stakes ACC battle undefeated at 4-0 on the season, vying to get a leg up on one another in the conference standings.

NC State took down a much weaker Clemson unit during Week 4 of last season, winning outright at home as 10-point underdogs, 27-21. Tigers HC Dabo Swinney will attempt to get the last laugh as Clemson welcomes the Wolfpack into Memorial Stadium for the first time since 2018. Clemson won that game, 41-7.

After narrowly escaping a tough road game at Wake Forest last weekend, 51-45, the Tigers once again open as 7-point favorites against a worthy conference foe. Clemson failed to cover the spread in its win over WF, and is now 1-3 ATS overall despite sitting at a perfect 4-0 straight up. With that being said, all signs point to Clemson returning the favor after last year’s upset by the Pack, who looked like a completely different team away from home in their nail-biting Week 1 victory at East Carolina.

Bet “Risk-Free” on any sport with BetMGM

Not the biggest college football fan? No worries! New users can claim their $1K risk-free bet on any sport or event taking place this weekend over at BetMGM Sportsbook! Be sure to enter BetMGM bonus code HANDLE during sign-up and get started today! Here is what’s on tap: