by Eric Raskin
in Promotions 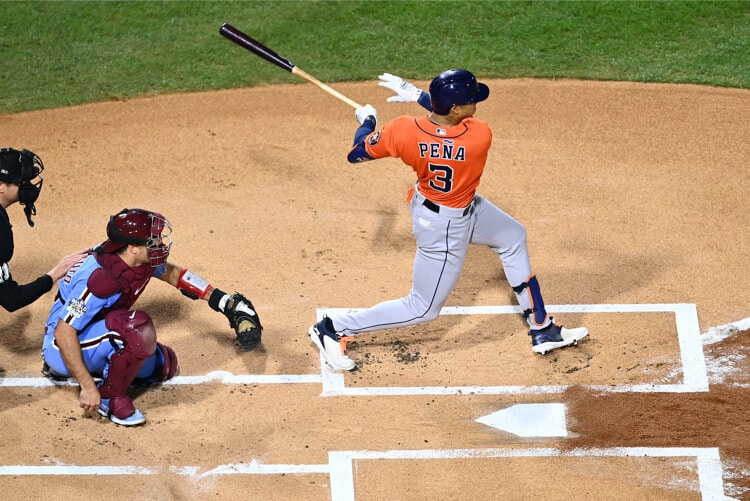 After a trio of games at Citizens Bank Park in Philadelphia delivered unexpected and at times historic outcomes — a record-tying five homers by the Phillies in Game 3, the second-ever World Series no-hitter in Game 4, and, at long last, a World Series win for Justin Verlander — the teams return to Houston to crown a champion.

New sports bettors at BetMGM Sportsbook can claim a special welcome offer that entails a risk-free bet up to $1,000. All you’ll need to do is use our exclusive Sports Handle BetMGM code HANDLETOP.

The Astros are looking to close it out behind lefty Framber Valdez, who more or less shut down the Phils’ bats in Game 2. He allowed one run and struck out nine before departing in the seventh inning of what would end up a 5-2 win. The southpaw on the mound means Phillies coach Rob Thomson will likely start Matt Vierling in centerfield instead of Brandon Marsh and will plug in Edmundo Sosa at shortstop while struggling rookie Bryson Stott moves to the bench.

Zack Wheeler gets the call for the underdog Phils with their season on the line, hoping to bring his full arsenal after a week of rest since getting knocked around for four earned runs in five innings in Game 2. Prior to that game, the veteran right-hander had a 1.78 postseason ERA and had gone at least six full innings in each of his four starts.

The Phillies have no margin for error as they step on the field at Minute Maid Park down three games to two. But there is some wiggle room for new customers looking to take advantage of BetMGM’s risk-free bet. So continue reading, and we’ll cover the terms and conditions you need to know as well as give you a preview of the must-watch game.

Joining and creating an account on BetMGM Sportsbook could not be easier. Below, we provide a step-by-step process to ensure you receive your welcome offer.

But please note you must be 21 years or older to be eligible to join BetMGM Sportsbook. If you already have an account on BetMGM, you will not be able to qualify for this offer. In addition, you must reside or be located in one of the following states:

If you check those boxes, here’s what you can do to claim your bonus:

The risk-free bet promotion will kick in if your initial bet loses. BetMGM Sportsbook will compensate your account with a full refund of up to $1,000 in free bet credits.

If your initial wager is a loss of $50 or more, your free bets will appear in your account in five increments, each worth 20% of your lost stake.

Upon issuance, you will have seven days to use your free bets until they expire. In addition, winning free bet tickets will not include the initial stake — you will just be paid out in winnings.

To win the series, the Astros are now -650 favorites at BetMGM, while the two-game parlay that brings a parade to Philadelphia is priced at +450. But before the Phils can think about such goals, they need to get through Saturday’s showdown and force a Game 7. They’re +120 on the moneyline to do just that. On the run line, bettors can take Houston -1.5 at +150 or Philadelphia +1.5 at -185.

A pitcher’s duel is potentially in the offing, with the total runs set at just 7, with -120 juice on the under (and even money on the over). The final score landed on exactly 7 when Framber and Wheeler tangled in Game 2, and only one game in this series — Game 1 — has seen more than 7 runs tallied.

World Series MVP betting is always a fun option. Not surprisingly, given the score in the series, the top candidates mostly wear Astros orange.

Rookie Jeremy Pena, the ALCS MVP, is the clear favorite to double up on postseason awards at +100. The 25-year-old hit a pivotal solo homer in Thursday’s dramatic 3-2 Game 5 victory and is leading all World Series players with eight hits and a .381 average.

Houston third baseman Alex Bregman is next at +700, followed by Phillies superstar and NLCS MVP Bryce Harper at +750. Neither has spectacular stats in this series, but each has homered once and either is capable of a massive game that jolts the odds board.

If he delivers another outstanding pitching performance, Valdez is live at +1000 should the Astros close out the World Series on Saturday. Cristian Javier, who threw the first six innings of the Game 4 no-hitter, is at +1400 and could get a chance to pad his stats if there’s a Game 7. Also priced at +1400 are a pair of Kyles — Tucker and Schwarber, the only players in the series who’ve hit two homers.

Want a wild longshot? Phillies pitcher Ranger Suarez is +5000 for MVP. He tossed five scoreless innings in Game 3 and provided a critical 2/3 of an inning in relief in Game 1, both Phillies wins. The Venezuelan lefty would likely get the start if there’s a Game 7 on Sunday. So it’s effectively a parlay: The Phillies win Game 6, they also win Game 7 behind a strong start from Suarez, and no single position player stands out across those two games. At 50/1, it’s not a bad parlay to consider.