Claim $50 free plus a risk-free first bet up to $1K for Dolphins-Bengals with BetMGM. Use bonus code HANDLE50. 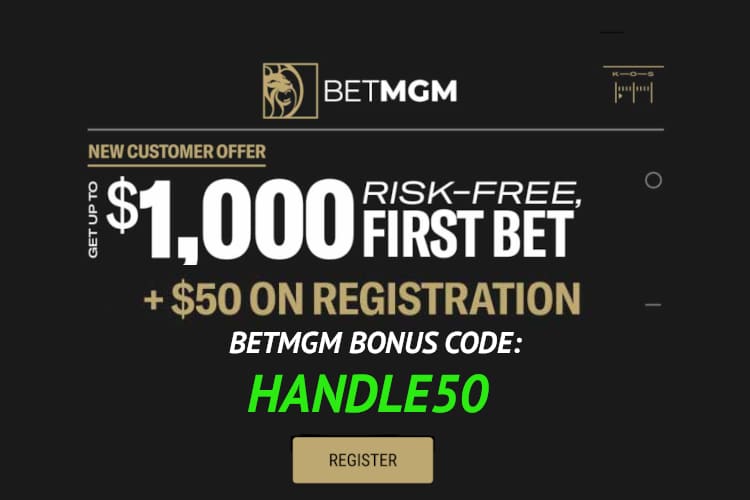 Thursday Night Football is set for its fourth rendition of the 2022 regular season, this time headlined by an exciting matchup between the undefeated Miami Dolphins and defending AFC Champion Cincinnati Bengals. New users at BetMGM Sportsbook can take advantage of an exclusive two-part welcome bonus that includes both a free $50 on registration AND a risk-free bet worth up to $1,000 when they sign up using BetMGM bonus code HANDLE50.

BetMGM Sportsbook is treating all first-time users to the ultimate welcome package. Upon signing up for a brand new account using our BetMGM bonus code HANDLE50, new users will receive a $50 free bet on the house before even making a deposit. After that, BetMGM will also allow you to place a risk-free first bet up to $1,000 and if it doesn’t work out, they’ll refund your entire stake in the form of free bet credits. The value is through the roof with this one.

Claiming your welcome bonus is a simple, stress-free process:

If your first bet is a bust – don’t sweat it! BetMGM Sportsbook will reimburse your entire stake up to $1,000 in the form of free bet credits. Eligible users will receive their free bets within 24 hours of bet settlement and must use them within 7 days or they will unfortunately expire. If your losing wager is greater than $50, all free bets will be distributed in increments of 20%. In this case, a player that lost $100 would get back five (5) free bets worth $20 apiece.

It’s also worth noting that all free bet credits at BetMGM only pay out the winnings, never the stake on any wagers won. For example, if a player put down $20 in cash on a selection at +100 odds and won, they would get back their initial $20 stake plus the $20 in winnings, totaling $40. If the same bet was won using a $20 free bet, the player would only get back the $20 in winnings.

Make sure to place your risk-free first bet up to $1,000 before locking in your $50 free bet. If your $50 free bet is placed on any wagers, it will disqualify your next bet from the risk-free promotion. In order to consider it risk-free, the bet must be your first cash bet ever placed on the account.

Today is the final day to take advantage of our exclusive BetMGM bonus code HANDLE50. The offer expires 9/29 at 11:59pm ET.

This week’s Thursday Night Football matchup is a juicy one to say the least, featuring one of the NFL‘s two remaining undefeated teams in the Miami Dolphins (3-0) heading into Ohio to take on Joe Burrow and the Cincinnati Bengals (1-2). As Miami looks to extend its lead over the rest of the pack and advance to 4-0, Cincinnati will look to stay afloat and get back to .500 after a couple of underwhelming performances to begin the new campaign.

BetMGM Sportsbook currently has the Bengals listed as a 3.5-point favorite in tonight’s matchup, while bettors can grab the streaking Dolphins at +155 on the moneyline. For player props, alternate lines, or other ways to wager on Thursday Night Football, head over to BetMGM Sportsbook and check out its extensive menu of betting options for Dolphins vs Bengals. Let’s get into the participants:

As briefly mentioned above, Dolphins HC Mike McDaniel and his squad will enter this game as one of the two remaining undefeated teams in the National Football League. Getting to 3-0 was no easy task for Miami to say the least, as it took a pair of nail-biting victories over the Baltimore Ravens in Week 2 and more recently the Buffalo Bills in Week 3. Despite getting to this point unscathed, Thursday’s trip to Cincinnati could spell the end for Miami’s perfect start.

The fact of the matter is that Miami’s defense was on the field for a whopping 90 (!!!) plays on Sunday against Buffalo’s dynamic offense, allowing 497 total yards while locking up their biggest win of the season. For context, just one other NFL team ran more than 80 plays in Week 3 (Arizona). Game temperatures were around 88 degrees at the time of kickoff and reportedly felt as high as 99 degrees throughout the entire afternoon, including in the fourth quarter. Riding out such an emotional win in the blazing Florida heat is going to take a toll on any roster, especially one that is playing on short rest heading into the following week.

With that being said, oddsmakers are clearly hip to the fact that Miami could be heading into Cincinnati on Thursday night with a little less pep in their step, currently listed as a 3.5-point underdog despite taking down the Super Bowl favorites in Week 3. Some may see this line as a total sign of disrespect, while I look at it as Miami’s toughest game over the next five weeks (at NYJ, vs MIN, vs PIT, at DET, at CHI). All signs point to Cincinnati slowing down the train and pulling back within .500 for the first time on the young season.

The Dolphins are currently +155 on the moneyline with BetMGM.

As for Cincinnati and fourth-year head man Zac Taylor, they’re still looking to shake off the rust from a potential AFC Championship hangover. The Bengals dropped a pair of close games right out of the gate to the Pittsburgh Steelers and Dallas Cowboys before picking up their first win of the season in Week 3 on the road over the lowly New York Jets. Following a fairly easy trouncing of Gang Green on a crispy Fall Sunday afternoon in New Jersey, Cincy now finds itself in the perfect position to get the season back on track.

As mentioned above, Cincinnati holds a massive advantage in the sense that Miami will be coming to town on short rest following the franchise’s biggest win in quite some time. Not only does that type of game take a major emotional toll on the players, but also physical – and having just three days to recover in between certainly won’t help Miami’s chances on Thursday night.

And for those wondering how this type of matchup fares historically, the last time a team 3-0 or better closed as at least a 3.5-point underdog against a team with a losing record occurred during the 2018 season. What happened then? The 3-0 Miami Dolphins went into New England as a 6.5-point underdog and lost 38-7.

Ohio bettors will unfortunately have to wait until January 1st, 2023 to begin legally wagering on their hometown Bengals.

Not interested in betting on this exciting Thursday Night tilt? No worries! New users at BetMGM can still claim this exclusive two-part welcome package by wagering on any sport or event taking place on Thursday night! Just remember to enter the NFL BetMGM bonus code HANDLE50 during registration. Here’s what’s on tap for tonight (listed odds from BetMGM):