New users can claim a risk-free bet up to $1K on any ALDS or NLDS playoff game using BetMGM bonus code HANDLETOP. 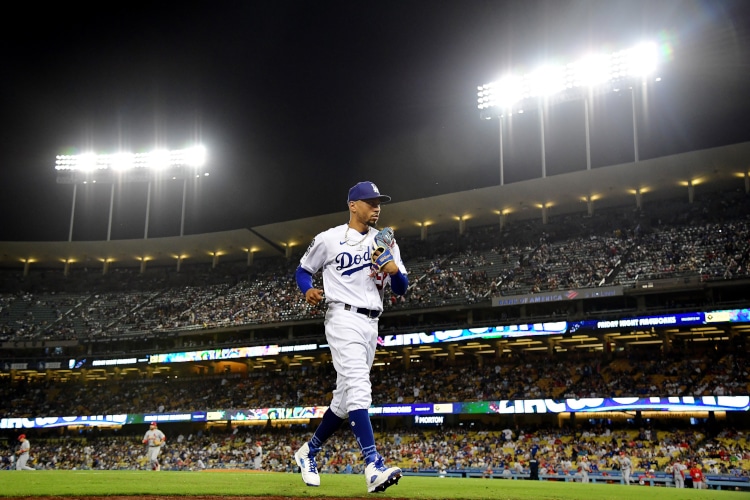 Wild Card Weekend has officially come and gone, and now just eight teams remain in Major League Baseball’s postseason gauntlet. Following three days of pure excitement, controversy, and even heartbreak for some fans in Queens, the time has come to move forward into the Divisional Round.

As the eight remaining World Series hopefuls continue their push for glory, new users at BetMGM Sportsbook can jump in on the fun with little to no stress thanks to the site’s latest welcome bonus of a risk-free first bet worth up to $1,000. Sign up using BetMGM bonus code HANDLETOP and get started before the first pitch is thrown!

Here’s the gist. If you are at least 21+ years old, located in an active BetMGM Sportsbook state at the time of wagering, and have yet to sign up for an account with the site, then you should qualify for a $1,000 risk-free first bet with BetMGM. Just be sure to enter BetMGM bonus code HANDLETOP during registration.

Follow three simple steps to ensure you claim your bonus:

From there, there are only two outcomes: that first bet wins, or it loses. If it wins, you’ll get paid out in cash per usual, and unfortunately the promotion will end right there. But on the bright side, you’re up 1-0! Now let’s say your risk-free bet is a flop – now what? BetMGM will refund all losing bettors 100% of their lost stake, up to $1,000, in the form of free bet credits.

There a few things to keep in mind regarding BetMGM free bets:

MLB Divisional Round preview with BetMGM

Round two of Major League Baseball’s postseason is set to begin this afternoon, with an attractive four-pack on tap starting at 1:07pm ET in Atlanta and ending out west in the wee hours of the night over in Los Angeles. Check out BetMGM Sportsbook for all of the best MLB playoff odds, player props, and even World Series futures – including MVP. Let’s get into the games.

The defending World Series champion Atlanta Braves will get us started in the Divisional Round as they welcome in a familiar foe in the Philadelphia Phillies to Truist Park for the first of five. These two teams previously met 19 times during the 2022 regular season, with Atlanta getting the better of Philadelphia by finishing 11-8 head-to-head.

LHP Ranger Suarez is set to start Game 1 for the Phillies, who enter this matchup with a little bit of wind in their sails after blanking the St. Louis Cardinals on the road in the Wild Card Round, two games to none. Suarez held his own against Atlanta in the regular season, posting a 3.21 ERA across five starts. This includes six strong innings of two-hit ball back on September 16th at Truist Park, and six scoreless at home against the Braves one week later on September 22nd.

Braves ace Max Fried has struggled when facing Philadelphia throughout his stellar career, owning a 4-4 record through 12 career starts against the Phillies to go along with a 3.74 ERA. Fried was winless against the Phillies in the regular season despite facing them four times, however his team went 2-2 in those games.

In this battle of southpaws, expect runs to be at an absolute premium. Both Suarez and Fried excelled during day games in 2022 – Fried was 3-1 with a 2.23 ERA over six starts, while Suarez posted a 2.81 ERA across six daytime starts of his own.

Pennsylvania bettors can sign up with BetMGM and ride the Phillies’ hot streak today! Unfortunately for those based in Georgia, sports wagering is still illegal under state law.

Up next is an AL West grudge match for the ages between the scorching-hot miracle Seattle Mariners and the reigning American League Champion Houston Astros. The Astros took care of Seattle in the regular season en route to the team’s fifth AL West title in six seasons, boasting a 12-7 head-to-head record coming into this high-stakes ALDS matchup.

Astros RHP Justin Verlander seemingly only gets better with age, posting a career-best 1.75 ERA to go along with an eye-popping 18-4 record in his age 39 season. Verlander has been downright un-hittable at home in 2022, posting a 10-1 record at Minute Maid Park with a 1.64 ERA, which is somehow even lower than his mind-boggling regular season mark. JV also shined during day games, going 8-1 with a 1.63 ERA across 11 starts.

With that being said, Mariners RHP Logan Gilbert will surely have his work cut out for him this afternoon as he attempts to fend off an Astros lineup that posted 4.55 runs per game in the regular season, good for 8th best in all of baseball. Gilbert held his own against Houston despite this, finishing the year 2-1 against the Astros with a strong 2.52 ERA over four starts. If Seattle’s bats can bring the same intensity as they did back on May 27th when they tagged Verlander for six earned runs at T-Mobile Park, this one could end up being anyone’s ballgame.

Headlining the primetime window of tonight’s slate is none other than Aaron Judge and the New York Yankees playing host to the Cleveland Guardians. The Bronx Bombers wiped the floor with Cleveland during the 2022 regular season, finishing 5-1 overall including a clean sweep at Yankee Stadium.

RHP Cal Quantrill will hope for a better result this time around, as he was the starting pitcher in one of Cleveland’s three losses at Yankee Stadium back in April. Quantrill definitely delivered on his end of the deal in that game, serving up 6.1 quality innings while allowing just three earned runs. Following a go-ahead homerun in the 8th inning by catcher Austin Hedges, Cleveland closer Emmanuel Clase failed to lock up the save and ended up blowing the game to lose 5-4.

RHP Gerrit Cole has enjoyed facing Cleveland throughout his 10-year career, flexing a 3.15 ERA and 5-2 overall record over eight career starts. Cole was especially exceptional against the Guardians in 2022, limiting Cleveland’s bats to just two earned runs across 12.2 innings pitched during two fairly easy blowout victories. If New York wishes to return to the ALCS for the first time since 2019, it will require a big time performance from their ace.

Bettors located in New York and New Jersey can back the Bombers to advance at BetMGM, while those in Ohio can begin legally wagering on sports once the state launches its iGaming market on January 1, 2023.

Rounding out Tuesday’s loaded schedule is our third meeting between division rivals, this time featuring Juan Soto and the San Diego Padres taking on Mookie Betts and the mighty Los Angeles Dodgers. This series has been extremely one-sided as of late, with Los Angeles going 14-5 against San Diego in 2022, while also winning 23 of their last 28 meetings.

Padres RHP Mike Clevinger has also not faired very well against the Dodgers in his career. Clevinger is 0-2 against LA in three career starts, but has gotten absolutely tagged for 16 hits and 14 earned runs over just 13 innings pitched. All three starts occurred over the last two months, and all three have resulted in Clevinger lasting 5 innings or less and giving up at least four runs in each.

To make matters even worse, San Diego’s bats will be going up against LHP Julio Urias, who leads Major League Baseball in regular season wins over the last two seasons with 37. Furthermore, Urias has absolutely feasted when facing the Padres in his career, owning a 6-1 overall record, 2.19 ERA, and 59 strikeouts across 61.2 career innings against San Diego. In the month of September 2022 alone, Urias faced the Padres three times, with Los Angeles coming out on top in all three contests. But hey, after San Diego managed to tag Max Scherzer for seven runs in the Wild Card Round, anything is possible, right?

Fans and bettors in California will unfortunately be forced to wait until the upcoming November election to determine their state’s legal sports betting fate.

BetMGM Sportsbook is offering a very special edition of its daily Lion’s Boost promotional offering for Game 1 of the American League Division Series between the Cleveland Guardians and New York Yankees. Previously available at +170, BetMGM is offering users in select states the Cleveland Guardians to put up 5+ runs at +240 odds! Register today using the BetMGM sign up bonus code HANDLETOP to claim your risk-free bet, and then your Lion’s Boost.