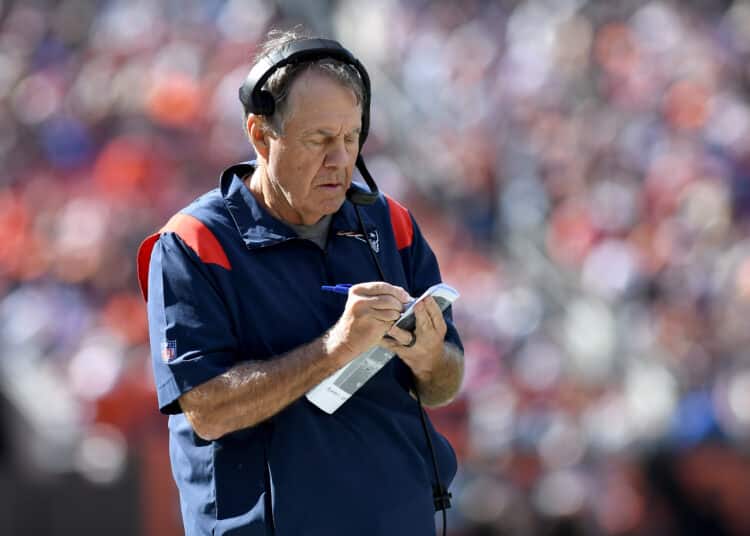 Week 7 of the NFL season is nearing its end, with an interesting Monday Night Football matchup on tap between the 2-4 Chicago Bears and Bill Belichick’s 3-3 New England Patriots. As Belichick attempts to pass Bears legend George Halas on the NFL’s all-time wins list, new users at BetMGM Sportsbook can get in on the action with a special two-part welcome bonus. Claim $50 free right off the bat, and follow that up with a risk-free first bet worth up to $1,000 when you sign up for a new account with the use of BetMGM bonus code SHNEWS50.

That’s right, BetMGM Sportsbook is stepping up big time with its latest new user welcome bonus. The offer consists of $50 free on registration followed by a risk-free sports betting opportunity up to $1,000 and can be claimed using the BetMGM bonus code SHNEWS50.

If your first bet with BetMGM settles as a loss, the site will have you covered with a 100% refund in the form of free bet credits. Eligible users will receive their free bets within 24 hours of settlement and must use them within 7 days or they will expire.

Any amount over $50 that is lost during this promotion will be reimbursed in increments of 20%, meaning a $1,000 risk-free bet that loses would return five separate free bets worth $200 apiece. Keep in mind that if you place a wager using a free bet credit and it wins, you will only take home the bet’s winnings – the original free bet stake is not returned to the player regardless of the outcome.

Important: Lastly, make sure you do not use your initial $50 free bet bonus until after you’ve locked in your risk-free first bet in cash. If the $50 free bet is used before any cash wager is placed, it will cancel out the risk-free portion of the promotion.

The Chicago Bears will enter Monday Night’s showdown in Foxboro fresh off of a crushing loss during last week’s rendition of Thursday Night Football. Chicago out-gained the Washington Commanders with 391 total yards to Washington’s 214, however ended up losing that game on its final play, 12-7. Chicago failed to score from inside the 5-yard line three times in the loss, once via a deflected interception and twice after failing to convert on 4th down.

Now sitting at 2-4 overall, all hope seems to be lost for HC Matt Eberflus and company. Things are certainly not going to get any easier tonight as they head into Gillette Stadium to face a red-hot New England Patriots team as 9-point underdogs. They’ll attempt to pull off the upset with a slight rest advantage, which hasn’t proven to be a major boost for Chicago as of late: over the last five seasons, Chicago is just 5-10 ATS when playing with extra rest. On the contrary, Bill Belichick’s Patriots are 9-5 ATS when faced with a rest disadvantage over the same timeframe.

If there is one bright spot to pick out on the Bears’ resume this season, it is undoubtably the team’s ground game. Chicago is tied for the 4th-best mark in the NFL with 5.2 YPC, ranks 5th in total rushing yards, and clocks in with the 5th-most carries of 20+ yards this season (7). The good news for them? New England’s run defense has been a bit leaky to say the least, currently ranking 26th in the NFL while allowing 4.7 yards per carry in 2022.

This isn’t just any ordinary Monday Night Football matchup for the New England Patriots and HC Bill Belichick. With a win on Monday night, Belichick would officially pass Bears legend George Halas on the NFL’s all-time head-coaching wins list with 325 (regular season and postseason). The Patriots are -400 on the moneyline with BetMGM Sportsbook… so it seems the bookmakers like our chances of witnessing history tonight.

Belichick will attempt to capture this historic win led by second-year quarterback Mac Jones, who is set to return from his ankle injury tonight after missing each of the last three contests. New England hasn’t really missed a beat in Jones’ absence, going 2-1 SU and 3-0 ATS over that span. After a pair of dominating wins over the Detroit Lions at home (29-0) and the Cleveland Browns on the road (38-15), Jones will once again take over after starting the season 1-2 overall.

Surely there will be some rust involved for Jones and his offense as he works back into the fold, similar to what we saw from Dak Prescott and the Dallas Cowboys on Sunday, who failed to top 200 total yards in Prescott’s return from a lengthy injury. Typically, this would make the 9-point spread seem a bit egregious, however Jones has excelled in this spot throughout his brief career: Jones is 5-0 SU and 4-1 ATS in starts in which New England closed as a 7-point favorite or higher.

If Bears vs Patriots on Monday Night Football isn’t looking particularly appetizing, feel free to check out the hoist of other sporting events taking place tonight, all listed on BetMGM Sportsbook! Just remember to sign up using the BetMGM bonus code SHNEWS50 and take a stab with any of the games on tonight’s schedule, which includes eight action-packed NBA games and a six-pack of NHL matchups!