Undefeated Eagles favored in rematch with Commanders, and new BetMGM bettors can cash in

by Gary Rotstein
in Promotions 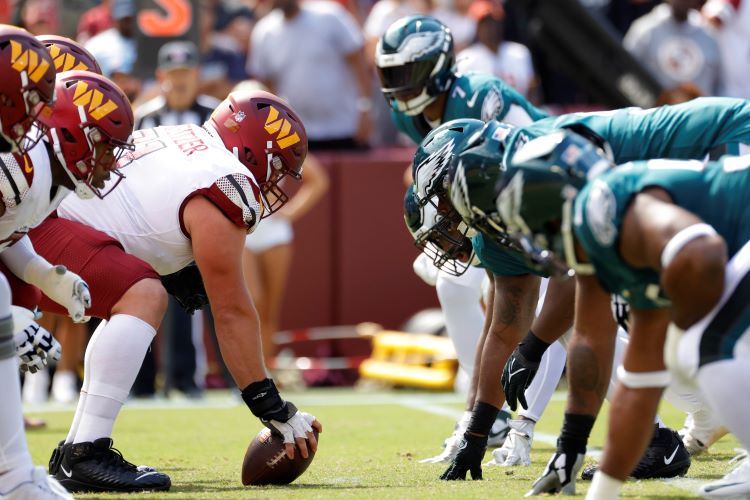 Anyone betting the Philadelphia Eagles on the moneyline every game this year would be much wealthier than when the season started. That’s what happens when a team goes on an eight-game winning streak.

And while the heavy odds favoring the Eagles over the Washington Commanders on Monday Night Football may limit just how much profit potential exists, BetMGM has a generous offer on the game for new bettors, in the form of a risk-free bet of up to $1,000 for newcomers to the site.

Whether first-time bettors play it safe and take Philadelphia or look to cash in big and get four times their stake back on a Commanders upset — or make any other of the many bets available on the game, including BetMGM’s point spread favoring the Eagles by 11 — they can do so with a form of insurance if they lose.

Any betting only adds to the interest in joining a national TV audience on ESPN watching the NFC East rivals play at Lincoln Financial Field. It’s a rematch of a Week 3 meeting in which Philadelphia dominated play on both sides of the line of scrimmage and won 24-8. It was an early sign of just how strong this 8-0 Eagles team would be in unexpectedly becoming the favorite to win the NFC, while the Commanders have regrouped since then and stand on the edge of wild card contention at 4-5.

More on the game is below, but first, key sports betting information related to the BetMGM offer.

BetMGM is one of the most heavily used football betting sites across the nation, and fittingly, it has one of the top offers for bettors new to the site. Its $1,000 Risk-Free First Bet awards bet credits up to that amount for those who lose on their first wager. To take advantage of it, customers 21 or older should register by using the leading BetMGM bonus code HANDLETOP to access the promotion.

Those who haven’t wagered on BetMGM before in one of the many legal states in which it operates should get started by clicking this link. If you happen to see a bonus code field pop up at any point, make sure to enter the BetMGM bonus code HANDLETOP.

After completing the registration process, you trigger the bonus offer by funding your new account with a deposit of $10 or more. From there, make a bet of up to $1,000 on Commanders-Eagles. If the bet wins, you’re gold — just as with any bet made, your winnings immediately show up in your account and the bonus offer becomes a moot point. The just-as-good news, though, is you’re not necessarily a loser even if you got that first bet wrong.

What if my risk-free bet loses?

As part of this exclusive promotion, the BetMGM will cover the lost stake of that first wager with a 100% refund in the form of free bet credits. All eligible players will receive their reimbursement within 24 hours and will have a seven-day window to make use of the bonus bets before they are no longer available.

If your lost stake is more than $50, BetMGM will divide your free bets into five separate tokens, each one equal to 20% of the amount you lost. When wagering your free bets, please note that the value of the free bet itself won’t be included in any winnings you take home.

With that insurance in your back pocket, this would be the right time for anyone thinking of signing up for a sportsbook account to do so with BetMGM before Monday Night Football kicks off. Even better, if you don’t see any wagering odds you like for tonight’s game, the same $1,000 risk-free offer is available for now for any other BetMGM betting option picked by newcomers.

In addition to showing few shortcomings in rolling to the franchise’s best start ever to a season, Philadelphia has had plenty of rest since beating the Houston Texans 29-17 on Thursday, Nov. 3. Washington, meanwhile, lost to the Minnesota Vikings a week ago, 20-17, to end a streak of three consecutive wins over the Chicago Bears, Green Bay Packers, and Indianapolis Colts.

The Eagles are in the league’s top five in many categories both offensively and defensively, including scoring 28.1 points per game with MVP candidate Jalen Hurts equally dangerous with his arm or legs. One of the best stats of all, which may not show up at first glance, is a +15 turnover ratio that leads the NFL.

When the teams first met at FedEx Field Sept. 25, there was plenty of drama in the presence behind center for the Commanders of ex-Eagle Carson Wentz. The Eagles sacked him nine times in the one-sided victory. Hurts threw for 340 yards and three TDs, with one going to DeVonta Smith in his best game, with 169 receiving yards.

Wentz was sidelined subsequently by a fractured finger, and Taylor Heinicke is 2-1 in starts as his replacement. The journeyman has completed 63% of his passes this year, with five touchdowns and three interceptions.

Other factors to consider

BetMGM’s oddsmakers have looked at all the factors, including the new injury of Commanders starting linebacker Cole Holcomb in addition to continued absence of star defensive end Chase Young, and made the Eagles an 11-point favorite. Taking the Eagles on the moneyline carries a price of -550, while a Commanders bettor could get +400. The points total is over/under 43.5.

In addition to the main betting options, BetMGM has numerous other markets for customers to consider, including its “Lion’s Boost”: Parlay the Eagles -10.5 with the game over 43.5 points at a return of +260.

The sportsbook has many players available for a bet as an “anytime” touchdown scorer, as well as to get the game’s first or last TDs. To score anytime, several Eagles are the most heavily favored, with Hurts at -120, Miles Sanders -115, and A.J. Brown -105. Washington running back Brian Robinson Jr. is +188, with Kenneth Gainwell of the Eagles +300.

BetMGM also has player props on individual performance, such as Hurts o/u 242.5 passing yards and Heinicke o/u 215.5. And under futures wagers, the Eagles currently stand at +500 to win the Super Bowl (third behind the Buffalo Bills and Kansas City Chiefs), +200 as the favorite to win the NFC, and are heavily favored at -750 to claim the NFC East.