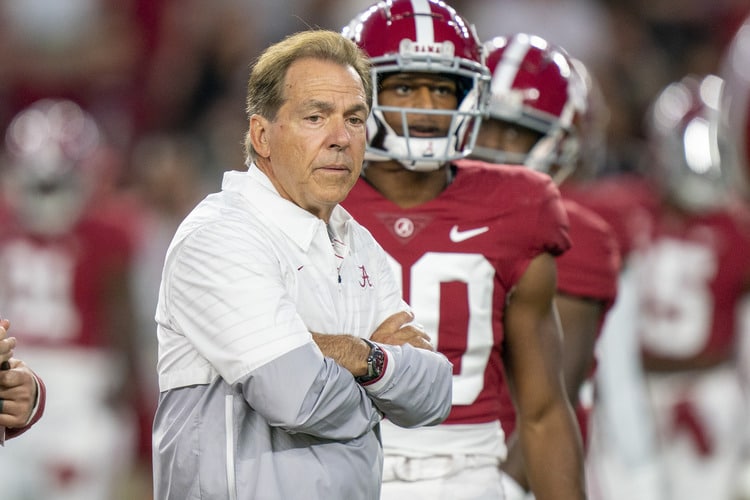 We’ve arrived at Week 7 of the college football season, and die-hard fans figure to spend much of this Saturday on their couch.

There are three matchups this Saturday between teams in the Top 15 of the AP Poll, including a massive showdown between undefeated SEC programs, as No. 3 Alabama (6-0, 3-0 SEC) hits the road to play at No. 6 Tennessee (5-0, 2-0 SEC).

It’s arguably the game of the day on a Saturday filled with marquee matchups.

To claim your BetMGM bonus, complete the following steps:

If your bet falls short, BetMGM will reimburse your lost stake in the form of free bets, up to the promotional cap of $1,000.

Alabama quarterback Bryce Young, who won the Heisman Trophy a season ago, is banged up, but the Crimson Tide are still favored by 7.5 points. Young’s sore right throwing shoulder could keep him out of the game, and if he suits up, he may be limited.

Fortunately for Alabama, its running game and defense are elite, making the Crimson Tide one of the few teams capable of contending for a national title with an injury to their starting quarterback. Georgia Tech transfer Jahmyr Gibbs has been one of the most dynamic running backs in the country this fall. He leads Alabama with 532 rushing yards, and he’s added another 220 receiving yards while averaging an impressive 8.7 yards per touch from scrimmage.

Defensively, Will Anderson leads a stout unit. The defensive end leads the team with 10 tackles for loss and five sacks, and he’s a likely top 10 pick in the 2023 NFL Draft.

Alabama is an impressive 4-2 against the spread this season.

Tennessee is no joke.

The Volunteers are 4-1 against the spread, and they’ve secured notable wins over Pitt and Florida. They went on the road last week and dominated LSU, winning 40-13. Three of Tennessee’s five wins have come by at least 25 points.

Quarterback Hendon Hooker is thriving in Josh Huepel’s offense, proving that he’s one of the best signal callers in the SEC. Hooker has yet to throw an interception in 140 passes, and he’s completing 70% of his attempts. He’s also averaging five yards per carry and has three rushing touchdowns.

Through five games, Tennessee looks the part of an SEC title contender, but can the Volunteers maintain their level of excellence against Nick Saban’s Alabama?

Bet on any game

Not interested in Alabama-Tennessee? You can use BetMGM’s risk-free promotion on any game, even outside of college football. Just make sure to use BetMGM bonus code HANDLETOP.