The company believes it can increase market share by the end of next year, while expanding into eight new states 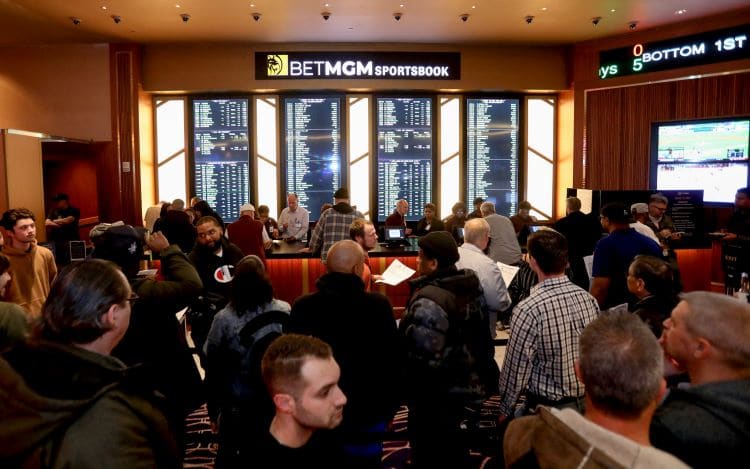 As Caesars Entertainment neared completion of its $4 billion acquisition of William Hill plc Wednesday, its longtime rival MGM Resorts had some consequential news of its own to share on the sports betting front.

Though DraftKings and FanDuel are widely viewed as the presumptive leaders in U.S. online sports betting market share, there are signals that BetMGM is catching up.

In February, BetMGM maintained a total market share of 22% in all U.S. jurisdictions where the company is currently active. While BetMGM has sports betting offerings in 12 states, the company expects to be live in eight additional jurisdictions over the next year. The figures are based on the company’s total market share by gross gaming revenue (GGR) for retail, online sports betting (OSB) and iGaming, BetMGM said in the presentation.

BetMGM also provided color on a metric known as “contribution breakeven,” which the company determines through factors such as state tax rates, market access revenue shares, and market-specific player values. In business parlance, contribution margin is determined when a company subtracts variable costs from the total price of a product. In Michigan, BetMGM projects it will be contribution breakeven by the first quarter of 2022. BetMGM made its Michigan online sports betting debut in late January on a day when 10 operators went live across the state.

Days later, BetMGM rolled out a mobile sports betting app in Virginia, another state that went live with online sports wagering in January. Having notched a partnership agreement with the MLB’s Washington Nationals, BetMGM plans to open a retail sportsbook at Nationals Park this season – the company’s first in-venue sportsbook. In March, Virginia ranked first in a category known as net gaming revenue (NGR) per player among all digital-only states the company operates in.

Across the U.S. market, BetMGM noted that its average time for contribution breakeven as it relates to online sports betting ranges between 12 and 24 months per state.

Other highlights from BetMGM Investor Day:

BetMGM is also turning to personalization as a tool for retaining customers, Chief Revenue Officer Matt Prevost outlined in a presentation. A customer with a demonstrated history for betting on MLB in-game parlays featuring the New York Yankees may receive an alert prior to the first pitch with a pre-built parlay. Then, throughout the game the customer would receive key stats and trends that could help the player develop an in-game strategy.

When asked if BetMGM will offer pitch-by-pitch betting for MLB offerings, the company did not indicate if it would offer the bet type at some point this season. The company does not have any tech limitation in its way if it does want to launch the bet type this year, said BetMGM Chief Operating Officer Ryan Spoon.

On Wall Street, pure-play sports betting companies, as well as gaming companies overall, have rebounded considerably from the height of the COVID-19 pandemic when several companies saw their stock price dip into the single digits. MGM Resorts traded around $41 on Friday, slightly below its 52-week high of $42.74 a share. MGM opened Wednesday’s session at $39.34, hours before the Investor Day presentation began.

Caesars Entertainment rose moderately on Friday, trading above $96 a share, one day after completing its acquisition of William Hill. Upon the announcement of that finalization, longtime William Hill US CEO Joe Asher stepped down from his position.

While DraftKings is up about 40% from November lows of $35, the Boston-headquartered company is down somewhat in recent weeks after approaching $75 at the start of March Madness. Flutter Entertainment, which is mulling the spinoff of FanDuel for a potential IPO, is currently up about 46% from its 52-week low.

MGM did not address whether it plans a renewed acquisition attempt of Entain later this year. Entain, formerly known as GVC Holdings, rejected MGM Resorts’ $11 billion takeover attempt in January.