Place your first bet up to 1K risk-free when you sign up for BetMGM using bonus code HANDLE. 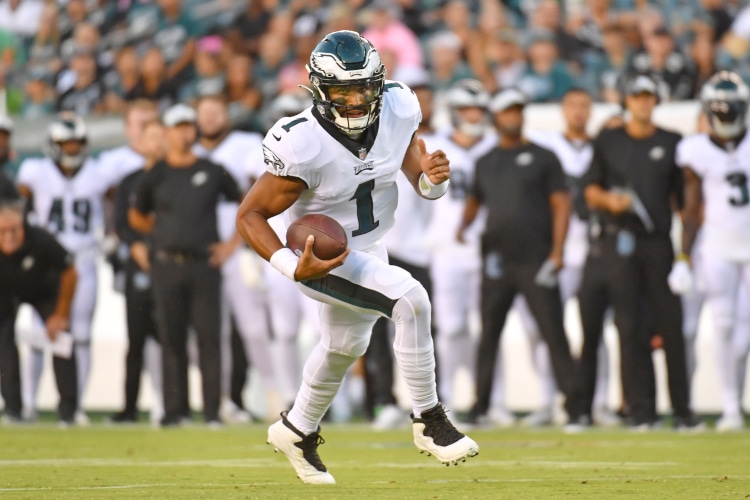 It’s officially the best time of year for sports bettors, as the National Football League is set to make its highly-anticipated return over the weekend. Following Thursday’s opening night showdown between the Buffalo Bills and Los Angeles Rams, football fans across the map will settle in on Sunday, September 11th for a packed slate of early season action and BetMGM Sportsbook is ready to take your bets.

The NFL’s Week 1 card is absolutely loaded from top to bottom, featuring 14 total games on Sunday capped off by a primetime matchup for the ages on Monday Night Football between the Denver Broncos and Seattle Seahawks. As the chaos begins to ensue, sports bettors can take advantage of a special $1K Risk-Free Bet when they sign up using BetMGM bonus code HANDLE.

As one of the premier digital sports betting destinations in the United States, BetMGM Sportsbook provides its players with an easy-to-use mobile platform and a slew of different ways to bet on the NFL. We’ll break down all of the details regarding the bonus below, as well as highlight some of the more delectable matchups on tap for NFL Week 1 betting.

Get in on the NFL action this weekend with a risk-free first bet up to $1,000 when you register for a brand new account using our BetMGM promo code, HANDLE. All users must be 21 years of age or older to be deemed eligible and must be located in an active BetMGM Sportsbook state at the time of wagering.

Claiming this offer is a total breeze:

That’s right! If your first bet with the site wins, you’ll get paid out in cash and the promotion ends there. However if your bet comes up short, BetMGM will have you covered with 100% of your stake back (up to $1,000) in the form of free bet credits. Free bets will be automatically credited to eligible accounts within 24 hours of the initial wager’s settlement and will arrive in increments of 20% if your lost stake is greater than $50. If you lost $100, BetMGM would fund your account with five separate $20 free bets.

Free bet credits can be used on any sports market or event listed on the BetMGM Sportsbook, however they will only pay out the winnings on any bets won, never the stake. For example, a bet won at +100 odds using a $50 free bet credit would only return $50 in winnings. If the same bet was placed and won using cash, the bettor would get back their initial $50 stake plus the $50 in winnings, totaling $100. Lastly, all free bet credits expire after 7 days of issuance, so be sure to use them fast.

The schedule for Week 1 is primed with countless high-intensity tilts and BetMGM Sportsbook has odds available for every single one of them. Follow along as we break down three of our must-see matchups taking place over the NFL’s first weekend back in action:

Following a 9-8 season that resulted in a first-round playoff exit, second-year HC Nick Sirianni will look to lead his Eagles into Ford Field and replicate what they did last year in the same building: defeat the Lions by a final score of 44-6.

There is no question as to whether or not Dan Campbell and his rambunctious young Lions remember what happened against the Eagles during Week 9 of last season, and that’s a good thing. Fresh off a 3-13 campaign that started winless for the first 13 weeks, Detroit is going to have a massive collective chip on its shoulder heading into 2022. BetMGM Sportsbook currently has the Lions at +850 to win the NFC North.

Bolstered by a criminally underrated offensive line, the emergence of offensive superstars in D’Andre Swift and Amon-Ra St. Brown, and a fairly easy opening schedule, all signs point to the Detroit Lions taking a big step forward for the first time in a long time – and it all begins on Sunday. But if you’re holding on to a BetMGM bonus code in PA, you might want to just take the leap with the Eagles using your risk-free bet.

Headlining Sunday’s late afternoon window at 4:25pm ET is an NFC North battle for the ages between the Green Bay Packers and Minnesota Vikings.

Entering the new year following a brutal first-round playoff exit at home to the San Francisco 49ers, Packers HC Matt LaFleur and quarterback Aaron Rodgers will look to pickup where they left off last regular season when the team finished 13-4 overall. One of Green Bay’s four regular season losses actually came at the hands of Minnesota, who took down the Pack at U.S Bank Stadium during Week 11, 34-31. Green Bay got the last laugh, however, as they trounced the Vikings in Week 17 by a final score of 37-10, effectively ending their season. Now that superstar WR Davante Adams is out of Green Bay and off to Las Vegas, things could look a bit differently as the teams face off for the first time since the trade. BetMGM currently has the Packers as the favorites in the North at -155, and the Vikings follow at +240. The odds could shift dramatically if Minnesota pulls out a win.

Finally having moved on from ex-head coach Mike Zimmer, Minnesota will try to turn a new leaf in 2022 under new head man and former-Rams offensive coordinator Kevin O’Connell. Led by an electric offensive core consisting of Kirk Cousins, Dalvin Cook, Justin Jefferson, and Adam Thielen, O’Connell should have all of the pieces in place to land Minnesota its first winning season since 2019. In order to make that happen, it all starts by taking down the Kings of the North.

Rounding out this incredible weekend of games is arguably the juiciest matchup of them all: a primetime showdown between Russell Wilson’s Denver Broncos and his former team in the Seattle Seahawks. The stage is set for 8:15pm ET on Monday Night at Lumen Field.

Following one of the biggest blockbusters of the offseason, Russell Wilson will return to Seattle in his very first game since being traded from the team he helped lead to nine consecutive winning seasons to begin his career. It’ll be a major test for Wilson moving forward, who will now lead a Denver unit that has failed to finish above .500 in any season since 2016. Denver will have a lot of question marks on opening night between Wilson’s first start and the arrival of new head coach Nathanial Hackett, who takes the reins in Denver after spending the last three seasons calling plays in Green Bay.

As for Seattle, HC Pete Carroll will look to prove he can still win without Wilson and history is certainly on his side heading into Monday’s grudge match. Seattle is 73-30 at home overall since Carroll took over in 2010 and even has a winning record as an underdog at 13-12. And despite going 0-3 straight up in Geno Smith starts last season, the reliable veteran backup actually led Seattle to a 3-0 run against the spread over that span. Between Denver’s new-look offense needing to get situated, combined with the energy that will radiate from the fans on Monday night, Wilson could be in for a rude awakening in his Denver debut.

Use your BetMGM 1K risk-free bet on any sport

If you feel that it might be a bit too early to plunge head-first into the craziness of the NFL, no worries! New users can claim their 1K risk-free bet by wagering on any sport or event listed on BetMGM! Just remember to use BetMGM bonus code HANDLE.