Wager on any Week 5 NFL game risk-free up to $1,000 when you sign up for BetMGM using bonus code HANDLETOP. 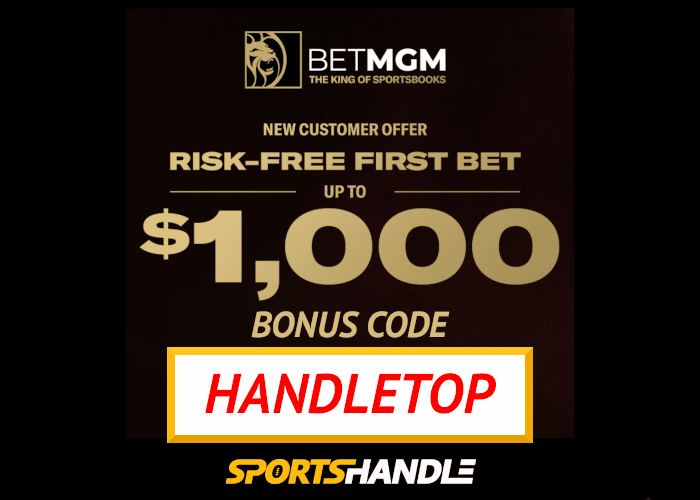 Week 5 of the 2022 NFL regular season is officially upon us and comes equipped with a loaded Sunday slate of 14 games before bye weeks begin in Week 6. Sunday’s action will begin at 9:30am ET across the pond in London for Packers vs Giants and culminate in Baltimore with a heated AFC North matchup for first place between the Bengals and Ravens on Sunday Night Football.

BetMGM Sportsbook has you covered with NFL Week 5 odds, player props, and everything in between, and new sign-ups can even take advantage of an exclusive welcome bonus consisting of a risk-free first bet worth up to $1,000. Register using BetMGM bonus code HANDLETOP and begin placing bets with one of the nation’s top sports betting destinations today!

Yes, you read that correctly. As long as you are 21+ years old, located in an active BetMGM Sportsbook state, and have yet to sign up for an account with the brand, you are likely eligible for a $1K risk-free first bet with the site. In order to qualify, make sure you enter BetMGM bonus code HANDLETOP during the account creation process.

To claim your $1K risk-free bet with BetMGM Sportsbook, follow these instructions:

Thanks to BetMGM’s lucrative welcome offer, there is no outcome that ends with you walking away empty-handed. If your first bet with the site is a winner, you’ll get paid out in cash as you normally would and can proceed as you wish. But in the event of a loss, BetMGM will fuel your account with a 100% refund in the form of free bets!

Here are a few noteworthy details regarding free bets at BetMGM:

Sunday’s Week 5 NFL card is absolutely loaded from top to bottom and BetMGM Sportsbook has you covered with countless ways to wager on every single game. Join us as we break down three of our favorite matchups taking place over the weekend:

Following yet another stunning comeback on the road, the New York Jets (2-2) will get the chance to play a meaningful game in October for the first time in what seems like a very, very long time. In fact, Gang Green’s 2-2 start marks its best since 2017, when the team began 3-2 under Todd Bowles before finishing 5-11. New York will now attempt to replicate that start by taking down a division rival in Mike McDaniel’s Miami Dolphins (3-1).

Obviously the biggest storyline surrounding this matchup is the health of Dolphins QB Tua Tagovailoa, whose head injury against Cincinnati last Thursday night sent shockwaves throughout the NFL. As a result, Tagovailoa will remain on the sidelines on Sunday and be forced to watch backup Teddy Bridgewater attempt to navigate a victory.

The Dolphins did edge out the the Joe Flacco-led Jets in last year’s matchup at MetLife Stadium, 24-17, and has had their number over the last few seasons – Miami has won four straight over the Jets and are winners in eight of their last nine matchups against New York. But similar to Miami taking down Buffalo at home in Week 3 (Bills had won 7 straight and 9 of 10), all good things must come to an end at some point. With Tua out and Zach Wilson in, I believe the Jet faithful will finally have something to root for on Sunday after two disappointing home games to begin the new campaign.

Bettors in New York and New Jersey can register for an account at BetMGM today. Unfortunately those based in Florida will need to wait for online wagering to resume in the state.

Up next on our list is an intriguing clash between two teams on very different trajectories over the past two weeks. It’ll be none other than Ron Rivera’s Washington Commanders (1-3) playing host to Mike Vrabel’s Tennessee Titans (2-2). Washington enters this matchup seeking its first win since Week 1, while Tennessee will aim for its third consecutive victory after crawling out of an 0-2 hole to begin the season.

Putting things lightly, the Washington Commanders haven’t put up a serious fight in a game since their Week 1 comeback at home over the Jacksonville Jaguars. Since then, they’ve lost every game by nearly double-digits, save for the team’s 9-point loss in Detroit that started out 22-0 in favor of the Lions. The defense hasn’t been atrocious by any means, but QB Carson Wentz certainly has.

Tennessee-based players can sign up and back their Titans with BetMGM! The BetMGM Sportsbook mobile app is also available in Washington D.C, however you must be within a two-block radius of Nationals Park in order to wager.

Though it won’t be nationally televised, this battle of the birds is shaping up to be one of the best games of Week 5. The Philadelphia Eagles (4-0), the league’s final remaining unbeaten team, will march into State Farm Stadium on Sunday at 4:25pm ET and look to pick apart Kliff Kingsbury’s Arizona Cardinals (2-2).

For Arizona, this game could go a long way in defining what kind of team they really are following a pair of lackluster performances at home against powers in the Kansas City Chiefs and Los Angeles Rams. Kingsbury, quarterback Kyler Murray, and the rest of the Cardinals roster will seek out their first win at home on Sunday, and hopefully one that does not require a late-game comeback of some sort.

As for Philadelphia, Nick Sirianni’s squad has been nothing short of flawless in 2022. After trailing 14-0 to the Jaguars early in Week 4, the Eagles responded with 29 unanswered before closing the door and advancing to 4-0 on the season. Unfortunately for them, remaining perfect in the NFL is a daunting task and this trip out west presents by far the biggest challenge of their season thus far. With home games against Dallas, Pittsburgh, and Washington to follow, along with a trip to Houston sandwiched in between, the Eagles’ schedule from here on out is far too easy for them to coast past Arizona. Expect this one to finish right around the number, with late-game chaos likely to ensue.

Bettors in Pennsylvania and Arizona can get in on the fun with BetMGM Sportsbook, now available in both states!

Wager up to $1K risk-free on any sport this weekend

If betting on the NFL isn’t your cup of tea, feel free to claim your $1K risk-free bet at BetMGM Sportsbook on any sport or event happening this weekend! Just remember to enter BetMGM promo code HANDLETOP while signing up. Here’s what’s on tap: