Was inside information at play here? Should we even care? 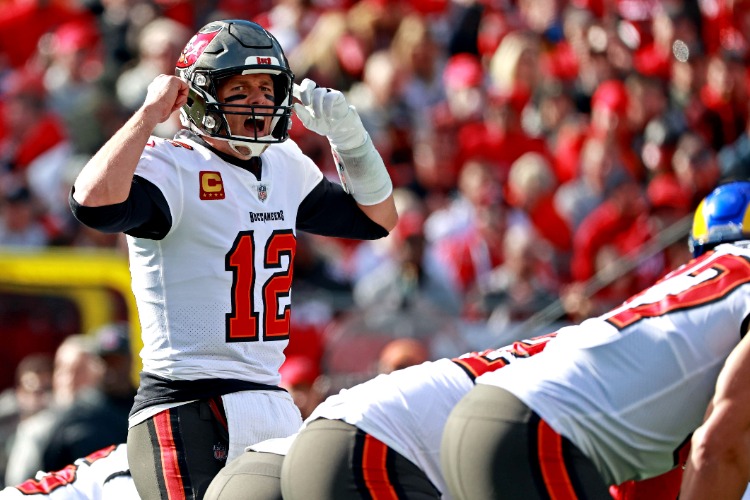 Here’s the story, of a man named Brady, who was bringing up … well, actually, bringing down the Tampa Bay Buccaneers’ odds to win the Super Bowl next year. (Sorry for The Brady Bunch cliche there. I was just – true story — discussing the genius of the Brady Bunch kids’ “Time to Change, so it was top of mind.)

Anyway, the Bucs’ Super Bowl odds have gone from upwards of 50/1 all the way down to 4/1 at the South Point (the odds are anywhere from +700 to +800 at the online books). One reason they’ve fallen so much at South Point: A bettor walked in there last Thursday and placed a significant amount of money on the Buccaneers to hoist the Lombardi Trophy at those 50/1 odds, according to a VSiN report.

South Point then moved the odds to 30/1, and then, a few hours later, the same bettor came back in to wager a little more at 25/1.

Later that day, the bettor — who was unknown to Andrews — came back again, dropped more money at 25/1, and Andrews lowered the odds to 15/1.

Then Sunday rolled around and Brady unretired, and Andrews dropped the odds all the way down to +400 and is facing a “six-figure liability” if Brady — who, at age 2,482, is the oldest NFL quarterback in history — can pick up an eighth Super Bowl championship.

And South Point wasn’t the only one: The Westgate SuperBook also got hit, according to Jay Kornegay, the vice president of sportsbook operations. Whether it was the same bettor is unknown (although likely).

Of course, there’s an unasked question in all of this: Did this bettor know something about Brady’s return? And the answer is …

… maybe? Maybe if the bettor stopped at one 50/1 bet, I wouldn’t blink. But coming back a second and third time the same day to bet at lower odds? Come on. Fool me once, shame on you, fool me twice, shame on me, fool me three times, pull the Bucs off the board already.

“The bets we took Thursday, March 10, there’s no doubt in my mind he knew Brady was coming back,” Kornegay told Sports Handle. “Did he have inside info? That’s the definition of inside info, and there should be an investigation by the NFL. Either Brady or someone close to him spilled the beans. The NFL is always touting integrity, and this is something they have to look into. They need to look at how this got out.”

Devil’s advocate: Maybe the bettor had no idea of Brady’s plans and had just been listening to Bill Simmons, who has been saying since Brady’s retirement announcement that he doesn’t entirely believe the GOAT had hung up his cleats (cloven hooves?). In fact, Simmons, on his latest podcast after Brady’s announcement, still thinks Brady might be headed to the San Francisco 49ers (+1300 on DraftKings for those Niners Super Bowl futures).

My Tom Brady prediction for 2022 is…pic.twitter.com/1qV0K7wkDn

Or maybe the bettor was simply listening to Tom “Never Say Never” Brady himself.

Seriously, do you know someone who knows someone? I do. I have a former NFL head coach who is one Kevin Bacon away from me. I’ve never been able to capitalize on this, but you’d better believe I would if given the opportunity.

I am not the “connected” type. I don’t have a Rolodex filled with sports figures. Truth is, I don’t even have a Rolodex. I am about as much of an insider as Arians’ daughter’s UPS driver. But still: I know a guy who knows a former NFL head coach, and obviously, I’m not the only one in that position. And again, I’m a nobody who is not actively seeking knowledge.

Of course, there are plenty of guys who know a ton of guys and are actively seeking knowledge. Basically, anyone who bets on sports for a living.

“Everybody chases information. Few people get the right info, and almost everyone thinks they have info that actually matters when it does not,” said Adam Chernoff, who has been on both sides of the glass and now works for Covers.com.

As for the sportsbooks themselves? Chernoff says it’s pretty much the same.

“Every bet expresses information and is the best tool for sportsbooks to use to gauge things,” he said. “But much like the people trying to interpret it to bet on themselves, a lot of books can’t see what matters either.”

Brad Feinberg, a pro bettor, doesn’t think true inside information is that prevalent. And if there was a bettor who routinely got it, they’d be a fool to tell him (or me).

“To get someone to admit that? You’d have to be an idiot,” Feinberg said. “I’ve never gotten any real inside information, but if I could? Oh my god, it would be incredible.”

And while Feinberg doesn’t think it’s happening all the time, he does believe the inside game is out there. But much like Chernoff, he says you have to tread lightly.

“Listen, if you know the general manager and he tells you they’re taking a linebacker with the third pick instead of an offensive lineman, you can make a fortune,” Feinberg said. “But information is like free throw shooting. Maybe your info is like Shaq, and only going to be good half the time, or maybe it’s like Steph Curry, and you’re hitting 90%.”

And as for this Brady bettor?

“I think the guy was probably guessing, unless he knows Tom Brady,” Feinberg said.

Another big-time bettor said information will sometimes fall into his lap, but that he’s not out there trying to find assistant locker room attendants to pump for intel — and no one he knows in the business is doing that either.

“Oftentimes that information has just as much of a chance of being faulty,” said the bettor, who spoke on condition of anonymity.

While Kornegay, who said his book in on the hook on Bucs futures for “low six figures,” believes the NFL needs to investigate this, he’s also not entirely sure how to stamp out future incidents.

“I’m not sure how to stop it, but it starts with internal policing,” Kornegay said. “The NFL has said it for years and years: Don’t talk about injuries, don’t talk about anything, and this is a little different, a season-long prop. If it slipped out, or one of his friends let it slip, or even one of his kids, then that was innocent. But it’s still something that should be stressed and should be supported by the league: Keep information locked down. That goes from the player to everyone they know. Their friends, family, agents, everyone. We’re a believer in transparency. It’s our friend. Either no one knows or everyone knows.

“The way this went down … the NFL needs to reiterate those internal rules.”

Whether it’s being pursued or not, inside information is always going to be part of the sports betting landscape — and no one is going to turn their nose up should they receive it. Can we police it? I don’t even think we should try. It’s bettors vs. the books, and every little bit of information is going to be used by both sides in the ongoing effort to come out on top.

By the way, my mother’s ex-business partner has a son who works in Hollywood and I’m 100% reaching out to ask him what the Oscar whispers are right now. Wish me luck.