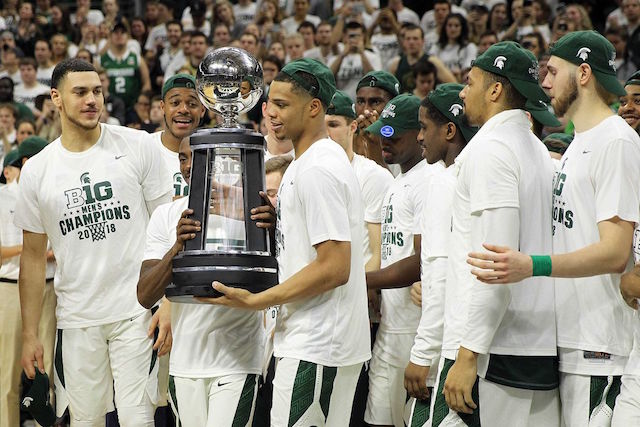 The Big Ten hasn’t had a national champion in men’s basketball since the 2000 season when Michigan State, led by the “Flintstones,” won Tom Izzo his first and still only title. The only Power 5 conference with a longer drought is the Pac-12, which hasn’t had a champion since Arizona in 1997.

Could the fact that the Big Ten is holding its conference tournament a week early this year actually help its top contenders in the Big Dance? Izzo thinks it could for his Spartans, who were the regular-season champions and are No. 1 in the USA Today Top 25 and No. 2 in the AP poll. They are +250 favorites to win their fourth Big Ten tournament this decade (last in 2016).

“I think, in this one strange case, for Michigan State, maybe having a little time with all the things we’ve been through would be a positive for us between the Big Ten and the NCAA tournament,” Izzo said during the Big Ten conference call Monday. “But coaches are no different than anyone else. … If anybody has some success in NCAA tournament, if they get in, the week’s going to be good. If you fail, the week’s going to be bad.”

The Big Ten championship game used to be held on Selection Sunday, meaning arguably the conference’s two best teams potentially had just three days of rest and preparation before the NCAA Tournament began. This year’s Big Ten tourney is held for the first time at Madison Square Garden in Manhattan and tips off Wednesday. The Big Ten had no choice but to play the tournament a week early because the Big East has a contract to hold its conference tournament at the Garden when all the other power conferences start theirs next week. About all Michigan State has to play for the Big Ten tourney is a potential No. 1 seed in the NCAA Tournament. At worst, Sparty will be a No. 2 even with an opening loss in the quarterfinals. Four Big Ten teams are locks for NCAA bids no matter what: MSU, Purdue, Ohio State and Michigan. Nebraska is right on the bubble, currently listed among the “First Four Out” by ESPN’s Joe Lunardi. The Huskers, +1000 to win this tournament, got a double-bye to Friday’s quarterfinals and would face No. 5 Michigan (+700) if form holds. Nebraska probably needs to win at least one game. The Big Ten likely only gets five teams in the Big Dance.

Ohio State was a huge surprise under first-year coach Chris Holtmann, is the No. 2 seed and +600 to win this tournament for the first time since 2013. If form holds, OSU would face No. 3 Purdue in the semifinals. The Boilermakers are +275 second-favorites. They had a bit of a hiccup a few weeks ago in losing three straight games but those were only by a combined eight points. The Boilers, a veteran group, closed with three straight wins. Purdue lost its lone matchup vs. Ohio State on Feb. 7 in West Lafayette, 64-63. The Boilermakers led by 14 about midway through the second half.

The Spartans bring a 12-game winning streak into the tournament and will open Friday against either Wisconsin or Maryland. Sparty was 2-0 against both schools this season. Given their druthers, I’d be willing to bet the Michigan State players would prefer to face rival Michigan in the semifinals instead of Nebraska. That’s because MSU’s last loss was 82-72 at home to the Wolverines on Jan. 13.

Purdue’s side of the bracket seems easier. Plus, I have a feeling Izzo wouldn’t be so upset if his team were to lose before the NCAAs instead of carrying a 15-game winning streak into it and the favored role. Take the Boilers at about +200 to win their first Big Ten tournament since 2009, upsetting MSU in the final. Purdue lost by just three in East Lansing on Feb. 10 on last-second Miles Bridges 3-pointer.

Note: Here’s the current odds at William Hill:  Purdue is 3/2. As always, shop around.