Bluhm Opponent Of Ordinance To Allow Stadium Sportsbooks In Chicago

by Chris Altruda
in Legal, Sports

The Chicago gaming turf war has begun before the first retail wager has even been placed.

Rush Street Gaming co-founder and CEO Neil Bluhm on Monday came out stridently in opposition to a proposed Chicago ordinance that would lift the “home-rule ban” on sports betting in the city and allow retail sportsbooks at its five stadiums or permanent nearby buildings.

The city Rules Committee had an informational meeting on Alderman Walter Burnett’s proposal, which he filed in July. It was originally slated to be referred to a pair of joint committees in the city but was rerouted by Alderman Anthony Beale via parliamentary procedure. Burnett’s 27th Ward includes the United Center, home of the Bulls and Blackhawks.

The meeting came barely more than a week after the city accepted five bids for the casino license available for downtown Chicago. Rush Street Gaming provided two of the bids, one of which would use the Lakeside Center south of Soldier Field as a centralized casino location, with the other potential site in the South Loop. Bally’s also presented two bids, and Hard Rock offered the fifth. All hope to be the one selected to open a casino in the third-largest city in the country by 2025.

The law allows for a retail sportsbook to conduct wagering either on site or within a five-block radius of the venue. Of the five venues the proposed ordinance would directly impact, Wrigley Field is the furthest along, as the Cubs and DraftKings entered an agreement in September 2020 with designs to construct a sportsbook near the iconic ballpark. The team received a key approval from the Chicago Commission on Landmarks in August for a proposed two-story sportsbook of more than 22,000 square feet to be located near the intersection of West Addison Street and North Sheffield Avenue.

Now, billionaire Neil Bluhm – who as chairman of Rush St gaming is behind 2 of 5 Chicago casino bidders – is speaking against the sportsbook ordinance. He says the ordinance would "create significant competition for the Chicago casino, wherever it is."

The stakes involving a casino in Chicago — long sought by its mayors, with Lori Lightfoot now closest to actually bringing it to fruition — were always going to be high for all parties involved. It has been growing clear how much a Rush Street winning bid would mean to the 83-year-old Bluhm, a Chicago native.

He confirmed during the meeting that he also has an ownership stake in both the Bulls and White Sox, creating the odd dynamic that Bluhm has skin on both sides of the ordinance.

Bluhm claimed allowing sports wagering at the stadiums “would have a materially negative impact on each of the five sites that are proposed for Chicago casinos, regardless of which one is picked.” He contended those sportsbooks would create “significant competition” regardless of the casino’s location, because people would go to those venues and not the casino.

Bluhm said Rush Street retained two analytic groups to conduct an economic impact study of stadium gambling on the proposed downtown casino, and they projected the casino’s revenue for retail sports betting alone would drop from $40 million per year to $13 million. He said it would be a double loss of sorts, since the city would also not directly be collecting tax receipts on sports betting revenue generated at the stadium locations.

In Bluhm’s view, it would also hurt in that fewer sport bettors “would walk around the casino and play slots and table games, and less people go to the restaurants at the casino if they can also be betting sports at the same time in the stadium.”

He returned to the study and claimed that with sports betting competition, the downtown casino would generate $61 million less revenue from slots and table games annually on top of the $27 million drop in sports betting revenue. The combined estimate of $88 million in lost revenue per year would be more than 10% of the $800 million in projected revenue a downtown casino would generate, according to a Union Gaming Analytics study in 2019 presented to the Illinois Gaming Board.

Bluhm’s current location in Des Plaines is the biggest generator of retail sports betting handle and revenue in the state. Since being the first to accept wagers in Illinois in March 2020 just prior to the COVID-19 pandemic, Rivers has accepted $141.3 million in wagers. That includes $89.2 million in 2021 after the IGB reported a handle of $596.5 million for September on Monday.

Rivers has accounted for 47.8% of retail sports wagering handle and 39.1% of retail revenue in Illinois in 2021. Its mobile arm BetRivers is third among the six operators for handle and revenue, generating $722 million worth of wagers and $60.4 million in adjusted revenue this year.

Lobbyists push back on Bluhm’s claims

He stated the percentage of mobile handle versus retail handle in the nine states that offer both is approximately 91.5% to 8.5%. Govertsen suggested Illinois’ current breakout of nearly 96% of handle being generated by mobile wagering will become the norm, further lessening retail handle and revenue.

Govertsen bluntly labeled retail sportsbook revenue as “almost an afterthought,” with casinos generating just 2.3% of total revenue from sports wagering in states where both is available. He said that percentage drops below 2% in Illinois casinos, and that his group “has not seen any meaningful cannibalization of casino revenue. As a result, we expect a similar to-be-seen dynamic in Chicago in that sports betting at venues like stadium and arenas is unlikely to have a material impact on traditional casino revenue.”

Mara Georges, a registered lobbyist for the United Center and Wrigley Field Holdings, echoed Govertsen’s position. She said her group found no evidence retail sports wagering at the venues would materially impact the Chicago casino. The ordinance is “the key to unlocking millions of dollars for the local economy,” she said.

Georges said that once a sportsbook for the United Center is licensed — apparently to be operated by FanDuel — it would follow through on development of a sports-themed restaurant and bar that would create 150 temporary construction jobs and 70 permanent service positions. She estimated construction on a DraftKings sportsbook at Wrigley to take 18 months, creating a very tight timeline for it to be open and accepting wagers for the start of the 2023 season.

Georges also spoke against any additional taxes the city might consider on top of the 17% tax rate on adjusted sports wagering revenue currently in place, when accounting for the 2% tax on all wagers made in Cook County in addition to the state’s 15% rate. She reminded that the city was “heavily involved” in the creation of the tax structure and said an additional city tax would lead to further mobile wagering instead of driving retail traffic to the city’s venues.

She also took direct aim at Bluhm’s testimony, describing him as interested in pushing “business out to his Des Plaines casino.” With an increase in the tax rate or failure to pass the ordinance, Georges asserted “bettors will leave the city and flee to locations outside the city.”

She also said some of Bluhm’s claims “rest in conjecture and fail to accurately state the facts,” considering sports bettors who wager online will also still visit casinos as opposed to being siloed into one type of gaming.

One thing clear: there is much to discuss

.@Alderman_Beale pulls no punches: "This is one of the worst pieces of legislation that has been drafted and being presented to us as far as gaming is concerned." Says it's not the right time while casino bids are out.
(Beale sent this ord to Rules Committee in July) pic.twitter.com/QtDTFLSSXq

Given that the tax receipts from the downtown casino revenue are to fund pensions for the police and fire departments, there is concern about the potential impact of allowing retail sportsbooks in the city. Before the testimony, Beale came down hard against the ordinance. He said that “in its current form, I think this is one of the worst pieces of legislation that has been drafted and being presented to us as far as gaming is concerned.”

He took issue with the ordinance’s timing, when the city is in its earliest stages of reviewing the casino proposals. He said the measure could discourage “one of our potential bidders from opening up a casino. We don’t know what this will do, or what it won’t do, as far as somebody invest billions of their own dollars in the city of Chicago …

“I’m opposed to the ill timing that we’re spending on this now, when we should be spending all of our time and energy on a casino that’s going to be bringing in hundreds of millions of dollars into this city.”

Alderwoman Michele Smith asked Burnett about the possibility of amending the ordinance to ensure a portion of the revenue derived from the license fees would go toward the pensions, while Alderman Ray Lopez said he would be a no vote as the ordinance is currently written.

Lopez said acting on the ordinance was “falling for a false narrative that we have to do this because the state is giving us an opportunity and their budget is predicated on us taking action moving forward. We heard this discussion on cannabis … and I feel like we’re hearing it again.” 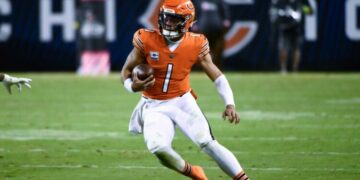