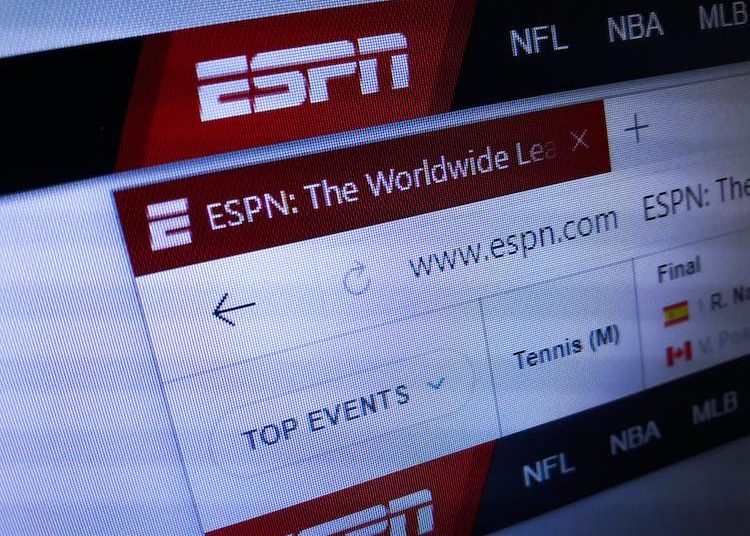 The Worldwide Leader in Sports slid across the plate this week, the fourth of the big four broadcast networks to completely, unabashedly embrace legal sports betting.

William Hill Sportsbook (through Caesars/Eldorado Resorts) becomes the provider of betting data and odds information across ESPN apps and platforms, while the new arrangement sets DraftKings as ESPN’s exclusive daily fantasy sports provider, to be likewise featured network-wide. Together, William Hill and DraftKings are “co-exclusive sportsbook link-out providers,” or put simply, ESPN will refer readers/viewers to those two sportsbooks. (ESPN is owned by Disney, which also owns ABC.)

One week before ESPN’s announcement, NBC Sports/NBC Universal unveiled a major partnership with emerging bookmaker PointsBet, a deal that also gives NBC a 4.99% ownership stake in the company. The NBC logo already appears prominently on PointsBet’s landing page, and likewise PointsBet’s logo has near-top billing on NBC Sports’ navigation bar. In February, CBS Sports/CBS Interactive, which had leaned into sports wagering via the site SportsLine long prior to the Supreme Court’s striking down of the federal ban on sports wagering in 2018, announced a partnership with William Hill that features the bookmaker on all CBS Sports platforms. And in May 2019, FOX/FOX Sports literally became the house: FOX took a stake in international gambling giant The Stars Group and later launched its own branded sportsbook, FOX Bet, which is integrated into its programming.

While surprising to very few that ESPN eventually warmed up to sports gambling to this extent — the family-friendly Disney has fought and spent against casino expansion in Florida to protect its grip on entertainment dollars — the Mouse is now out of the house.

“Our new agreements with Caesars and DraftKings collectively represent the next significant milestone for ESPN to diversify our exposure and deepen our commitment in the sports betting space,” said Mike Morrison, ESPN’s vice president of business development & innovation, in a statement.

ESPN’s foray previously had consisted of its sports betting vertical Chalk, the show Daily Wager, plus it recently opened a new studio at the LINQ Hotel in Las Vegas for betting-centric programming.

To put this deal and the earlier pacts in perspective, take stock of them and look forward a bit, I called on a few sports media and business observers for their takes.

Impressions on the lot of network sports betting deal landscape

“ESPN and NBC Sports are the two powerhouses for sports content,” said Daniel Zucker of Zucker Media Group (and a Sports Handle co-founder). “The success of their sports betting partners will rest upon the networks’ internal team and their ability to deliver broadcast, cable and digital assets effectively.”

William Hill had been seeking media partners and certainly teamed up with a forceful pair, putting March Madness exposure on its docket annually via CBS (well, in non-pandemic years) and now has Worldwide Leader eyeballs, which brings in Monday Night Football. But to what extent will this visibility on air and online lead to actual increases in the betting handle — and revenue?

“I’d be fascinated to see how much funneling ultimately comes from ad reads during actual sporting events vs. regular sports shows vs. gambling specific shows vs. digital,” said Ryan Glasspiegel, sports media scribe for Outkick. “I’d call CBS kind of a sleeping giant, at least digitally. You may not see their content as much through Twitter as you do other places. However, just anecdotally, their SEO is incredible. I feel like when I’m searching for something random, their story on it comes up an astounding proportion of the time.”

“I’m not a believer that just because someone is watching sports on a particular channel that they’re apt to bet through the associated sportsbook,” Leff said. “With that said, the NBC Sports/PointsBet partnership could work if Comcast [wholly owns NBC] incorporates the sportsbook within the last mile. Think: voice activation.”

Pulling back the veiled references

Join @geoffschwartz and @jasonrmcintyre as they analyze and lock in their picks for Week 2 against the spread: https://t.co/NKpkruEBGi

Pre-PASPA, legendary broadcasters Brent Musburger and Al Michaels would slip in sports gambling references, usually to the spread, during broadcasts. The floodgates are not yet entirely open or welcome by some viewers, but the separation of broadcast network and sportsbook is now over.

“It may be gradual, but the gambling references creeping into sports TV broadcasts was inevitable and will inevitably grow even greater,” Glasspiegel said. “We’re going to start seeing point spreads and totals all over the place on them. I wouldn’t even be surprised if by 2025 we start to see prop bets and live lines with integrations to bet them immediately on mobile.”

“The intersection of sports betting (lines) into play by play broadcasts is here. In-turn it will hyper-drive in-game (live) betting,” said Zucker.

Live betting is viewed as the next great frontier in sports betting, or at least terrain not yet fully explored in U.S. sports. Perhaps more integration into live broadcasts play-by-play — not merely separate, sports-betting-focused broadcasts that NBC has already explored — will advance the ball.

When is enough enough?

Pretty clever and relevant integration, so props to CBS and Will Hill on that.

But this is digital  – let’s turn back to live TV programming. Might sportsbook integrations on air turn some folks away?

“I wouldn’t think so, unless sports betting adverts begin to dominate the broadcast — as they did during the DFS rush of 2015,” said Leff. “The networks would be wise to limit themselves to one sports betting commercial per spot break (as Sky did in the U.K.) to ensure they don’t alienate non-bettors.”

“It’ll probably turn some people off, especially people who have an aversion to gambling because of religious reasons,” said Glasspiegel. “I have no idea how many people that is. I bet more people wind up complaining about it than dramatically changing their habits over it.”

The conversation, as do many current discussions in the sports betting industry, turned to Barstool Sports and the intrigue around the Barstool Sportsbook.

“This isn’t about broadcast networks, but the case study I’m most interested in now is Barstool, whose book launches on Friday,” said Glasspiegel. “From Dave Portnoy on down, the brand has a very passionate following online. I’m fascinated to see how they do in market share versus all of the books that are paying gobs of money to advertise with the traditional game broadcasters. It’s a genuinely intriguing experiment as far as customer acquisition costs are concerned and I’d bet on it succeeding.”