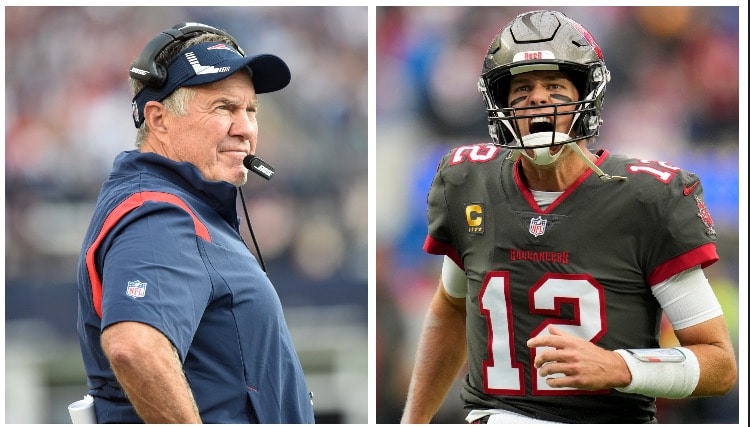 For Sunday night’s highly anticipated battle between the New England Patriots and Tampa Bay Buccaneers, mobile sportsbooks will find themselves in the unfamiliar position of rooting for the Patriots. For most of two decades, the Tom Brady-Bill Belichick marriage that produced six Super Bowl titles saw the Patriots as a favorite — and over 60% of the time, they still managed to cover the point spread.

But times have changed, Tom Brady’s home jersey is mostly red, and the city where he most recently delivered another Lombardi trophy is about 1,350 miles south of Foxboro. Now, as a visitor to Gillette Stadium for the first time, the 44-year-old quarterback’s Buccaneers opened at most shops between 5.5- and 6.5-point favorites and are now up to 7.

Not surprisingly, this quasi-Revenge Bowl between the legendary coach and GOAT quarterback, following a somewhat sour separation in 2020, is going to generate more betting action than any other regular season game. It may only be matched by the TV ratings and number of articles, like this one, underscoring the storylines.

“This will be the biggest volume regular season game of the year,” Caesars Sportsbook VP of Trading Craig Mucklow told Sports Handle. “There isn’t a primetime matchup all season of this magnitude and the betting volume will reflect that. We have already seen significant volume on the Bucs.”

“The game opened up at Patriots six and a half, now we’re at six and a half with a little juice on it. We’re going to eventually probably get pushed to seven on this game. I don’t think it goes much higher than that, but it’s certainly a Buccaneers betting crowd so far.”

Same story at WynnBET, which is now live in eight states.

Said WynnBET Senior Trader Grant Tucker: “It has been nothing but Tampa Bay money on the spread thus far. We opened at Tampa Bay -5.5 and now sit at Tampa Bay -7 (-105). This game has definitely attracted the majority of NFL action so far (outside of Thursday Night Football). It is the most bet game on Sunday by far, especially for this early in the week.”

When will the Patriots money show?

Action is seriously lopsided at every book.

Bulk of action will come in on the weekend and likely will even out the percentages a little bit, but this is one of the most-lopsided bet games that I've seen this late in the week. https://t.co/8lh4w9HFjw

Of course, while the volume bar is still decibels above where it usually resides at this time, it’s still early.

This Sunday is also an opportunity for one of the two squads to shake off a loss from last week. The Patriots got whacked 28-13 at home in Week 3 by the New Orleans Saints, while the Bucs were overmatched by the Rams in Los Angeles in a 34-24 defeat.

Again, this is still early in the NFL betting cycle, but the volume so far has been a serious Buccaneers stampede.

“97% of tickets and 97% of dollars wagered on the spread are on Tampa Bay,” Mucklow said of the volume at Caesars as of Wednesday. “The spread is currently Bucs -7 after being at -5.5 on Sunday. Coming off a loss with the motivation for Brady against his old team and the chance to break Drew Brees’ all-time passing yards record in Foxboro, this will be one-way public traffic on the Bucs. At some stage, the sharps will buy back the Pats spread.”

(The now-retired Brees, who is also now a PointsBet Sportsbook brand ambassador, currently holds the all-time record with 80,358 yards to Brady’s 80,291, for a difference of only 67.)

But which sportsbooks, if any, will see that buyback (i.e., dollars coming on the underdog after there’s a ton of bets on the other side pushing the line out)?

“I don’t know if seven is the buyback,” Avello said. “I do know that 7.5 is a buyback. But seven, I’m not sure. Right now, if we went to seven flat, we might get some buyback, but we may not. One thing about buyback is that when you’re the only person with a number out there that’s a key number, maybe we’ll see buyback. But if you can find that same number at other locations, multiple locations, then sometimes there is no buyback.”

Asked if the handle would double the second most heavily bet standalone primetime game this season, Avello tempered the notion.

“I don’t think so. We’ve been doing big numbers on isolated games. So it might do 10% more, maybe 20% more than a game like that.”

For context, he pointed to some savvy scheduling and quality games.

“There have been some really good Sunday night and standalone games so far,” Avello said. “There’s not a lot of duds, so to speak. So I would give them a lot of credit on the games that they’ve picked. And games have been sensational. I mean, a lot of games have gone down to the last minute.”

Those include the Buccaneers’ 31-29 victory over the Cowboys in the NFL season opener on Sept. 9, which concluded with a 36-yard game-winning field goal by Ryan Succop. NBC’s Sunday Night Football crew also had the Ravens’ 36-35 thriller over the Chiefs in Week 2, plus the Packers’ 30-28 Week 3 victory over the 49ers on a game-winning 51-yard Mason Crosby boot as time expired.

Tell a friend: @TomBrady returns back to New England on Sunday night.

The prop betting will be special for this matchup. with Brady poised to claim the passing record. Caesars has added several props with Brady needing 68 yards to break Brees’ record; the first is one of the sentimental variety:

Gronkowski is the favorite for the same receiving prop at DraftKings at +300.

“Makes total sense,” Avello said. “[Brady has] got Godwin (+350) and Evans (+450) and Brown (+500) and some other guys that he could also go to. But I think if he’s aware of what’s going on, he’ll try to hit his guy who’s been with him” and caught more Brady touchdown passes (by far) than any other player, with 102 between the regular season and playoffs.

Gronk, by the way, also left on a somewhat sour note in New England, retiring for one season in 2019 after losing his passion for the game (and breaking, bruising, or puncturing most body parts or internal organs). He reunited with Brady in Tampa Bay after the Pats agreed to trade the big tight end for a fourth-round draft pick in March 2020.

DraftKings is also keying on the expected record-breaking pass, with the prop asking how many passes it will take for Brady to eclipse Brees’ mark: over or under 5.5. One more narrative to watch that bleeds into betting is the Buccaneers’ team total, which is hovering around 28, as the game total is 49.

Will Brady try and stick it to Belichick and New England? The QB is Michael Jordan-level competitive, and Bucs head coach Bruce Arians has a history of running up the score.

“It looks like that team total has been taking some over bets across the market,” said Tucker of WynnBET. “We have seen some small bets on the over, but not enough to warrant a move. An over of 28 points is what we are currently hanging. I also expect this to get bet up prior to kickoff. Tampa Bay’s offense just has too many weapons and Brady should have the ball in his hands for a lot of the game. I expect defensive coordinator Todd Bowles to show some exotic looks to frustrate Mac Jones early and often.”

“If this game was secure and the Bucs had a substantial lead, I don’t think Brady’s going to rub it in,” he said. “I really don’t. I mean, although there’s been some ill feelings between him and Belichick and Kraft and some of the stories that have come out, the team has been good to him. Very good. The town’s been good to him. And so I don’t think he would ever do that. I think it’s about Tom Brady going up there and trying to get a win.”

As for the game total, it’s all about the over.

“Unfortunately for us, we have only had one primetime total go under,” Mucklow noted. “Combined with some media personalities preaching Brady to pour it on, we will see significant money on the over. The decision probably comes down to how many points New England can score to impact the total.”

The Bucs will also be a popular teaser leg, as bettors can take them to -1 on a 6-point teaser — possibly linked with the Bengals on Thursday Night Football, as Cincinnati is favored by 7.5 at home over the lowly Jacksonville Jaguars.

“Where we’re at on Bucs-Patriots is certainly going to depend on where some of these games are leading up to that,” Avello said. “And that all starts with tonight’s game, where you’ve got the Bengals seven-and-a-half, if the Bengals are going to be tied into a lot of teasers and moneyline parlays. And that happened last week, too, with the Thursday night game. And then all of that’s going to lead into the Titans (-7) at the Jets, and then that’s going to go into the Saints (-7.5) and the Giants and then the Chiefs (-6.5) over the Eagles. All those games and then probably the Packers (-6.5) over the Steelers, all filtering down to that one game.

“So if all those other teams get there,” Avello said, “there will be a pretty good-sized hazard on the Bucs.”