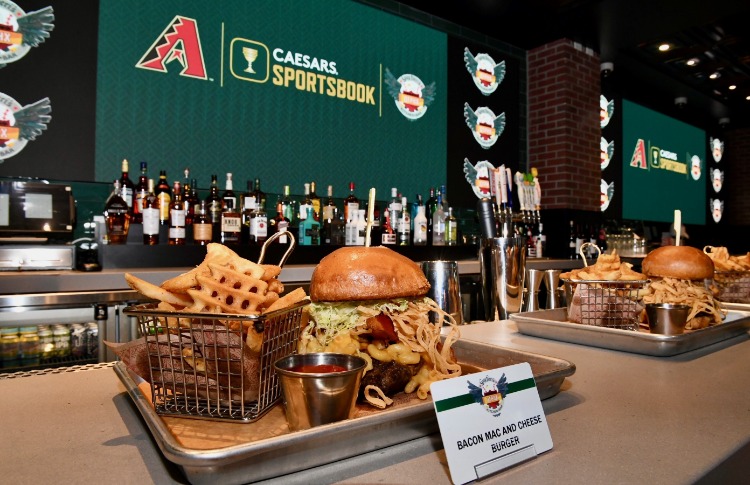 First, the company had a grand opening of its sportsbook at Chase Field on June 21. On Saturday, it opened an in-person betting location at the Arizona Downs horse racetrack location. Caesars previously launched its mobile platform on the first day of the 2021 NFL season.

The location at Chase Field — only the second Major League Baseball stadium with a live retail sportsbook — includes a Guy Fieri Kitchen + Bar.

“What an incredible day for our fans, sports enthusiasts, guests, and especially for our organization,” Diamondbacks President and CEO Derrick Hall said via press release. “We are proud to partner with Caesars Entertainment and Guy Fieri, to bring a year-round first-class sportsbook, restaurant and event space to downtown Phoenix. Everything about this dynamic venue, from the food to the design to the service, has been meticulously planned for an unmatched guest experience.”

Here’s a look at the books

The Chase Field location is described as a state-of-the-art sportsbook with wall-to-wall flat-screen televisions and with teller windows, kiosks, and lounge-style seating over two floors. The site also includes an outdoor patio with televisions.

The Arizona Downs location features self-service kiosks as well as a betting window at which customers can cash tickets. The track hosts live racing on Monday and Saturday nights in June and July, and on Mondays, Tuesdays, and Fridays in August and September.

Here’s a look at what you’ll find at Arizona Downs and Chase Field:

At both locations, as well as on the mobile platform, customers can earn Caesars Rewards loyalty points.

The Chase Field location is the fourth at a professional sports venue anywhere in the U.S. Caesars also owns and operates the sportsbook at Washington, D.C.’s Capital One Arena, which opened in 2020 as the first of its kind. Since then, FanDuel opened its cutting-edge property at the Footprint Center in Phoenix in 2021, and BetMGM this year opened its book at Washington’s Nationals Park.

Since the Supreme Court overturned the Professional and Amateur Sports Protection Act in 2018, six U.S. jurisdictions have authorized professional sports teams to take part in legal wagering — Arizona, Illinois, Kansas, Maryland, Ohio, and Washington, D.C. Wagering is not yet live in Kansas or Ohio, and casinos have been permitted to open their sportsbooks in Maryland, but pro sports venues are still in the pipeline for approval.

D.C. United announced on Wednesday they have partnered with FanDuel to open a sportsbook in 2021 at the club’s home stadium, Audi Field, pending licensing and approval from the DC Lottery. https://t.co/GOivQtpYWb

In Washington, D.C., a third sportsbook at a pro venue is set to open. FanDuel has plans to open its location at Audi Field early next month. The company is partnered with DC United, and Audi Field will become the first Major League Soccer stadium with a physical sportsbook when it opens.

In Chicago, DraftKings last week held a ceremonial beam signing at its site at Wrigley Field, while FanDuel is building out its space at the United Center. DraftKings is planning to open by the start of the 2023 baseball season.