Casino giant will rename retail sportsbook to Caesars, online app to Caesars Sports during the fall 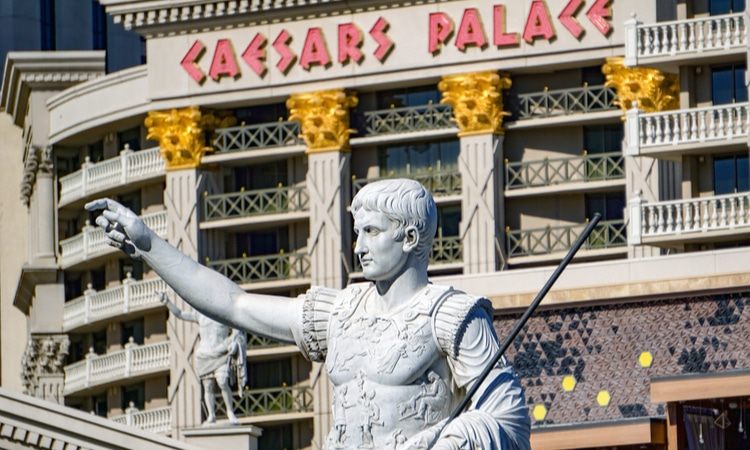 To paraphrase William Shakespeare’s Mark Antony, “I came to bury William Hill, not praise it.”

Caesars Entertainment CEO Tom Reeg announced during an earnings conference call Wednesday the gaming giant will rebrand its retail sports betting operations from William Hill to Caesars and the online sports wagering app to Caesars Sports, with an eye on having both in place ahead of the upcoming football season.

“We’re going to rebrand our books at Caesars, rebrand our apps as Caesars Sports, and tie our business into our Caesars Rewards database,” he explained while detailing a robust first quarter earnings period. “As I look to what’s out there in sports, and do the analysis of the numbers, there are some things that make us optimistic. There’s a great correlation between spend and market share at this point.”

Reeg’s announcement comes less than two weeks after Caesars closed its $3.7 billion purchase of the British-based bookmaker that was originally announced last September.

As the NFL has become, in Reeg’s words, “the big Kahuna” in the sports betting space in the United States, the goal is to have the rebrand in place before September. He conceded, however, the “single wallet” likely will not be ready in time for football season. He believes there is plenty of growth for Caesars in sports betting considering William Hill “was fighting with an arm behind their back, because of the limbo between signing and closing the transaction.”

Reeg also detailed how Caesars is generating more than $100 million of free cash flow per month, and some of that will go into aggressively building out sports betting. He cited the success competitor MGM has enjoyed in Michigan and said that Caesars also will deploy a new software system to be used throughout its properties nationwide while leveraging the company’s expansive customer database.

“We’ve the largest loyalty database in the business, bar none,” he said. Reeg referred to Caesars as a “low-cost producer” that can make new acquisitions “at certainly a competitive cost, if not one of the lowest in the business,” and its cash flow will be used “to invest in this business as aggressively as we need to going forward.”

The Caesars CEO did not disclose a target in terms of attaining a market share percentage, acknowledging that it must “invest considerably more than has been invested historically here,” but he was confident the company can do so in an “efficient manner” with the acquisition of William Hill completed.

“We are very early in this process, we’ve got a great hand to play, and I have tremendous confidence in our ability to operate and be a leader here, and that’s what we’re setting out to do.”

Reeg expects Caesars to leverage its recent content deals for further growth. One from April made it one of three official sports betting partners of the NFL along with DraftKings and FanDuel, and a September deal with ESPN made William Hill the exclusive odds provider for the Disney-owned sports network giant. Reeg suggested those two deals have put Caesars in a prime spot as others try to catch up.

“We were very early telling people we expect to see continued convergence on the media side. We’re really the only significant player at this point,” Reeg said. “Now that we’ve bought William Hill, that controls everything. We’re a one-stop shop. If you’re looking to get into this business, we’re certainly a logical call and you should expect we’ll continue to have those discussions, and if there’s something that creates more value for us down that road, you should expect us to head there.”

Reeg also said Caesars will sell the non-U.S. assets of William Hill at some point over the next 12 months. He acknowledged his company is “not good at running a non-U.S. business” and that there are “certainly other people out there who will do it better than us.” He said that sale will provide capital to be used in ways to better “drive returns to shareholders.”