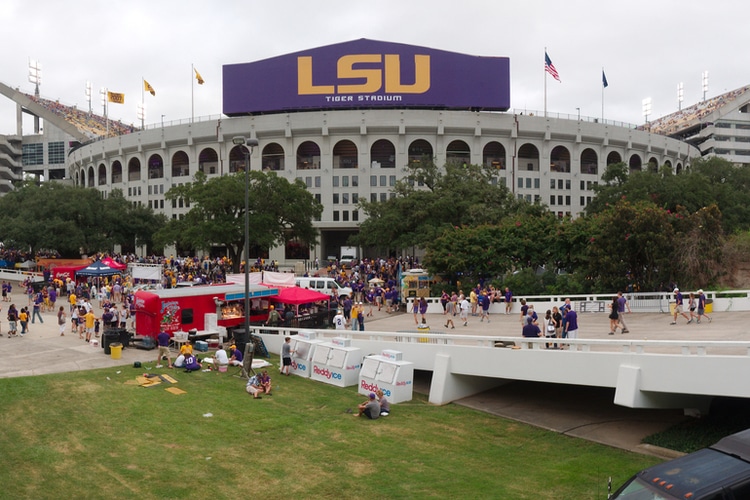 Photo by Roberto Michel via Shutterstock

“Geaux Tigers” just took on a much bigger meaning in Louisiana.

Louisiana State University announced a partnership Friday that makes the Southeastern Conference powerhouse an exclusive sportsbook and gaming partner of Caesars. LSU is just the second school from a “Big 5” power conference — the ones that carry the most clout when it comes to college football and other high-revenue Division I athletics — to enter a partnership with a sportsbook, after the University of Colorado signed on with PointsBet in September 2020.

“LSU Athletics programs have always exemplified excellence, and at Caesars, we couldn’t be happier to partner with such an iconic brand in college athletics,” said Chris Holdren, Co-President of Caesars Digital. “We have a proud legacy in Louisiana, and bringing LSU fans and alumni closer to the sports they love while also offering scholarship opportunities will help us build upon that.”

Louisiana could launch sports wagering before the end of the year, but there is no definitive timetable. State Police Major Chuck McNeal said at Thursday’s Louisiana Gaming Control Board meeting that eight applications for sports betting licenses have been submitted, but Hurricane Ida caused a pause in the vetting of applications since that process falls under the purview of state police.

Caesars is making the Pelican State a priority, having rebranded Harrah’s Casino in New Orleans and acquiring naming rights to the Superdome in July. Caesars will have signage for Saturday’s game at LSU against Central Michigan and received naming rights to the new Caesars Sportsbook Skyline Club at Tiger Stadium.

For the first time, a perennial powerhouse in college athletics is naming an Official Sportsbook partner.

In partnership with @LSUsports, we announce a multi-year deal to make #CaesarsSportsbook the Exclusive Gaming & Sportsbook partner.

The partnership allows Caesars to leverage LSU’s considerable national presence as an SEC member.  Caesars received naming rights at the Pete Maravich Assembly Center, home to LSU’s basketball teams, as well as its women’s volleyball and gymnastics teams, with the latter among the nation’s elite programs.

There will also be signage at Alex Box Stadium, home of LSU’s baseball team. The Tigers finished 2021 as the 18th-ranked team in the country, and the SEC is annually one of the premier conferences in that sport. Overall, Caesars will have digital and broadcast sponsorship rights to all 21 of the school’s intercollegiate teams and an exclusive presence on the LSU Sports Mobile App.

“LSU has always taken pride in providing fans with unique, innovative, and world-class experiences, and our new partnership with Caesars Entertainment will do just that,” said LSU Athletics Director Scott Woodward. “We share a clear vision of how athletics and entertainment can come together to enhance the fan experience, and we are excited to join with Caesars to make that vision a reality.”

The sides were brought together by Playfly Sports, the school’s third-party, media-rights holder.

“As a proud partner of LSU Athletics, we are focused on creating innovative partnerships to engage sponsors and unlock meaningful new revenue sources,” said Michael Schreiber, founder & CEO of Playfly Sports. “Given the interest in and access to gaming, we are excited to responsibly bring Caesars Sportsbook and LSU together.”

Though not the first partnership between a college and sportsbook, LSU’s high-visibility status as 2020’s College Football Playoff champion and recent resurgence in men’s basketball, in addition to being in the nation’s most visible conference, gives Caesars a platform that dwarfs the one PointsBet has with the University of Colorado.

And being the first SEC school to partner with a sportsbook has the potential to open the floodgates for the conference’s other 13 current members. The SEC will add — possibly as soon as the end of the academic year next spring — Texas and Oklahoma following those schools’ decision to leave the Big 12 earlier this summer. In the current SEC configuration, only five schools — Tennessee, Vanderbilt, Arkansas, Ole Miss, and Mississippi State — are in states where sports wagering is legal.

Of those five, Arkansas and Mississippi have only retail wagering, while Tennessee is digital-only. Florida could potentially have sports wagering this year, but it must also survive a series of legal challenges. Kentucky and Alabama have seen uneven progress, Missouri and Georgia have had small shoots of progress, and South Carolina seems the furthest away of any state with an SEC school.

But given the seemingly endless arms race of escalating athletic budgets, as well as the new frontier of student-athletes pursuing their own financial gain through Name, Image, Likeness, it stands to reason LSU’s deal with Caesars may serve as a template for trendsetters, rather than an outlier, both nationally and regionally.