Join Caesars Sportsbook using the promo code HANDLEFULL to claim your First Bet on Caesars up to $1250. 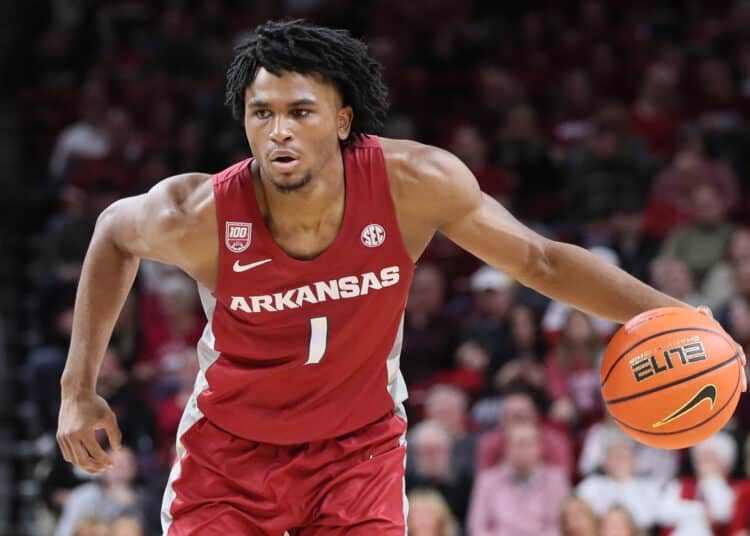 Feast Week is officially in full swing and that can only mean one thing: the Maui Invitational is back. The tournament got off to a hot start on Monday as Creighton, Arkansas, San Diego State, and Arizona picked up wins and now the matchups will get even tighter as we move on to the second round.

As the action gets set to tip off this afternoon, there couldn’t possibly be a better time for new sports bettors to claim their First Bet on Caesars up to $1250. That’s right – create a brand new account with Caesars Sportsbook today using the promo code HANDLEFULL and the site will have you covered if your first bet falls short.

As long as you are 21+ years of age, a first-time customer with Caesars, and are located in an active Caesars Sportsbook state at the time of wagering, then you are likely eligible to jump on this can’t-miss offer ahead of today’s college basketball action.

If you happen to check off all the boxes, you can get started by doing the following:

What happens if my First Bet on Caesars loses?

If the event of a loss, all eligible users will have a free bet token added to their account within 48 hours of bet settlement. The free bet will arrive as a single-use token that cannot be broken up.

If your free bet is placed and results in a win, keep in mind that it will only return the winnings from the bet, and not the stake of the free bet itself. Win or lose, the value of the free bet will remain with Caesars.

All free bet tokens at Caesars Sportsbook come with an expiration date of 14 days, so make sure you don’t forget to use it before then.

The Maui Invitational will resume this afternoon at 2:30pm ET, starting with a matchup out of the loser’s bracket between the No. 21 Texas Tech Red Raiders and the struggling Louisville Cardinals. Texas Tech will look to bounce back following Monday’s 76-65 loss to the Creighton Blue Jays, and should have a prime opportunity to do so against one of the weaker Louisville squads in recent memory.

HC Kenny Payne is already on the hot seat after just four games coaching his alma mater, as he has led the Cardinals to an abysmal 0-4 start that includes home losses to Bellarmine, Wright State, and Appalachian State. Louisville did not fare any better in its first game against a fellow Power 5 program, as the Cardinals were demolished by No. 9 Arkansas in their opening round Maui game, 80-54. With the way things are headed for Louisville, even 13.5 points may not be enough.

Chris Holtmann’s Ohio State Buckeyes will take on the Cincinnati Bearcats in the second loser’s bracket matchup out of Maui, set for 5:00pm ET this evening on ESPN. The Buckeyes will look to rebound from last night’s tough 88-77 loss to No. 17 San Diego State, while Cincinnati finds itself in a similar position after they fell to No. 14 Arizona in the late window, 101-93.

If they want to win games against fellow high-major competition, Ohio State is going to need more from Oklahoma State transfer Isaac Likekele. The fifth-year senior was held to just 2 points on 0-5 shooting to go along with three turnovers against SDSU. The Buckeyes’ bigs did not pick him up either, as veteran forwards Zed Key and Justice Sueing combined for 13 points on 6-19 shooting. OSU should not expect things to get any easier as they face an in-state rival known for its defense. Take the hook with Cincinnati as Ohio State continues to figure things out with all of its new pieces.

Now it’s time for the main event(s). Greg McDermott and his No. 10 Creighton Blue Jays will face off against Eric Musselman and his No. 9 Arkansas Razorbacks tonight at 8:00pm ET on ESPN in the first of two matchups featuring Monday’s Maui winners.

Creighton jumps out as a slight 1.5-point favorite in this one, and for good reason. The Blue Jays took care of a gritty Texas Tech unit on Monday afternoon, outscoring the Red Raiders 45-34 in the second half en rout to a 76-65 victory. Arkansas is obviously no slouch, however they did have a much easier opponent in front of them to begin the tournament in the now 0-4 Louisville Cardinals and promptly took care of business, winning 80-54 with ease.

This one is a complete toss-up as the line indicates, and it’s a shame that one of these great teams will have to suffer their first loss tonight. If we’re choosing sides, I lean Arkansas here strictly because of Musselman’s track record in tournament games. The Razorbacks are young and have a lot of new parts, but are the much more physical program and should find a way to pull this one out.

Rounding out this exciting night of hoops in Hawaii is a west coast battle between the No. 17 San Diego State Aztecs and the No. 14 Arizona Wildcats. Both squads have handled their business thus far, as they both enter tonight’s meeting with identical 4-0 records.

The Aztecs took care of Ohio State in Monday’s Maui opener, smothering the Buckeyes on defense while burying them from deep with 10-21 (47.6%) shooting beyond the arc. The Wildcats also got off to the races on Monday night, as they hung 101 on Cincinnati and coasted to a fairly easy win.

When looking into tonight’s matchup, I slightly favor San Diego State here as they’ve impressed against high-major competition while racking up those four early-season wins. The Aztecs shot lights out against Stanford and Ohio State in each of their previous two games and I fully expect the trend to continue tonight. Arizona does return a few key starters from last year’s squad that ended up as a #1 seed in the NCAA Tournament, however they have yet to prove that they can hang with the best of them in 2022-23. Tonight should serve as a solid indicator.

Caesars Sportsbook is now accepting sign-ups in the state of Maryland ahead of the state’s mobile betting launch on Wednesday, November 23! Register for Caesars Sportsbook Maryland today using the promo code HANDLEPICS and you can claim one of two incredible welcome offers:

The offer you receive will ultimately depend on how much money you put up on that first bet. If you want to snag the $100 free bet, make sure to wager $100 or less – anything more will qualify for the First Bet on Caesars portion of the promo.

Caesars Sportsbook is also headed to Ohio! The Buckeye State will officially launch its online sports betting market on January 1, 2023, and Caesars Sportsbook is expected to be there on its first day. Ohio-based sports bettors can get in on the action early and take home a $100 free bet PLUS a chance to win free Cleveland Cavaliers tickets when they register using the promo code HANDLENEWSTIX.

Once the site accepts its first legal wager in Ohio, you’ll start out with $100 on the house. On top of that, your name will be entered in a series of nine drawings for free Cavaliers tickets. There will be five names selected from each drawing, leaving a total of 45 free ticket opportunities on the table!