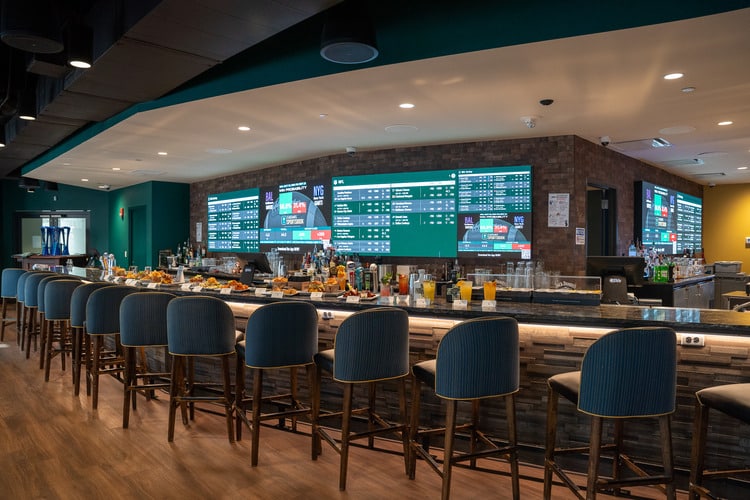 Caesars Sportsbook at Capital One Arena officially opened in May 2021, becoming the first sportsbook to be located inside a U.S. sports arena. In the 18 months since, the betting and entertainment venue’s operators have learned from the experience, and visitors can expect changes as the NHL and NBA seasons begin.

“When you’re the first to do something, you’re not quite sure what to do, so you learn and you grow,” David Grolman, Caesars Sportsbook’s senior vice president and chief retail sportsbook officer, told Sports Handle. “What we learned was that the sports betting piece was so popular that it made it a little bit difficult for folks to come in for the dining experience because we had lines of people wagering.”

As a result, the location has added 13 self-serve sports betting kiosks — it now features 20 — immediately upon entering the nearly 20,000-square-foot establishment. There are ample betting opportunities, especially on the first floor. This helps create some separation between the first floor and the second floor, which is where customers can order food and drinks from Guy Fieri’s D.C. Kitchen + Bar, a restaurant that launched this week in the sportsbook.

Fieri’s menu is arguably the most notable of the changes at the location, and it’s one that figures to be appealing to those in the D.C. area. Fieri is a Food Network star, and the menu at the new restaurant features plenty of bar staples.

“For us, it really has become a great destination spot, and I think now, the restaurant concept with Guy is really going to take it to a new level,” Jim Van Stone, Monumental Sports & Entertainment’s president of business operations and chief commercial officer, told Sports Handle.

An experience for all

Grolman and company want the sportsbook and restaurant concept to appeal to those across D.C., not just avid sports bettors. Some of the minor tweaks at the location make that possible.

The second floor is essentially a large sports bar. While sports betting is available at the location and sports betting odds are featured throughout, you don’t have to place wagers to enjoy watching sporting events on Caesars’ many TV screens.

The @CaesarsSports & Casino Truck is visiting Capital One Arena tonight for the Washington Capitals home opener. The Caps will wear a Caesars jersey patch.

The sportsbook at the venue has also made a few alterations, including introducing Guy Fieri’s DC Kitchen + Bar. pic.twitter.com/frTCQsV2Jm

For MSE, part of the appeal of the sportsbook and restaurant is making Capital One Arena a destination for D.C. residents year round, rather than just on Washington Capitals or Washington Wizards game days. With dozens of concerts held at the arena, as well as other events, having a separate entertainment venue attached within its confines gives customers another way to enjoy their experience.

“We wanted people to come two, three hours early before an event and game and stay for a couple hours afterward, and I think we’ve accomplished that,” Van Stone said.

Coupled with the fact that D.C.’s mobile sports betting scene is in disarray, it’s easy to see why the space is already a favorite of sports fans in the District.