Caesars Sportsbook Promo Code: ‘First Bet On Caesars Up To $1250’ For Mets vs. Padres

by Greg Warren
in Promotions 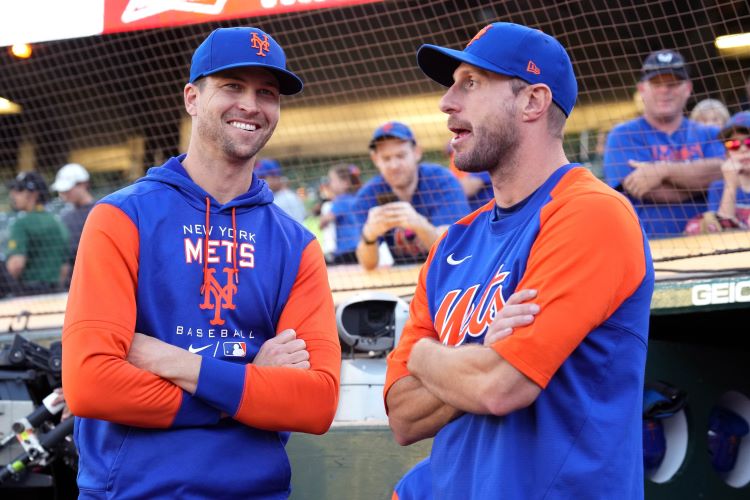 The MLB postseason is finally here!

Playoff action begins Friday with four wild card series games, but perhaps the most intriguing matchup will take place during prime time when the San Diego Padres and New York Mets meet at Citi Field, which is also the home of the new Caesars Sportsbook.

Caesars is offering one of the biggest welcome bonuses, just in time for the playoffs. Your first bet has a form of insurance on Caesars, up to $1,250, if you register through Sports Handle using Caesars sportsbook promo code HANDLEFULL. When you make your first bet, if it loses, it’s on the house in the form of a single-use bonus credit matching your initial wager, up to $1,250. Plus, Caesars is adding in 1,000 Reward Credits and 1,000 Tier Credits.

This promotion is for new account holders only and the first bet must be placed within 30 days of account creation.

Once received, free bets for this promotion will expire in 14 days and the offer can only be utilized in one state. For example, a bettor can’t claim the offer in the state of New Jersey, and then cross the bridge into New York to claim it again.

*Sunday’s game would move to 4 p.m. ET if Rays-Indians series is over in two games.*

As the top NL wild card team and the No. 4 seed, the Mets earned the right to host all three games of this series at Citi Field against the No. 5-seeded Padres.

The Padres won the season series 4-2, with those six games going a combined 3-3 over/under. San Diego outscored New York, 36-23, in those six contests.

This series will feature some of the top pitchers in baseball. New York will be rolling out the two-headed monster of Max Scherzer and Jacob deGrom. The Padres have Yu Darvish, Blake Snell, and Joe Musgrove.

The winner of this series will move on to play the Los Angeles Dodgers in the National League Division Series.

The Mets were in an intense battle with the Atlanta Braves down the stretch for the National League East title, but the Braves claimed the division crown on Tuesday, relegating the Mets to the wild card round.

The good news is that the end of the NL East race did give the Mets a chance to set up their ideal pitching rotation for the short series with the Padres. Manager Buck Showalter announced Max Scherzer will get the ball for Friday’s series opener, but he wouldn’t commit to his rotation plans after that.

There’s speculation that if the Mets win the series opener, Chris Bassitt could get the ball for the second game, leaving deGrom available for a potential do-or-die Game 3, or completely fresh for the next series to maximize his starts vs. the Dodgers.

The Mets will continue to monitor deGrom, whose last two outings were impacted by a blister on his right middle finger, although the two-time Cy Young Award winner insists it won’t be an issue for the playoffs.

There’s also uncertainty surrounding Starling Marte’s status for the opening round of the playoffs. The outfielder has been out with a non-displaced fracture of his right middle finger since Sept. 6, but he has been shagging fly balls in the outfield with the team. Hitting and throwing have been painful activities for him, though.

Marte is a combined 18-for-43 (.383) with four homers, a triple, and two doubles against Darvish, Snell, Musgrove, and Josh Hader combined, so it would be a huge blow if he’s not on the roster.

The Padres’ hopes of competing with the Dodgers down the stretch for the NL West Division crown faded with the news of superstar shortstop Fernando Tatis Jr.’s positive PED test in August that resulted in an 80-game ban.

Now, the Padres find themselves without one of their best players in a short series against two of the best pitchers in baseball.

The Padres’ trio of Darvish, Snell, and Musgrove are no slouches, either, and they should match up well against the Mets. Darvish, who was announced as the team’s Game 1 starter, has allowed just a single run in 14 innings pitched against New York in two starts this year. Starting pitchers for the other two games of the series are yet to be announced by manager Bob Melvin.

One lingering concern for the Padres is the health of pitcher Mike Clevinger, who was scratched from his start on Wednesday with an unspecified illness. Clevinger, who likely wouldn’t start for the Padres in the series but could be a valuable long-relief option, tested negative for COVID-19 on Wednesday, according to beat writer Jeff Sanders. However, his status for the series is still uncertain, and he’ll need to take another COVID test on Thursday before possibly being cleared to join the team.

The Padres are +2800 longshots on Caesars Sportsbook to the win the World Series and +1500 to claim the NL pennant.