Survey reports Proposition 26 nearing point where it could pass, but numbers markedly different than previous survey 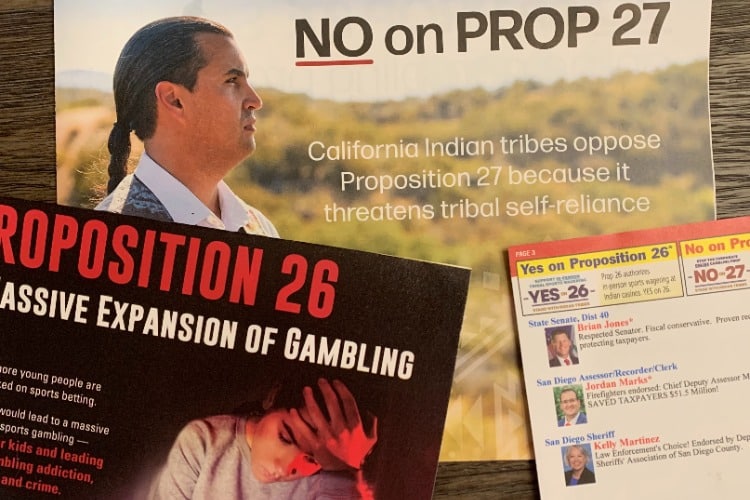 On the same day that executives from DraftKings and FanDuel essentially conceded they’ll lose on a ballot initiative to bring digital wagering to California, a new San Diego Union-Tribune/KGTV 10 survey suggested that backing for both the retail-only Proposition 26 and digital-only Proposition 27 is growing.

The survey, conducted by SurveyUSA and released Tuesday, reported that 43% of respondents support Proposition 26 and 37% support Proposition 27. Proposition 26 is backed by the majority of California’s Indian tribes and would legalize in-person sports betting, roulette, and some dice games and change the way that card rooms could be sued. Wagering would be available at tribal casinos and four horse racetracks. Proposition 27, which is backed by a coalition of seven major sports companies, would allow for statewide mobile wagering with platforms tethered to tribal casinos.

The Union-Tribune/KGTV 10 survey is significantly smaller than its LA Times counterpart. According to SurveyUSA, 1,400 people responded between Oct. 7-10, and 1,013 of them are expected to vote.

California voters will have the opportunity to vote on both initiatives Nov. 8, and have been pummeled by advertising in recent months. Earlier this month, commercial operators said they were pulling back on advertising, and at the G2E conference in Las Vegas on Tuesday, FanDuel CEO Amy Howe said the companies would “be back to fight another day.” Both she and DraftKings founder Jason Robins pointed to another initiative attempt in 2024 or 2026.

According to the most recent poll, both propositions have more support from those who sports bet or gamble at tribal casinos — the only place legal Las Vegas-style gambling is allowed in the state. Of those polled, 41% said they thought legal wagering would be bad for the state while 37% said it would be good.

Despite the massive amount of advertising on television, social media, billboards, and via direct mail, 24% of respondents said they were familiar with the propositions and 23% said they understood the difference between the two measures.

There's a prop on the ballot to legalize online sports betting in California. I suddenly feel motivated to vote!

Proposition 27  is formally called the “California Solutions to Homelessness and Mental Health Solutions Act,” and 85% of state tax revenue from it would benefit programs to address these issues. The poll showed that 65% of those surveyed said they believed the funds would make at least “a little difference” on the issue, and 37% of respondents said they would vote for Proposition 27 to support homelessness causes, as compared to 21% who would support it for legal wagering and 23% for the “well-being” of the state’s tribes.

The survey also polled potential voters on candidates, and the results suggested that both Democratic Gov. Gavin Newsom and Sen. Alex Padilla should easily win their races.

Addiction doctor: Vote no on 27

On Thursday, the Yes on 26/No on 27 campaign, backed by a coalition of 50 tribes, released its latest advertisement, featuring Dr. Anna Lembke, a national addiction medicine specialist, who calls wagering a “digital drug” and says voters should reject the measure.

Lembke is the chief of the Stanford Addiction Medicine Dual Diagnosis Clinic.