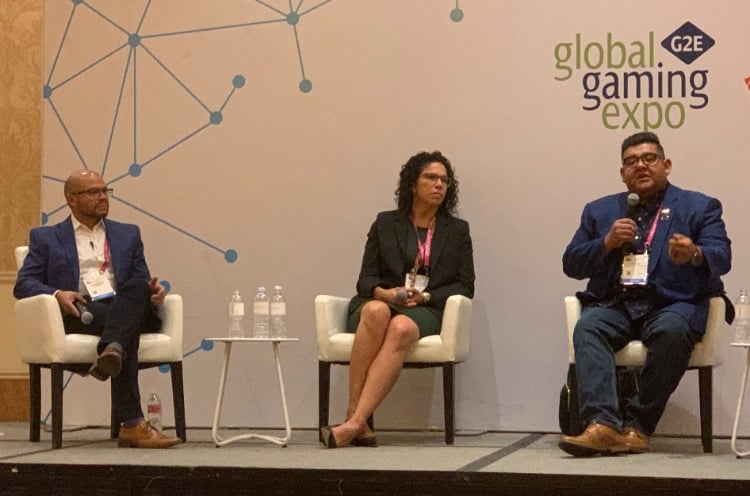 If there is anything that both California’s tribes and the mobile operators hoping to run sports betting in the state agree on, it’s that the last few months have been filled with “misleading” and sometimes “reprehensible” advertising. The final result appears to be that both the retail, tribal-only Proposition 26 and the digital, commercial Proposition 27 will fail spectacularly when California voters go to the polls Nov. 8.

With four weeks to go until the election, DraftKings founder Jason Robins said on Tuesday during a keynote speech at the G2E conference in Las Vegas, “California is usually on the leading edge, not the last state to embrace innovations.” He referred to the money being spent against Proposition 27 as funding “false and misleading ads” and went on to say that voters “just know what they see, so it makes it hard on a first go-round to get your narrative out there.”

That is exactly what the state’s tribes wanted, and they sacrificed their own shot at brick-and-mortar sportsbooks to kill the commercial initiative. But if Robins and other corporate CEOs really want to know how to move forward in California, they might have gotten a road map by sitting in on a later G2E tribal panel Tuesday. The tribes and other groups opposing Proposition 27 funded their campaign with $100 million in the third quarter of 2022 alone, as compared with $67 million by the operators during that same period.

“We’re always going to fight like it’s our last fight,” said moderator Victor Rocha, a member of the Pechanga Band of Luiseno Indians, who own Pechanga.net. “They don’t respect tribal sovereignty, they don’t respect the tribes.”

James Siva, president of the California Nations Indian Gaming Association, shared a short vignette from the Las Vegas Review-Journal, in which former California Gambling Control Commissioner Richard Schuetz told the newspaper that those backing Proposition 27 should “go to a tattoo parlor and have this put on your body some place: ‘I will never underestimate the tribes in California again. Never.’ Because if they don’t learn that lesson from here, they are completely stupid.”

Siva’s words summed up the tenor of the conversation where he, Pechanga Public Affairs Officer Jacob Mejia, and Ione Band of Miwok Indians Chair Sara Dutschke revealed that over the last year or so, as they fought commercial operators, California’s tribes were dealing with their own rifts, which they say are now being repaired.

“It’s about unity and making sure that we all have a voice and are all heard,” Siva said. “It’s about providing a future for our kids. We listen, we discuss, we fight, and then we figure out what to do.”

Should Proposition 27 fail next month — and a recent Los Angeles Times/UC Berkeley Institute of Governmental Studies poll showed that only 27% of those surveyed would support it — the question then becomes what is the path forward to legal wagering in California? FanDuel CEO Amy Howe, who lives in Los Angeles, said in her keynote that “we will absolutely live to fight another day,” and both she and Robins suggested their companies would continue to fund efforts to bring wagering to California.

Mejia countered that by saying, “I heard that the FanDuel CEO said, ‘We live to fight another day,’ and I want to tell them that if you’re fighting a tribe, you’re losing.”

Tone deaf, delusional & shortsighted. I think Jason might be getting it. Amy needs to be educated. She might live in LA but she knows nothing of California. I’m guessing bruised ego. https://t.co/fmU8L9RMwB

The tribes say the operators aren’t listening. It’s not about the money, or even about the expertise that the major operators bring to the table. It’s about sovereignty and respect.

“We think it’s incremental, get the tribes comfortable, get the people comfortable … but the operators came in and tried to jam it through,” Rocha said.

Dutschke, whose tribe is located about 40 miles east of Sacramento and doesn’t have gaming but does benefit from payments from gaming tribes, was a fresh voice in the conversation. She said that the operators promising that their version of wagering would support all tribes was not only disingenuous, but missed the bigger picture.

“They do create the the idea that this will make all tribes in California participate,” she said. “But that’s not the case. We’d be giving up some sovereignty and exposing ourselves to regulatory issues from the state of California.”

Tribes say operators don’t get it

With less than a month before the election, the Yes on 27 campaign has begun pulling back on its television advertising, though the I-15 north between San Diego County and the California-Nevada border is dotted with “Yes on 27” billboards. The message, like the sentiment from the tribes, however, seems to be falling on deaf ears.

“When they started putting up billboards around reservations that said that tribes supported [Proposition 27], it was, ‘Wow! Thank you!’ That really created more phone calls and support,” said Mejia, who believes the billboards galvanized tribes to come together. “The manner in which they undertook the campaign was reprehensible.”

The failed attempt to legalize is the second for DraftKings and FanDuel this year, after they were unable to collect enough signatures to get a digital initiative on the Florida ballot. In both states, the operators linked their efforts to an issue that they thought would draw in voters.

“They said they’d support homelessness [causes],” said Mejia. “In Florida, it was education. I hope they learned a lesson. The notion of trying to hijack the goodwill of the tribal gaming … This is a reminder to tribal leaders of how powerful they are when they come together.”