Calvin Ridley Betting Suspension Brings Out All The Twitter Takes

And of course this writer comes down on the side of ... Dave Portnoy 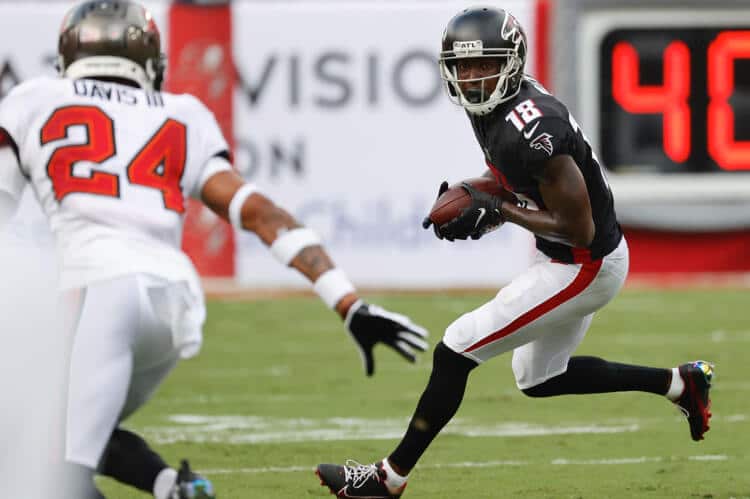 Anyway, the “integrity” bomb went off Monday, as NFL Commissioner Roger Goodell dropped it in a strongly worded letter to the parlay betting (Pro athletes! They’re just like us!) Calvin Ridley.

“Your actions put the integrity of the game at risk,” Goodell wrote in suspending the Atlanta Falcons wide receiver for the entirety of the 2022 season.

This suspension is the biggest sports betting scandal since PASPA got kicked to the curb, and of course the immediate hand-wringing began on Twitter.

But the hand-wringing wasn’t one-sided; in fact, there are a lot of hands to wring with this story.

For starters, there’s the “welp, this is what you get for embracing gambling, NFL” hand-wringers.

It is a strange world we live in with sports betting. Leagues/teams/media have embraced it (full disclosure: my podcast sponsored by DraftKings) but still verboten for players.
I get why and the difference in the actors. But strange.

I get it too Andrew. But when we as a league encourage everyone to bet on our games, advertise betting on our players’ game stats, take in big money from gambling sites & do everything we can to get our young people to embrace gambling—We can’t be surprised when this happens. https://t.co/Yhn4MwTiaL

Then there were the “hey NFL, it seems pretty tone deaf because it sure seems beating the crap out of women should be a worse offense than a few bad bets” wringers of hands.

Then there were the people who kind of pooh-poohed the whole thing. Well, at least one person was LOL-ing instead of hand-wringing.

Then there were the more reasonable takes, where there wasn’t so much hand-wringing. Just some common sense when it comes to pro athletes betting on their own sport.

Anyways, here's my somewhat nuanced take on the Ridley situation:

Do I think Ridley did anything *wrong* in the sense of hurting the game's integrity? No.

Do I think the "No players gambling on NFL games" rule is v. important w/regard to optics and the punishment is just? Yes.

Both can be true:

* Calvin Ridley doesn't have a gambling problem
* The NFL must go extremely hard on punishment, league is worth zero without integrity of their games

Of course, in the midst of all these takes, the good, the bad, and the insane, I end up siding with … Dave Portnoy and Emmanuel Acho.

Betting on your team should not be illegal. Fighters can bet on themselves. Betting against yourselves should be prison https://t.co/8OWERj6zHd

You should be allowed to bet on #NFL games as a player, the rule should be you can only bet on your team to win. #CalvinRidley pic.twitter.com/G4tyelHyFH

They’re right. I tend to agree here. Players should be allowed to bet on themselves or their team. We have reached “the cat is out of the bag” status when it comes to sports betting, and it does seem awfully … well, “hypocritical” might not be the exact word (but it’s close) when we sit here and tsk-tsk Ridley for threatening the “integrity of the game.”

I wrote about this last summer during the Evander Kane scandal, when his ex-wife accused him of betting on NHL games and betting against the San Jose Sharks when he played for them. (In the end, Kane had 99 problems, but betting on NHL wasn’t one of them.) Back then, I wrote there are basically three paths sports leagues can take with players and betting. Two of them were reasonable.

And even though there is zero chance of either happening, it’s got to be the first or the third option if it’s “integrity” we’re after.

As for No. 1: Allowing pro athletes to wager on other sports is OK, I guess, but there are certainly “integrity” issues there. I mean, Michael Jordan and Charles Barkley don’t have friends in other sports who might be able to slip them a little inside info? We’re OK with looking past that?

But Door No. 3? Simple and elegant, you ask me. If you’re a pro athlete, and you want to bet, you place your bet and it gets reported to a central office. Bet whatever you want, except against your own team. You bet outside the system? Lifetime ban. Throw the book at ‘em. But you stay in the system — which would obviously allow for the leagues to see who’s betting what and where and when — and it’s cool. Any potential shenanigans would be immediately sussed out.

I fail to see a downside here. Option No. 1 — prohibition — is a lousy way to enforce rules. Ask any history or sociology professor. Bringing everything above board? That’s the best path forward if it’s the “integrity” we’re concerned about.

Yes, of course, I understand it’s not ideal to have players betting on games they are participating in. They might try harder one day, or try less hard another day to juice the odds the following game. But as a fan and a bettor — i.e., someone interested in the integrity of the game — banning players from having an avenue to wager legally is only a recipe to have those same players betting outside the system.

Are you telling me Calvin Ridley and Josh Shaw are the only NFL players to have put a few bucks down on an NFL game in the last few years? I’m supposed to believe that?

Do the third option, bring it out into the open, make the punishment for going outside the system the sports death penalty, and we’ll probably never have to partake in this hand-wringing again.